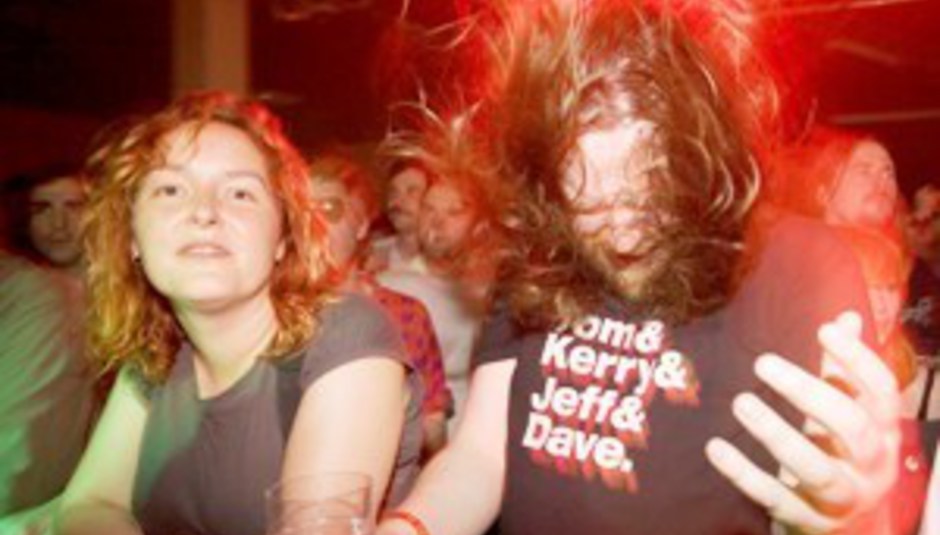 DiS’s Luke Slater heads to All Tomorrow’s Parties for the first time. He keeps a diary, of sorts, of his weekend. We run it here. Job, done. Note headbanging DiS/theQuietus dude John Doran, above right.

After much excitement and anticipation over the last few months the time had finally come. I’d finally got my arse in gear and got a ticket for ATP and all that stood in my way to losing my ATP virginity was a three-hour train journey through commuter hell. So many questions to be answered, too. Would the chalets be unmitigated shit-holes fit for only sleeping in? Would my beach football skills be as non existent as my non-beach football skills? And most importantly, was Ween’s three-hour set a typo? Surely not…

Having checked in and bought much needed sustenance (well, a loaf of bread and a block of cheddar) from the corner shop and lubricated myself with Johnnie Walker Black Label I was ready for three days of music, merriment and much messiness. For some reason, I thought that Cherry Lambrini would be a very fashionable drink today. It wasn’t, and never will be.

Off to see Vampire Weekend, and the heat inside the venue took it to another level; that of the inside of a kiln. By the time their set started I was already well moistened and I was regretting the colour of shirt I had on. Intense heat plus light grey = not good. Vampire Weekend’s performance was good, not great, much like their album. ‘Walcott’ and ‘Oxford Comma’ were highlights, but the swagger just wasn’t there, which was none too surprising given the temperatures encountered. It was a close call whether the bassist’s shirt would be completely engulfed by sweat before the set finished. Unsurprisingly, the sweat won. After retiring back chalet-wards to cool off and finish off the now warm Cherry Lambrini, Bristol experimental noise merchants Fuck Buttons were next on the list. The sound of ‘Sweet Love For Planet Earth’ budding as I stumbled through the entrance (and into about 20 people… sorry!) was euphoric bliss. It may have sounded like an interminable fuzz-drone waiting to kick in to some of my ‘uncultured’ peers, but Fuck Buttons are so much more than that. ‘Ribs Out’ was somehow more chaotic and primeval than on record, and the on-stage monkey dancing was backed up by some amazingly penetrating simian sound effects. Sebadoh regrettably didn’t live up to expectations, but they’d probably been built up too much in my head for that ever to happen. Annoyingly no ‘Gimme Indie Rock’ but ‘Soul and Fire’ hit the spot, which is more can be said for* Glass Candy*, who despite many vigorous cries of “Woooooooo!” left me wanting to go and collapse in the sandpit. Many seemed to enjoy them muchly, but not for me. Woken up by Paul Simon’s Graceland and Luther Vandross’ ‘Lovely Day’. To be fair, it was a lovely day, but nobody needs to hear ‘You Can Call Me Al’_ at 8.30am no matter how lovely the day is. Wake up with the reddest neck this side of Alabama after somehow forgetting to remember that necks, as well as arms and faces, need lotion too. A run of Bon Iver,* Born Ruffians, *Yeasayer and* Los Campesinos!* left me giddy with excitement so I let out some energy trying to co-ordinate my legs and kick a ball in between a lump of sand and a flip-flop on the beach. A bit of a failure to be honest; I blame the wind.

Bon Iver, somehow managed to sound more heart-piercingly beautiful than on record, no more so than on ‘Flume’. Men like this, who look every inch the grizzly woodsman, shouldn’t be allowed to have voices like this. By the time the crowd are singing backing vocals on ‘Wolves (Act I&II)’ everyone seemed to be in tears, though on reflection it was more likely just sweat… Hotfooted past the hotdogs downstairs to catch Born Ruffians, whose see-sawing backing chants, whooping and hollering and punchy basslines are the perfect soundtrack to the summery weekend. ‘Badonkadonkey’’s opening lines (“IIIIIIIIIIII got you in my pocket for when I get hooooooooome!”) becomes somewhat an anthem of the weekend. Meandered back upstairs less than purposefully to catch the onset of Yeasayer, who hadn’t yet started. Try and brave it in the middle of the action but end up retiring nearer to one of the several giant fans dotted around the edges; a few more of these would have been great… A little slow to get going and leaving me slightly less than enthused (Mehsayer anyone?), but once ‘2080’ (with_ that bridge about grabbing the chance to be handsome farmers / 21 sons marrying daughters and something incomprehensible about pickling), ‘Sunrise’ and ‘Wait for the Wintertime_’ are aired you begin realise what the fuss is about. Meanwhile Yeasayer’s bassist wins worst facial hair/hat combo of the festival, beating off some stiff competition. Speaking of fuss, Los Campesinos! are a band that much fuss has been made of, and rightly so. Never before has anyone been so happy to be somewhere than lead singer Gareth (well maybe when Neil Warnock’s Sheffield United were in the Premiership) is to be here performing at ATP. Seriously, he looked on the verge of tears during songs. Every member of Los Campesinos! channels this supreme delight into one of the most energetic, enjoyable and entertaining sets I’ve ever seen. It’s non stop action; cowbells, glockenspiels, melodicas and hyperactive vocals a-plenty from the first til last. The highlights were every single song (finale ‘Sweet Dreams, Sweet Cheeks’ was just a bit good…), though I realised that I couldn’t dance a single step after idiotically choosing to wear flip flops and stand at the front. A nice bit of musical ecstasy, in short.

Once again awoken by someone else playing Graceland (I still don’t get it…). The state I wake up in I did wonder whether, as an ATP virgin, I peaked too soon. In any case I decided to MTFU and get back on it. I wasn’t sure whether anything could top Los Campesinos! so decided to ditch Swedish crooner Jens Lekman for ‘exercising’ the grey matter in the pub quiz. I managed to contribute the square root of nothing after getting distracted by some football game. Surprisingly managed to come second at a festival full of music geeks (who were probably watching some actual bands or something at this point, y’know?). Prizes include: an ATP t-shirt and approximately 4,367 Jackie-O Motherfucker LPs. Really don’t feel up for watching many of the bands between Marissa Nadler and* Meat Puppets*, so instead choose to watch an epic game of cricket outside the chalet block. Some amazingly kind gentlemen come around offering Pimms and cake to those watching, which is what it’s all about really, no? Amazing scenes. After bad light stops play I will freely admit that much of the rest of the night is a blur… Meat Puppets I remember being pretty damn impressive and obviously played some classics off Meat Puppets II, ‘Lake of Fire’ was particularly raucous as well as others such as ‘Up On The Sun’ getting me going. The ‘brothers meat’ were truly tremendous. Then something about a chalet party with Jay Reatard which may never have happened, dancing like a lunatic to Mudhoney, and trying to vault into a sandpit but landing elbow first on a bin.

Two hours’ sleep really isn’t enough. Luckily I avoided managing spewing my guts up, though I think my liver probably wanted to escape my body at this point and my brain my skull. I’d never felt this emotional when leaving a festival (though I did want to bawl my eyes out when wading through the mud at Glastonbury last year…). It really was the most perfect weekend and left me contemplating, whether any other festival could beat ATP. Conclusion: probably not.

ATP returns this weekend, at Minehead’s Butlins, curated by Explosions in the Sky – check out their guide to the event here and visit ATP’s official website here.