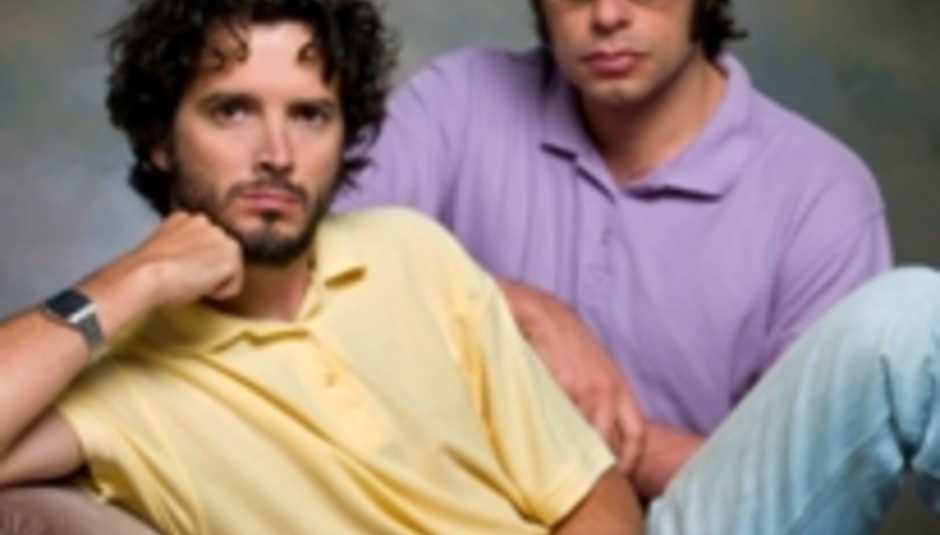 Flight Of The Conchords: comedy Kiwis on their musical dabblings

Flight Of The Conchords: comedy Kiwis on their musical dabblings

For those of us that found Vince Noir’s hair-fixated surrealism just a touch too pleased with itself in The Mighty Boosh’s lukewarm third round of instalments this year, HBO’s superb Flight Of The Conchords series was simply manna from heaven, chronicling the unstintingly lo-fi adventures of a pair of aspirant Kiwi musicians and their less-than-convincing attempts to take New York by storm.

Curiously taking their names from the protagonists of their own devising, Bret McKenzie (nonplussed-looking, overbearing fondness for animal print sweaters) and Jemaine Clement (lambchop sideburns, sulky disposition) pepper the show with songs pairing their inconsequential ramblings (“You’re so beautiful / You could be a part-time model / But you’d probably still have to keep your normal job”) with note-perfect parodies of Shaggy, Prince and The Pet Shop Boys, among others.

Indeed, it was the songs that first brought notoriety to the pair, through appearances at Edinburgh Fringe Festival, a Perrier nomination and culminating in last year’s The Distant Future EP garnering a Grammy for Best Comedy Album.

With their self-titled full-length debut out this week, DiS catches up with Bret, who is locked up in a secret location somewhere in Los Angeles, California, writing for the second series with Jemaine and James Bobin, who also helped write and direct Da Ali G Show.

With the new series, is the central premise going to be the same or will there be any change in circumstances for the band?

The world will remain the same for the second season. The band will continue to successfully fail in the Big Apple. It’s weird, actually, last time around we were able to just film on the spot but this time it has to be a bit more premeditated because people would just be stopping us in the street or trying to get in shot or whatever.

Any ideas about who you'd like to pay song-based tribute to in this series yet? Or any other musical ideas generally?

Have you written many songs which make you cringe in hindsight?

We had a song called ‘Sexy Flower’. It was a love song from me, a man, to a flower. We had one of those battery-operated toy flowers that danced when you made a noise. Jemaine sang the voice of the flower from off stage and I would serenade this dancing plastic flower. We don't play that one anymore. Mainly because we lost the flower.

Presumably you’re at a point now with the live shows where everyone knows the songs. I watched a video of an old Monty Python show at an enormodome in LA recently. Just looking at members of the audience it was more like a self-affirming thing really, everyone knew all the sketches by heart…

Yeah, with everyone just mouthing all the words. That’s been strange for us – we just try and mix up the lyrics a bit to keep things interesting. But it’s like a weird echo of what might happen if we were a serious band. I find that happens a lot actually. You know when we started it could have gone either way, we could have easily turned into a band like Ween or someone like that.

Are there any 'serious' artists out there you think have a comedic touch that gets overlooked?

A lot of my favourite songwriters have a sense of humour in their songs; Paul Simon captures moments in conversations that I find funny. Like in ‘America’, "She said the man in the gabardine coat was a spy, I said be careful his bow tie is really a camera". Leonard Cohen has so many great, dark, funny lyrics - "I fought against the bottle, but I had to do it drunk". Then there’s others, people like Tom Waits, Snoop Dogg... and Beck.

Oh, Beck (this is fairly unbelievable given there is a running gag in the show based around Americans’ inability to get beyond the New Zealanders’ pronunciation of ‘e’ as ‘i’). I’m sorry.

Don’t worry it’s fine. That Beck song, ‘Debra’, is full of great lines: "I step to you with a fresh pack of gum, and somehow I knew you were looking for some". That song was a real inspiration for our music.

What about artists displaying a comic genius even they perhaps aren't yet aware of?

Well the Black Eyed Peas are pretty ludicrous. And I love R Kelly's music. Those music videos he made, Trapped in the Closet, it just defies genre. It's seems like he didn't realise it was so funny when he was making it, but that just makes it even funnier. Actually I think we’d like to do something with that.

For many people hearing the words ‘comedy’ and ‘music’ in the same sentence is enough to make them die a little on the inside, which I suppose makes your triumph all the more remarkable…

Yeah it’s not the most highly-respected of genres is it? I hate telling people I’m a comedy musician.

What do you tell them then?

I tell them I’m a comedian and a musician.

(Laughs) Yeah. Actually Weird Al Yankovic invited us round to his house the other day.

Is there like a comedy musicians’ scene in LA then?

No, but we’re trying to start one. Just us, Weird Al and Tenacious D all standing around posing for pictures.

Have you watched any The Mighty Boosh at all?

Oh yeah, they’re great (proceeds to narrate a sketchy rendition of the arctic tundra song down the phone).

Yeah. There’s an interesting point of reference there, with ‘Hiphopopotamus Vs Rhymenoceros’ (“They call me the hiphopapotamus / my lyrics are bottomless / …”), in that they’re both comedy raps that manage to avoid embarrassing themselves completely. Are you big fans of rap especially?

Where do you think most people go wrong making comedy music?

I suppose with most of those songs you’d only really want to listen to them once, so I guess we just take a bit more time with the music. With our songs maybe people will want to play them twice.

Like their adopted city, then, give it up for Flight Of The Conchords: so good, you’ll play them twice.

Flight Of The Conchords is out now on Warner; the band have a MySpace, here, otherwise get the DVD or watch some of their stuff on YouTube.