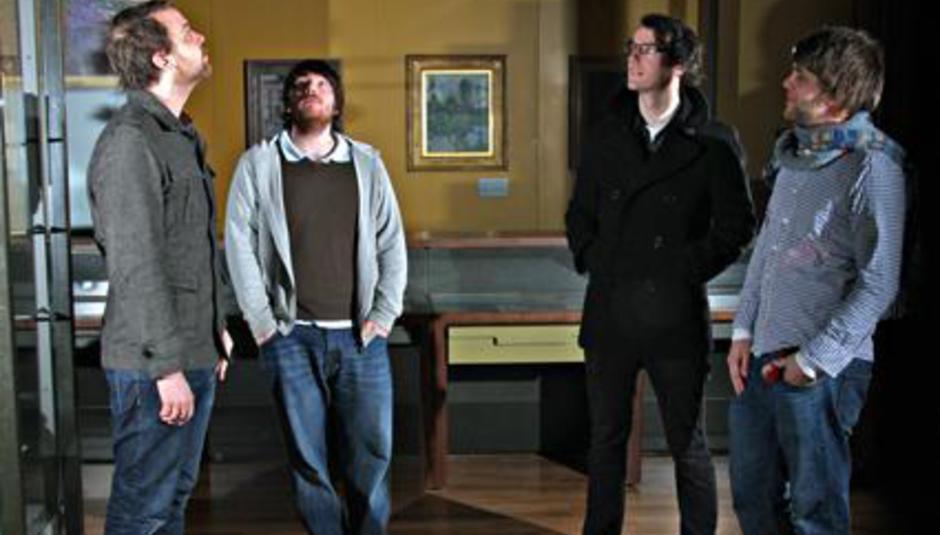 Greetings ramblers and welcome to the latest instalment of our mighty fine MySpace Trail series. This being feature number five, we’re sure you already know the script, but just in case you somehow overlooked the last four outings of spanking social-network strolling here’s the idea:

DiS introduces you to a ream of exciting new acts via the starting point of one fairly established band, e.g. #4 saw us kicking off with iLIKETRAINS and ending up taking in the extraordinary sounds of Nottingham outfit Mint Ive.

This month we’re leading with the outstanding Frightened Rabbit (pictured, top), a band currently riding a wave of critical acclaim following their excellent April release The Midnight Organ Fight, which already looks destined to nuzzle itself within many a hack’s end-of-year hitlist.

The rules themselves are fairly simple: we jaunt from top friends to top friends on each artist’s MySpace page, eight times; where we wind up, we don’t know ‘til we get there. Exciting, huh? Oh aye, one last thing, remember to click the artist names for the necessary MySpace links. Here goes… If you’ve not heard of Selkirk-born songsmiths Frightened Rabbit by now, well, you’ve not been reading DiS over the past six months have you? DiScovered by us at the tail end of last year following the release of swooshing debut long-player Sing The Greys (review), the Fat Cat-signed quartet’s sophomore record The Midnight Organ Fight (review) has been met with a salivating fountain of ink-smudged superlatives. Stabbing together clusters of escalating rhythms and soul-searching lyricism, they’ve already become one of the UK’s must-see live acts. So much so, it would take a brave man to suggest global domination is lurking anywhere but round the next corner.

Play: ‘Fast Blood’ may be The Midnight Organ Fight's next single but ‘The Twist’’s incessant key chimes and heavy-hearted vocals are at the cornerstone of Frightened Rabbit’s sound: spine-tingling, embracive and absolutely encapsulating. As their MySpace pull-tag succinctly puts it, Endor are “a simple band for simple people”. But don’t let that put you off, as the Glaswegian four-piece’s hook-bound melodies have been concocted by a detailed jigsaw of instrumentation all lovingly pieced together to create rousing streams of breezy, Celtic-tinged jangling. Following on from the release of two sterling early-days singles, the band have this year seen an already buxom fanbase swell through support slots with kindred spirits Lightspeed Champion and Semifinalists. Not quite ready to be placed in the same bracket as Broken Records or, the aforementioned Frightened Rabbit, Endor are sure to be knocking on the nation's welcoming door of indiedom by the end of 2008.

Play: ‘Fly Straight’ is a trembling, understated stomp that weeps with the traditional myopic charm of Fence luminary King Creosote. Despite being blessed with the sci-fi nerd’s band name of choice, Central Belt-based foursome We Were Promised Jetpacks (WWPJ) seem to have been lingering around the Scottish music scene for aeons without ever threatening to venture out from its insular safe-haven. But finally their time has come. Seething with a new found intent, their crisp, flighty choruses and sure-footed narratives are bolder and more purposeful than ever before, recalling Postcard-era jingle-poppery bludgeoned by a Smiths-like penchant for lyrical dexterity. Far removed from the sonic moroseness that’s long been a staple north of the border, WWPJ look set for lift-off in the very near future.

Play: It may only be a live recording but ‘Roll Up Your Sleeves’ is the perfect introduction to WWPJ, full of frantic guitars and scattershot percussion led by a rasping Scottish brogue. As much as these Myspace Trail features are intended as a careful signposted introductory pack for you to, y’know, DiScover some startling new sounds, it seems DiS has joined you in this process of blindfold learning. Aye, we’ve gotta admit, Glaswegian trio El Padre have completely slipped under our radar, yet we’re not entirely sure how. Their homemade synth-dazzled crankings are, quite frankly, a revelation; rumbling with dark layers of keys, drum-loops and guitar all smothered in Bobby Jacksonson’s fragile crow. Quite how they’ve got here is anybody’s guess (i.e. nae information’s available on t’internet and they’ve only produced one demo EP) but rest assured an excitable DiS will be doing its best to find out more in the coming months.

Play: The effects-riddled ‘Monsters In The Blue’ is a transient sprawl of synths and riff that’s as euphoric as any New Order number and just as infectious. Five steps into this eight-story MySpace Trail and a woefully unfit DiS needs to take a breather, so it’s lucky for us we’ve stumbled upon scruffbag singer/songwriter Ross Clark. Now, wistful guitar playing stool-sitters are not normally our bag, but this Glasgow-based troubadour creates wind-blowing acoustic lullabies of such striking beauty it’s impossible not to be captivated by his lonesome, fireside mew and choppy fret-picking. Already picking up a plethora of praise in the dog-eared pages of the local press, Ross’ stirring nomadic psalms rest steadily in the fissure between James Yorkston and Daniel Johnson. With a debut single out this month and an album set to follow, a bright future surely beckons for this charm-oozing romantic.

Play: ‘Anthem In Clams’’s world-weary brooding and hushed strums melt the heart with the same touching poignancy as Dylan’s Simple Twist Of Fate did all those years ago. With a name like Y’all Is Fantasy Island (YIFI), the Falkirkian quartet could easily be cast aside as blinged-up hip-hop merchants by uneducated ears. Yet, theirs is a sound that is nothing of the sort. Containing melodious wreaths of doom-laden Americana, 2006’s debut album In Faceless Towns Forever and this year’s Wise Blood Industries-released Rescue Weekend have drawn a multitude of comparisons with fellow hometown misers Arab Strap. DiS can’t quite see it – there’s a definite sprite of hope residing in their gloomy paeans that’s missing from Moffat and Middleton’s self-effacing soundscapes – but what we can see is this: YIFI should be welcomed into your heart like an orphan from the cold.

Play: Perhaps not quite fitting in tandem with YIFI’s mournful predisposition, the jaunting ‘With Handclaps’ teems down with a glorious barrage of riff and drum that expands into a ragged, infectious chorus. Anyone whose ears were entranced by De Rosa’s inaugural long-player, 2006’s Chemikal Underground-released Mend, will know just how criminally underrated this band are. Creators of idyllic, soaring Scot-pop, the Lanarkshire outfit’s debut was quilted with shivering anthems and withering laments, providing a refreshing antithesis to the luminous art-school froth exploding from both sides of the M8 at the time. Back in the studio to record album number two, the quartet have been posting demos from their Chem19 sessions as a teaser to its imminent release and from what DiS has heard it sounds every bit as astonishing as its predecessor. Perhaps this time someone will finally stand up and take notice. And here we are, right at the foot of step number eight and how fitting it is that this tartan-clad trail should finish with the rambunctious sound of Foxface. While the likes of The Fratellis and The View were off whoring themselves to every cubicle-dwelling A&R man who’d listen, this Glaswegian trio stuck to the age-old maxim of ‘gig, gig, gig’ – and what wonders it’s done. Sure, they’ll never be a band that coins it in financially but after a string of far-from-perfect early showings they’ve overcome their demons to emerge as one of the most rabid bands in Scotland today. Debut LP This Is What Makes Us was met with warm if not glowing reviews, but their blend of breakneck, early Sons & Daughters-esque stomps brushed against purified arable folk makes for an exhilarating live experience.

Play: The rockabilly horror-schlock of ‘Face Looks Familiar’ is a scintillating zenith that shrieks with inner-band tension.

Over, out. Happy DiScovering, and see you for more of the same when we next hit the MySpace Trail.