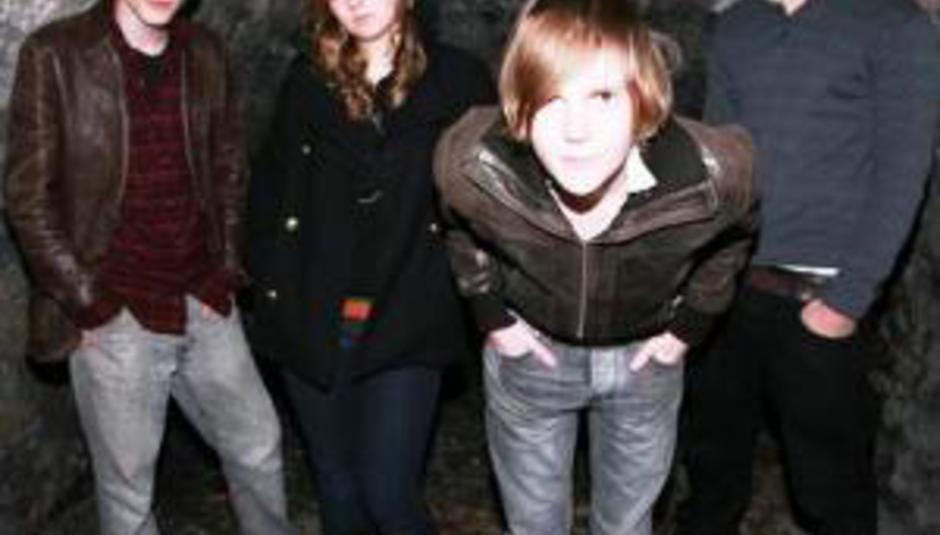 Better (slightly) late than never, our DiScover Monthly for April presents you with six new bands presently tickling lobes amongst the DiS staff. Click to MySpace pages for intoxicating sounds you might not have experienced before… Kill It Kid
Unusual moniker aside, Kill It Kid are blessed with innumerable strengths. Channelling the old school, delta-blues stomp of turn-of-the-century troubadours such as Blind Willie Johnson and wrapping it up in a contemporary package thrillingly unique, reminiscent of The White Stripes perhaps. With soul-searching lyrics relayed in Chris Turpin’s veritable roar of a voice that comes across a four-in-the-morning, whiskey-soaked cousin of Antony Hegarty’s – perfectly complementing the seductive prowl of Stephanie Ward’s, and rip-roaring tunes such as ‘Heaven Never Seemed So Close’ at their disposal, these five students from Bath exemplify a steely passion and musical flair far beyond their years. Unequivocally recommended, they’re playing live aplenty in the UK this summer – dates on their Myspace. James Skinner
MySpace The December Sound
Having initially aroused our attention courtesy of last year’s awesome Northern Star compilation Psychedelica Volume 2 (review), it was always on the cards that Brooklyn-based four-piece The December Sound would be offering aural temptations of a distorted kind before long. Soon to be released in all its white-noise, fug-infested glory then is The Silver Album, a record the band initially released themselves at the back end of last year. With several labels vying to put the album out to a wider audience, The December Sound look set to be the next outfit to follow the likes of A Place To Bury Strangers out of New York’s exceedingly vibrant noise-rock scene. Dom Gourlay
MySpace Meursault
At a time where Broken Records and Frightened Rabbit besiege Blighty with their doe-eyed tunesmithery, it’s easy to overlook the remnants of Scotland’s burgeoning musical landscape. Edinburgh-spawned ensemble Meursault may be just one edifice in that Saltire-draped cul-de-sac of sound but what a well-chiselled pillar of sonic goodness they are. Clasping together starry-eyed electronica with cotton-picking wreaths of banjo plucks and ukulele strums, their debut album Pissing On Bonfire/Kissing With Tongues is an unassuming triumph of glum-pussed Scottish charm that cradles its knees like a sombrely-lit fusion of Postal Service and King Creosote. Frontman Neil Pennycook’s piping rasp is the cornerstone of this resplendent quartet – incoherent, insatiable and entirely indomitable – yet, so deep are the surrounding caveats of sensor-tingling phonics, it takes myriad spins to uncover his voluptuous drawl. Others may have already trawled their way in to fresher, more southerly waters but Meursault are busy manning the deck and battening the hatches, eager to set sail. Billy Hamilton
MySpace Gentle Friendly
Crashing in on a wave of good will come London’s Gentle Friendly, a dazzling prospect enamoured with the same things we’re enamoured with – LA’s new noise, tracing exotic, Animal Collective and rhythm. David and Daniel (also of Peckham madcaps Buttonhead) stalk Dalston with a winning formula: salvage rusted drum kits and restaurant-grade Arabica beans from skips, toss back the beans, bang the drums until joyous resonance is reached. ‘Ride Symbols’ is the standout cut, threaded with scratched noise, beaten into ticklish bruises by fed-back shards and dumb-hearted drums; vocals playing cat and mouse in the gaps between. Gentle Friendly skitter and thrash and do all that you’d expect a new London Abe-ish Vigoda to, rhythm parts moving along docey-doe-eyed, melodies tapering up and out in traffic fumed Ferris Wheels like a more ready Fuck Buttons. It’s pretty good, is what I’m trying to say. Listen, yeah? KK
MySpace Hot Silk Pockets
Hot Silk Pockets come from Glasgow, Southend, South Wales, Yorkshire and Reading, though it was the latter province where the band formed, half an hour or so’s train ride from London Paddington. Coming together initially to play “parties in their shed”, the quartet slogged hard, graduated to living rooms and here they are now, nestling in our DiScover Monthly. The band take their name from fist-warming camping equipment and were first recommended to me by Wesley Patrick Gonzalez of Stolen Recordings shipmates Let’s Wrestle. ‘What’s the Matter’ is their finest moment to date – you wonder if there isn’t something in the etiquette and blood of this kind of music, which lands a touch closer to C81 than it does to C86, that is able to draw out the one truly great pop song within anyone who dares saunter toward it. If so, theirs is already written, a dual-vocalled effort that reverberates tenderly like if Television Personalities wrote ‘Time After Time’. Other tracks suggest there might be a lot more to come from Hot Silk Pockets though, so for now our toasty fingers remain anxiously x’d. KK
MySpace Skeletons and the Kings of all Cities
Most obvious point of reference for the abominably-named Skeletons And The Kings Of All Cities would be NYC neighbours The Dirty Projectors, fusing elements of ambient electronica, surprisingly mellifluous soul and pop into a broken-backed whole that made debut LP Lucas an undiscovered gem of 2007. Indeed, they’ll be supporting Dave Longstreth’s outfit along with punk legends Wire at the Futuresonic Festival in Manchester, as part of a string of UK dates well worth a peek this month. Alex Denney
MySpace

Check out our standalone DiScover interviews of the last month: Sam Sparro, Lykke Li, This Will Destroy You, Kyte. Forthcoming: DiScover features on My Brightest Diamond, Bon Iver, A Place To Bury Strangers, Free Blood, Fleet Foxes and more.