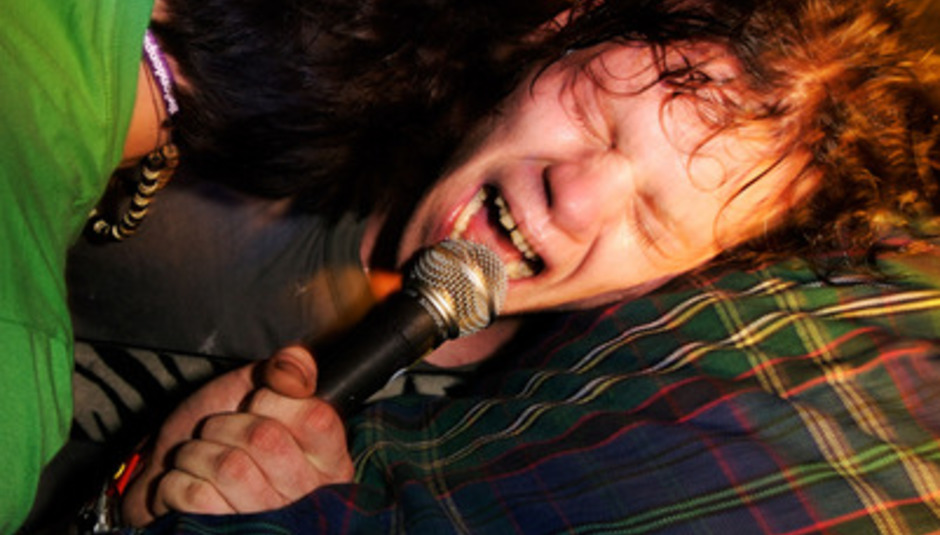 From May 6 – that’s next Tuesday, calendar-challenged sorts – the first DrownedinSound tour of 2008 is go, kicking off at the Cambridge Barfly before wrapping up on May 13 at London’s King’s College. Here’s what you lucky attendees will be seeing and hearing… Los Angeles’ The Mae Shi have performed under the DiS banner before, storming the Bardens Boudoir stage back in January as part of the Winter Warmer, so we’re super pleased to have the six-piece spearheading this tour. The band’s HLLLYH album was released to great acclaim in February, via the Moshi Moshi label; reviewed here, it’s a must-have for fans of the defunct Blood Brothers and beyond-awesome Les Savy Fav, and is also worth investing in if you’re particularly taken by the rave-singed hyperactive rock of Enter Shikari and Hadouken!. Together since 2002, since when their line-up has gone through a fair few changes, The Mae Shi are one of those stateside underground sensations that absolutely demand attention from the wider musical world – their insistent vocal histrionics and adrenaline-soaked riffs make for a heady mix of the dizzyingly intoxicating and despicably addictive.
MySpace

Video: ‘Run To Your Grave’ Birmingham – sorry, burmingharm yoo kay – trio Johnny Foreigner have also rocked DiS into a merry sweat a number of times before, most recently inciting something of a minor stage invasion at the Camden Crawl (In Photos special), but also impressing all comers at our DiScover Club events in London in January and Sheffield in March. Their EP of 2007, Arcs Across The City, earned an almost unbelievable 10/10 on DiS (review), and their forthcoming debut album Waited Up ‘Til It Was Light is stuffed full of spiky indie-pop bangers guaranteed to get their already considerable legions of fan-boys ‘n’ -gals into a sticky mess and newcomers already familiar with the sharp-angled noise of Seafood and Distophia, Sonic Youth and the Dismemberment Plan, into a similarly whiffy state. To suggest they’re one of the country’s most promising new indie bands is to sell ‘JoFo’ hella short.
MySpace Something a little easier on the ears, to balance out all the blustering sonic booming of the above-previewed tour acts, Norway’s The Lionheart Brothers collect members current and former of countrymen Serena Maneesh and 120 Days to create music that’s as melodic as the best Beach Boys material but possessed by a drone-rock ghost in the machine that’s tripping out on battery acid. The band’s debut album Dizzy Kiss was released to significant fanfare on a critical front in 2007, and recently received an official UK release following its availability on the continent. A short, sharp summary: expect modern psychedelic pop performed by masters of their chosen craft.
MySpace

Tickets to all shows can be found by following the relevant show link/s from HERE.

We’ve a pair of tickets to give away for every date of the DiS UK Tour featuring the above acts, and what’s more the winner each night will receive a signed pre-release copy of Johnny Foreigner’s Waited Up ‘Til It Was Light LP – look out for an exclusive Track-by-Track preview of the album next week, penned by frontman Alexei. To be in with a chance of winning this swag simply post the answer to the following question in the comments section below:

A) All over this land?
B) Basingstoke?
C) Your mum’s place, and you know what I mean…?

Simply post your answer below. SIMPLE. Please specify what date you wish to attend. Winners will be contacted by 1pm on May 6 via a DiS note.