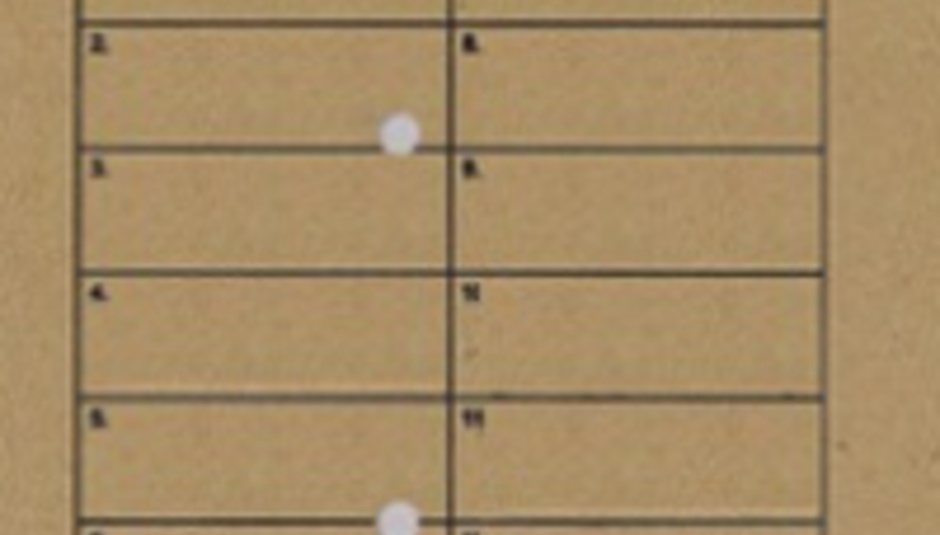 Factory Floor – ‘Bipolar / You Were Always Wrong’ (Outside Sound)

London three-piece Factory Floor make noise like pylon cables sizzling in the wet; the sound of taut menace splayed ominously overhead. A two-note guitar hook sounds out while a minimal kraut groove bleeds out over the background. Then cymbals and voices flare up like they’re trying to be heard over the tyrannical hook, before giving out, exhausted, as said hook makes plain its quietly evil victory. The B-side, ‘You Were Always Wrong’, is a leaden rockabilly death rattle that’d make These New Puritans weep into their post-punk noddy guides. Track these down like the minimal, hatchet-faced dogs they all but definitely are.

Come back, These New Puritans, we were only pulling yer legs! Skittering, paranoid dubstep with some brilliantly-deployed horns, ‘Swords Of Truth’ couldn’t be any more obtuse if it scrawled giant question marks on its behind and waggled it in our faces. The Loving Hand, aka Tim Goldsworthy of DFA, is on hand to give the 'Navigate, Navigate' a quicksilver, eleven-minute overhaul on the flip, but really you should be all over this by now.

Yet another Londoner with a Myspace wallpaper set to ‘nu-rave zebra’, acts like Ebony Bones seem carefully contrived with their shiny colours to lower critics’ resistance to that of a fuckwit dog, shitting their middle-class drawers that they might be about to miss some new pan-cultural phenomenon, hence presumably the cavalcade of rabid applause from the broadsheets proclaiming things like “this is the sound of new black Britain – hear them roar!” ‘Don’t Fart On My Heart’, despite its atrocious title, actually isn’t half bad – like The Slits rubbing a muddied teat on Bow Wow Wow’s panting visage.

While we’re on a Myspace-related theme, The Delays list their favourite three influences as The Stone Roses, Verve and The Beatles – interesting, really, since my three favourite colours are red, yellow and blue – but they’re not being particularly sharing with their new single ‘Hooray’, of which only a thirty-second teaser exists on their media player. Whatever, it’s enough – this is turgid, toothpaste-corporate indie in the manner of our dear departed The Calling.

At the risk of sounding an increasingly grumpy old man note when did everyone start sounding so fucking shrill these days? Grace, restraint – these qualities are increasingly a thing of the past with prize cretins like Kate Nash, Operator Please, Be Your Own Pet and this lot all squawking in your face for attention like grub-devouring cuckoos. A shame, really, since Los Camps! are obviously a talented bunch, but ‘My Year In Lists’ is still the kind of tune that dollops ice cream on its margarita pizza, pisses its pants and falls face down in the plate.

White Lies are clearly a great band for those who consider Editors too intensely metaphysical a proposition, ‘Unfinished Business’ being an embarrassment of stock sulky imagery that gives a textbook lesson in the art of looking moody while saying nothing of note: “Just give me a second darling to clear my head / just put down those scissors on the single bed”.

A wiser man than me once said if it ain’t broke, don’t fix it, but equally applicable to this first single off Campbell and Lanegan’s second long-play collaboration Sunday At Devil Dirt would be ‘if it ain’t broke, you don’t really need to make another one’. ‘Who Built The Road’ is an agreeable ditty, of course; a swirling country number that sketches the prerequisite shades of dark with admirable lightness of touch: “Who built the road / That left in my self esteem / Twisted and crunched / Black metal and bones”. Just don’t go expecting the unexpected.

Ladyhawke - ‘Back Of The Van’ (Modular)

Despite boasting a moniker that sounds like a female aristocrat’s name for her threpenny bit, Ladyhawke’s ‘Back Of The Van’ is a serviceable eighties MOR rocker with a wistful gleam in its eye, not two thousand miles from the likes of The Pretenders or late-period Fleetwood Mac. Actually quite pleasant-sounding given what’s gone before, this sounds a little too comfortable to get the fires burning on this most unremarkable of Sunday afternoons.

Video: ‘Back Of The Van’

Post-punk for bedwetting-types, A Silent Film are basically a waste of a sentence. Try saving yours for something else, like asking directions to the nearest shopping complex or waxing lyrical about your misguided admiration of the Nazis.

Brisk, mid-tempo patheti-pop from The Wave Pictures, with some nice gypsy violin, pleasingly cheap-sounding bass and a blithering lyric about marmalade and sculptures. ‘Nuff said.