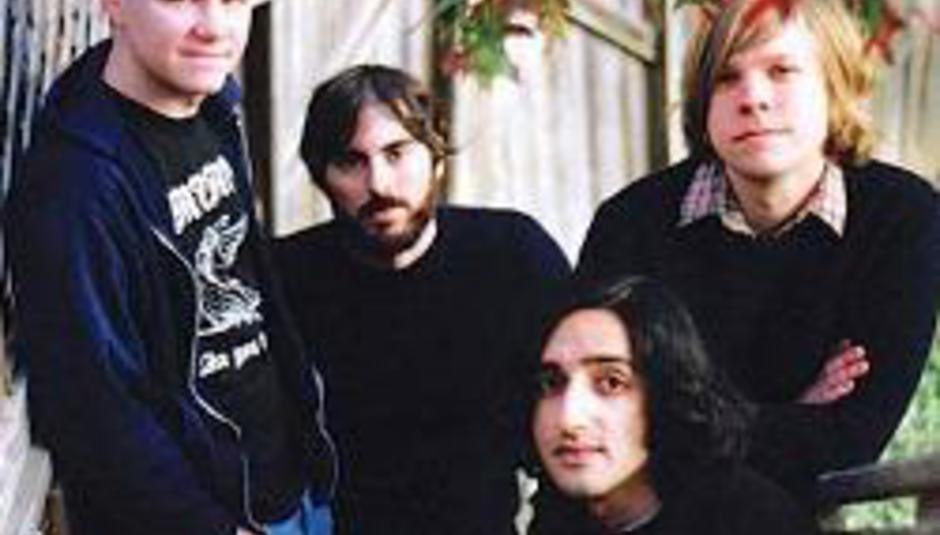 Explosions In The Sky's guide to ATP

Explosions In The Sky's guide to ATP

Explosions In The Sky are about to join the hallowed ranks of those chosen to curate All Tomorrow’s Parties – their weekend, May 16-18, is just around the corner. Drummer Chris Hrasky took some time from the dull drive through South Carolina to the final show of their recent US tour to speak to DiS to give us his guide to ATP: how the band ended up curating the event, whether anyone was left off the list and why he’s looking forward to Dinosaur Jr. Chris, over to you.

Barry [Hogan] from ATP has been promoting and booking our shows in London for a few years so we’ve been friends with him for a while. We’ve played the festival a couple of times and since we first played we’ve always been whispering in his ear about how we’d like to curate one, and I guess we wore him down. He e-mailed us late last year and said they wanted us to do it; we sent over our list and then worked from there. Is it like a summer camp for us? Pretty much, yeah.

Most of the bands on there are bands all four of us love, but I think Dinosaur Jr are my personal favourites. They’ve played such a role in my taste in music and getting into playing music when I was younger was because of them, so it’s like a feather in my cap that we’ve been able to book them.

There was a longer list of bands but there haven’t been a whole lot of bands who said no. There were a lot of bands we wanted to reunite for us, and Polvo is the only one who did. We tried to get Unwound and Neutral Milk Hotel who, from what I understand, every band who does ATP tries to get! Jawbreaker… For the most part our wishlist actually came through, though.

Pretty much everywhere we go people will bring up our ATP and either they’re going or they wish they were, and in the underground rock world it’s known as the ultimate festival, the greatest festival that anyone could go to. And that’s how we feel about it too, having played a lot of the bigger, more traditional festivals. ATP is just a totally different animal, it has a sacred position in music fans’ hearts, I think.

It’s weird for us, having been put in the same circle as bands like Sonic Youth, Shellac, who’ve curated the festival too. We’re like, “How did we get into this position? How did we get this far?” We’ve been doing this for nine years and it seems… pretty surprising and exciting that we’ve got these opportunities. It’s a pretty amazing thing for us to be in that company.

It’s great, because you can have Silver Jews and Ghostface Killah playing on the same day, but I think that’s the way ATP is, such a diverse list of bands. There will be people who are into both – I mean, the four of us are, so we can only assume that others are too.

We’re going to play the first night so we can spend the other two days just enjoying it all. We’ve talked about doing something special, maybe a collaboration, but we haven’t had any time to put any serious thought to it so it might end up being a normal type of show to us. We’ll see, maybe something will come together at the last minute. Because so many great bands are playing we think that if we play terribly people will still think, “Well, there’s still 43 other bands on the list who will play well”.

And now, Chris takes us through some of his personal selections…

Mono
We’ve been good friends with them for a long time, so it was a given that they’d be playing. The way we looked at it was trying to get as many of our friends’ bands to play, alongside the bands we’d never seen before, and Mono are definitely our friends. Mono are a band we look up to and we’re inspired by.
MySpace

Dinosaur Jr
A lot of the stuff we listen to, people might not necessarily associate with us and our music. We don’t listen to a lot of instrumental rock music, we listen to all sorts of things. When I was in high school Dinosaur Jr was pretty much my favourite band and I was pretty excited to have them accept our invitation.
MySpace

Battles
I don’t think I’ve ever seen a bad review of them ever! We heard that record, Mirrored, and friends of ours were saying “you have to hear this record” when it came out, and we all of us loved it. So it sounds like it’s this sort of a party band from another planet. We’ve never seen them live, apparently their shows are legendary and intense; they seem like a very good band, a band that people would like to see.
MySpace

Broken Social Scene
They’re a lot of people’s favourite band, yeah. They were definitely near the top of the list, we’ve been friends with them for a long time and their shows are these joyous celebrations where everyone gets into it and it’s a very positive atmosphere. It’s pretty inspiring and beautiful to watch.
MySpace

The National
Boxer and Alligator are amazing records, they’re another band none of us have ever seen. They seem to be a band where everyone is pretty amazing at what they do but also very restrained and tasteful and aware of what they do. It’s a very cohesive sound, and while they’re not exactly the most uplifting or upbeat band, they’re still brilliant.
MySpace

Four Tet
We toured the UK with him and played shows in the US and around the world – he’s a very dear friend and a wonderful person to be around and we happen to love his music. Could there be a Fridge reunion with Adem? I don’t know… Sam’s studying at Harvard and I think he’ll enter parliament one day, that’s my guess. I loved Adem’s covers record, it was great, even though I’m very biased in his favour.
MySpace

…Trail Of Dead
I’m hoping they pull out something really special for us. When we were starting in Austin they were a band who really helped us a lot, they took us out to tour in the states before anybody had ever heard our name. They were helpful in a lot of different ways and it meant a lot to us, so we definitely wanted to get them to play with us as well.
MySpace

Animal Collective
It kinda just turned out that a lot of the bands we picked go well with each other, like Animal Collective and Broken Social Scene. It really was very much like, “If we were going to go to a festival, who would we wants to see?” Whether or not they sounded alike or had anything in common wasn’t important to us, but all of these bands are bands we love and we want other people to see them as well.
MySpace

World’s End Girlfriend
It’s just one guy, this Japanese guy. It’s basically electronic stuff and he uses a lot of samples, it’s super-melodic and beautiful. He writes these 12-minute, crazy electronic, ferocious masterpieces. I don’t really know how to describe him and he’s not really known outside Japan, but I think people are going to be floored by what he’s doing.
MySpace

The Constantines
They’re a band from Toronto who we’ve loved for a long time. The way people describe them is a mix between Fugazi and Bruce Springsteen, which is very high praise indeed! It’s a strange mix but it works really well, and they’re amazing live. I feel like they should be a lot bigger than they are, I’m not sure why it hasn’t quite worked out for them.
MySpace

Eluvium
We’re big fans so again, I guess we’re biased, but we think he really pulls everything together. And I agree that it’s brave for one guy to go out there like he does, I don’t think any of us would want to get up onstage and be that alone. He’s on our label in the US and is probably our favourite band or artist on that label. We’ve toured with him a lot and we’re very good friends with him as well. I still listen to his music several times a week.
MySpace

Saul Williams
Munaf in the band is a huge fan of his and really wanted him to perform. I don’t know much of him and I’m really keen to see him, so it’ll be a surprise for me.
MySpace

Sunset Rubdown
I’m really excited to see them, they’re a side-project of one of the guys from Wolf Parade, another band who I think is really amazing. They might be the band I’m most excited to see.
MySpace

For more information on ATP, and EITS’s weekend, visit the official ATP website here. EITS can be found on MySpace here.