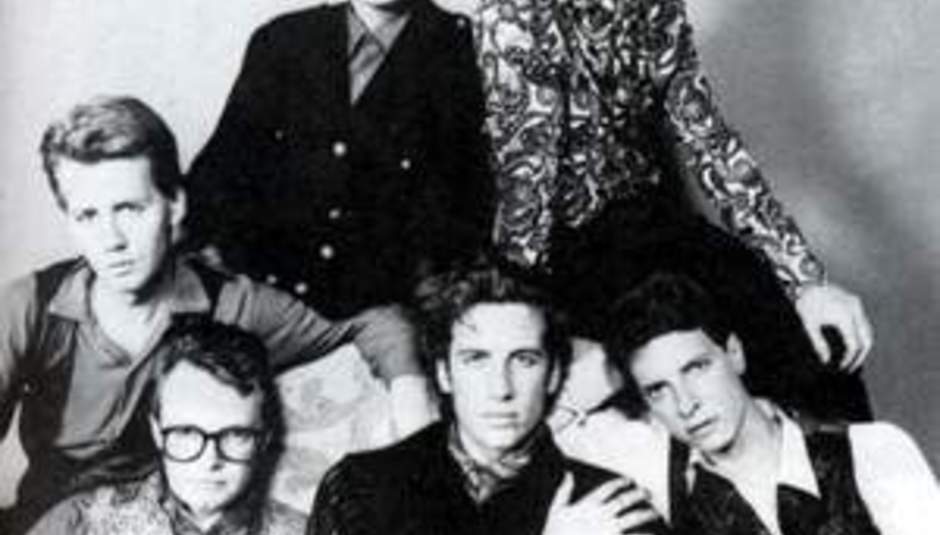 A Beautiful Waste: in search of The Triffids

A Beautiful Waste: in search of The Triffids

One of the undiscovered treasures of the 1980s, The Triffids were the Big Music soundtrack to a decade that never was, purveying a sound that was equal parts Bunnymen, Bad Seeds and Go-Betweens.

Originally hailing from Perth, Australia, The Triffids were principally the songwriting vehicle of the late David McComb, a lyricist of sunken depths whose themes of love and madness in the desert recalled Wim Wenders’ sun-afflicted masterpiece Paris, Texas, or perhaps Nick Cave if he’d been less inclined to the phantasmagoric flights of fancy that established his myth. The Bad Seeds echoes don’t end there, either – bassist Martyn Casey was later to join the more celebrated outfit, while both acts made pilgrimages to the UK in the early part of the decade to find their fortunes.

The Triffids found Domino, as it would turn out, for whom they would go on to record their 1986 masterpiece Born Sandy Devotional. With that label’s complete works reissue package now being made available, it’s over to guitarist ‘Evil’ Graham Lee to pick up the story on the three remasters that round off the collection, the band’s 1983 debut Treeless Plain, EP and rarities compilation Beautiful Waste & Other Songs, and their oft-critiqued but stylistically adventurous parting shot The Black Swan. Starting from the start (but it's not really the start of course) the first full-length album the Triffids ever recorded was called Treeless Plain. And it really is. The Triffids drove across said featureless waste more times than anyone really should in their van known as Happy Wheels. Over east, as Perth people say, they made friends and impressed people with their live shows, jam-packed full of gems of pop/rock songwriting, mostly from the pen of David McComb. They were in their early twenties and had very limited experience with recording studios.

The band recorded Treeless Plain in a dozen midnight-to-dawn sessions with a young, green recording engineer called Nick Mainsbridge (who would later work with the band on their classic Born Sandy Devotional and even later on Dave's solo album Love Of Will). Dave had put a lot of thought into how the songs would be recorded and mixed and, fortunately, his production notes still exist, because they came in very handy when Nick got the chance to remix the album in 2007. Legend has it that they finished recording with two hours to spare and the whole thing was feverishly mixed in the remaining time. Whether this is true or not, certainly the mix was hurried and no-one was ever completely happy with it. The band had the foresight to buy outright the hired reels of tape the album was recorded on, the usual practice being to take away your stereo master and let someone else hire out your old tape for their next masterpiece.

In early 2007 I called Nick in Sydney and he jumped at the chance to remix the album. It was a time-consuming and tightrope walking process. The album had to sound like the same record, only better. The aesthetic of the original had to be upheld and Dave's original wishes honoured. Imagine what it was like for Nick when the sounds of a quarter-of-a-century ago started pouring out of the speakers and the memories of all those pizzas, beers and five young musicians with ideas spilling out of them came flooding back. I think he did a wonderful job and I hope he recovers soon. Dave always had more songs than he could possibly use and most of them were very good as witnessed by the B-sides that graced official singles and the side projects that were undertaken at all stages of The Triffids' career. The years '83 to '85 were particularly fruitful. Beautiful Waste brings together a collection of songs that never made it onto an official album release but are important songs in the overall catalogue. It begins with the astonishing Raining Pleasure EP/mini album. I smile whenever I hear it - the production is brim full of ideas, sound effects, sirens, backwards tape, smoky jazz piano. It's a year or so after Treeless Plain and the bar has been raised. Jill Birt, keyboardist until then, was talked into singing the song ‘Raining Pleasure’ and it was a stroke of genius. Her innocent tones singing this song of desperate carnality make for a piece of music that was far beyond the capabilities of most of the more successful Australian acts at the time. And quite a few of them are generous enough to admit it.
- - -

Just before The Triffids travelled to the UK for the first time in 1984, all members minus Jill Birt recorded an acoustic live recording long before ‘unplugged’ was ever heard of. They were joined by a songwriting collaborator of Dave's, James Paterson, and a friend of James' - me. The songs all had a country lilt to them. I played dobro, James sang one of his songs and a good time was had by all in a recording hall at the Sydney Opera House in the early hours of the morning. It's something of a precursor to the more fully-realised In the Pines recording of a couple of years later and it was released under the name Lawson Square Infirmary. The Triffids shared a rambling, run down house in Lawson Square, Redfern in Sydney. LSI neatly illustrates Dave's quest for diversity and the prodigious output of songs he had at the time. I had no idea at the time an invitation to join the band.

Hold onto your hats as the final crystalline notes of LSI fade. You're in for the same rude awakening fans of The Triffids’ more conventional, hook-laden sounds had when the band got back from the UK at the end of '84. The Field Of Glass EP was a psychodrama from beginning to end (thanks James), with a ferocious, partly improvised maelstrom of a sound to match the tortured, twisted and sometimes very funny lyrics. It's as far as you can get from the sound of LSI as possible. Nothing The Triffids had done to this point could have prepared listeners for the onslaught of Field Of Glass. And nothing the band did since has matched it in that particular territory.

A single that was recorded in '85 but never released featuring two exquisite rockers 'Native Bride' (actually a much older song revamped) and 'Dear Miss Lonelyhearts', follows on from FOG. Much more conventional in sound, but just as forceful for that. It's astonishing that songs like these could be on the bottom of any pile. Last comes the title track, a single release from the time between Treeless Plain and Raining Pleasure. It's a majestic, anthemic song that you'd think could not fail to be a big hit, but it did just that of course. The Black Swan turned out to be the last studio album The Triffids made. The title is apt. It's often been considered a stylistic mess but we thought it just our kind of mess. What's the matter with mess anyway? I've gone out on a limb with this one, at Dave's request. He had hoped this record could be a double album when it was recorded - he knew it was so varied that it sounded like nothing else anyone was doing at the time and he thought you shouldn't do things by halves. It wasn't to be but he did write to the band members in '92 or '93 with a list of projects. One of these was to restore TBS to "the sprawling, messy masterpiece it promised to be". Those are the exact words he used. So it's presented anew with the songs we recorded at the time but didn't include, slotted in to the original running order.

Viewed from a world of MOR sampling, iPods with every song ever recorded in the known universe on shuffle, mash-ups, ten-year-old boys who can play guitar like Muddy Waters and teenagers crazy about the banjo it doesn't seem so strange. Sure - there's an opera singer on a few of the tracks, some of them are heavily influenced by hip-hop, one of them would be perfect for Van Morrison and another one is a perfect pop ballad with an incisive narrative sung by Jill Birt, and there's even a banjo or two. That was Dave's creative world at the time. I think he'd like to see it all on the one CD, well he said so didn't he? Disc two contains demos of songs on TBS and a number of songs that never saw the light of day. The demos show how fully formed the ideas were and the songs that didn't make it are of a very high standard.

We recently played some shows at The Sydney Festival with guest singers singing Dave's songs. When I tried to make a list of absolutely essential Dave McComb songs I came up with 53. We ended up rehearsing 44. His output really was of such astonishingly high quality that I'm... erm... astonished. And I hope anyone buying any or all of these will be too.

The Triffids' remastered back catalogue is available now on Domino. Their albums are, in chronological order, Treeless Plain, Born Sandy Devotional, In The Pines, Calenture and The Black Swan. Beautiful Songs & Other Waste gathers material from the Raining Pleasure, Lawson Square Infirmary and Field Of Glass EPs along with a handful of single releases.

A box set of five 7" releases from the band's formative years, Early Singles, is also available as part of the reissue package, and we're giving away two of 'em to you lucky sods - simply tell us what a triffid is according to John Wyndham's 1951 novel The Day Of The Triffids. Is it:

a.) a sort of shabby cow?
b.) a venomous species of plant?
c.) a crestfallen duck?