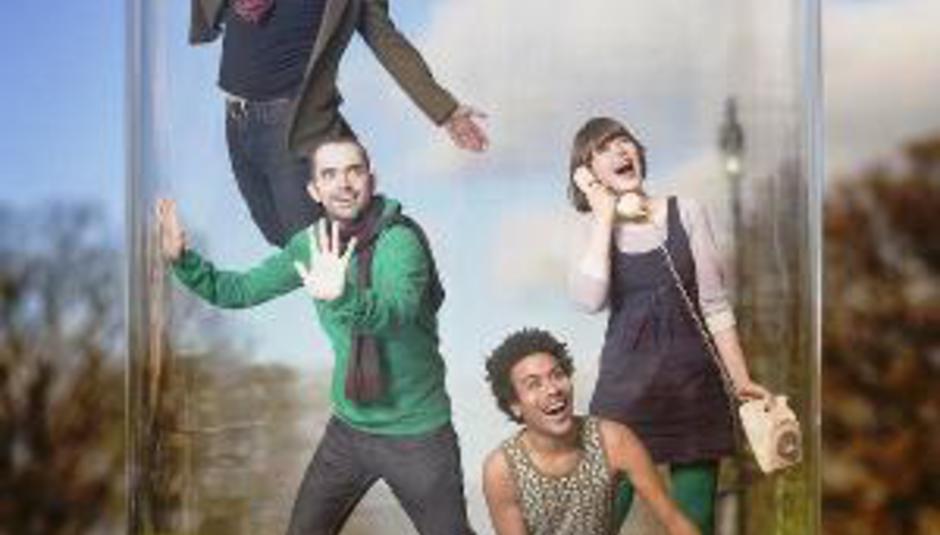 The Accidental are a new outfit formed of familiar faces. Making up the four-piece, whose debut album There Were Wolves is out now through Full Time Hobby: Sam Genders (Tunng), Stephen Cracknell (The Memory Band), Hannah Caughlin (The Bicycle Thieves) and Liam Bailey. As the line-up suggests, theirs is music broadly bracketed as folk, in the very sweetest sense, albeit with slightly sinister overtones. I mean, There Were Wolves… you get me.

I guess, primarily due to the label association, many will see The Accidental as a Tunng spin-off – a bother at all, given the other members’ roots/other projects, or is such a categorising a positive for the group?

Stephen: It’s a band in its own right. How the world and the media sees it is out of our control and not really much of a concern to me. I’m pretty secure about the work I have already done with The Memory Band and what we have achieved. All the band members have their own projects which are well respected, that’s a big part of why the writing and recording process was so relaxed.

Sam: I think anything that draws people in to having a listen to the record is great and the Tunng connection, along with all the other projects people have done, is one of those things that has helped us out in that way. To my ears this record is probably closer in sound to Stephen's previous work - the production really has his stamp on it. I think from our point of view it's just nice that people are interested.

I get the impression the band came together in a very natural, almost accidental fashion – perhaps explaining the name. Fair to say? Pleased that you’ve followed your noses and completed an album of material?

Stephen: Very much so, and we’re very pleased with the outcome. It’s been a very natural and easy-going process and great fun making the record and playing our first live shows.

Sam: Yes, it was a very natural thing. It started out as experimenting with a bit of co-writing and it grew from there... It was a very relaxing way to work for the most part because by the time we decided to make an album it was already half made. The name definitely fits, as people did come on board through spontaneous events as opposed to us going out and looking for a band.

What are you expecting/hoping for There Were Wolves? Do you think there’s a market/place out there for it? It seems to nestle oddly – not traditional enough for the folk old-guard, but not as twisted as some of the freer-of-arrangement acts circulating presently…

Stephen: No expectations at all really, just enjoyment of the process. If I worried about markets and demographics I think it would be time to give up music. I find a lot of ‘twisted folk’ acts just as boring as many traditional acts. Music for me gets interesting when people step beyond genres and rigid ideas.

Sam: I haven't the foggiest, really! It's nice that the response has been warm so far, but I've no idea where it will go. For me it was something I did for fun and to learn some new ways of making music. I find the way Stephen works really inspiring and we've both loved singing with the gorgeous voices that Liam and Hannah have so it's been a great experience whatever happens. On second thoughts... I think it's going to be huge!

Was the goal to create an album fitting any mould at all, baring in mind the projects members are sourced from – it would have been a mission to arrive at a sound entirely your own. Does the final product match any ideas/frameworks you had at the outset for The Accidental’s recorded material?

Stephen: No goals, no expectations, no master plan, no concerns about genres, that’s for other people. I’ve never understood musicians who set out with particular goals when making music; it’s a pretty alien idea to me. I believe in freedom.

Sam: It is what it is really - it's campfire late-night smoke and whisky music: the record gets better the more you drink! It took on that lo-fi warm sound early on, but beyond that we didn't think about it too much. I don't think it's a record that aims to genre bust... it's just a few songs we made and hopefully has something about it that people will like.

Are there (m)any key themes/concepts in the album, lyrical clues to an underlying framework that you’ve set the whole record upon?

Stephen: Musically the only concept we developed was using improvised voices and instruments and looping them to build the arrangements for songs. As for lyrics, I think we enjoyed the fact that we each have different takes on the lyrical ideas and never sat down and tried to dissect meanings.

Sam: Not really - there are themes that crop up like love, uncertainty and perception, but they weren't thought up beforehand.

Is touring a problem given your ‘main’ pursuits? Do you hope to commit to a proper tour sometime in 2008, perhaps ahead of festival appearances?

Stephen: We have no plans to tour in the normal sense; it’s not something that excites me that much anyway. We will be playing live when we can, which we enjoy very much. We’ve had a great reaction to our live shows so far so I can’t see us stopping.

Sam: At the moment there are no big tours planned... we've got a few dates lined up but we're pretty busy. Who knows in the future, but at the moment we're probably going to keep it that way. Things are pretty hectic.

The album cover’s a bit spooky – does the band believe in ghosts, and if so what do you make of that Yvette Fielding, eh? Running about in falling-down castles… tsk.

Stephen: I have no idea if the rest of the band believe in ghosts, I don’t think we’ve ever discussed it. I had to Google Yvette Fielding to find out who she is. I suppose I’m a bit of a freak because I don’t own a television. I think lyrically on the album there is a good balance of the direct and the mysterious, things being both descriptive and suggestive.

Find out more on The Accidental by visiting them on MySpace. Live dates: