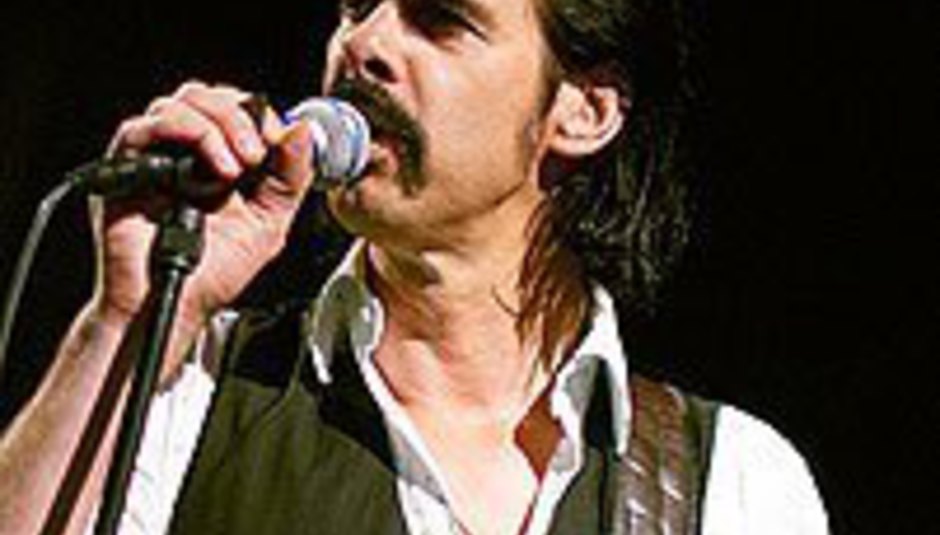 Dig!!!ing through the catalogue: five of the best from Nick Cave

Dig!!!ing through the catalogue: five of the best from Nick Cave

There’s no two ways about it: Nick Cave is so hot right now. Having cast off the shackles of conscious grandeur assumed on Abattoir Blues / Lyre Of Orpheus’ sprawling two-disc set with the baboon-twatting brilliance of the Grinderman project, Cave returns to the fray in his Bad Seeds role next week with Dig!!! Lazarus Dig!!!.

The video to the lead single of the same name should have given you a clue as to where we’re headed, Cave strutting around like he just don’t give a care while sporting a moustache that practically screams ‘rediscovered mojo’. Even the title seems like a casual lording of his literacy over the mewling monosyllabs that have followed in his wake (ahem), so what better time to linger a while on past achievements with a brief guide to some of the highlights from his career? It’s easy to forget how fucking strange the early Bad Seeds records were, and Your Funeral, My Trial knows it better than most; a muffled sob from the well of Cave’s deepening heroin addiction. The otherworldly elegance of ‘Sad Waters’ and ‘The Carny’’s hideous, Freaks-referencing slope are choice cuts but there’s so much that’s enjoyable in the performances it’s difficult to know where to begin – the minimalist, lonesome washes of ‘Stranger Than Kindness’, the way Cave’s vocal falls in and out of step on ‘Jack’s Shadow’, or how the cover of Tim Rose’s ‘Long Time Man’ aims at anthemic but winds up drunk and depressed. Difficult, but engaging. My personal fave, this; the perfect combination of the primal murk of early Bad Seeds and the classic songwriting guise Cave was to pursue throughout the ‘90s. ‘The Mercy Seat’ is maybe the defining Cave screed, a tale of justice divine and secular narrated by a death row inmate with hallucinatory intensity (“a ragged cup, a twisted mop, the face of Jesus in my soup”), the band doing a pretty fine job of evoking what it might sound like to have 10,000 volts zapping through your head. Also boasts an especially fine pair of ballads in ‘Slowly Goes The Night’ and ‘Watching Alice’. Cave followed the epic narratives of Henry’s Dream with Let Love In; one of his most accessible and purely enjoyable records and a great starting point for the uninitiated. ‘Red Right Hand’ is a terrific showcase for the Bad Seeds’ film noir flair, ‘Do You Love Me?’ is a masterpiece of brooding tension with some knockout lines (“She had a heartful of love and devotion / She had a mindful of tyranny and terror”), while ‘Nobody’s Baby Now’ and ‘Let Love In’ represent some of Cave’s most concisely melodic offerings to date. In retrospect the self-parodying overkill of Murder Ballads feels like a clearing of the decks for The Boatman’s Call; Cave’s most intensely personal album to date and the record that introduced a more sombre, contemplative persona that eschewed the teeth-gnashing sarcasm of yore. Cave’s gone on record recently saying he can’t think back on the record without a wince, a protest from his inner Aussie that such navel-gazing should be prompted by a ‘fucking sheila’, or something. Worry ye not, Nick – ‘Into My Arms’ is probably the most perfect love song you’ve ever recorded. ‘Nuff said. For those who found Abattoir Blues / Lyre Of Orpheus’ Lear-like blustering occasionally difficult to get along with, the Grinderman project was simply a breath of hot, bilious air. Cave’s occasionally struggled to find his muse after the sex-and-death narratives of old played themselves out, but this record finds him supremely at ease with himself; not rolling back the years per se but letting it all hang out with a panache that reminds us why, ‘til someone learns to do it even a tenth as good, we need this man in our lives. And yes, we’re still loving the ‘tache.

Dig!!! Lazarus Dig!!! is out on Monday (March 3) through Mute Records. The Bad Seeds will play a brief tour of the UK in May, in the meantime keep 'em peeled for an interview with Nick Cave on DiS next week.