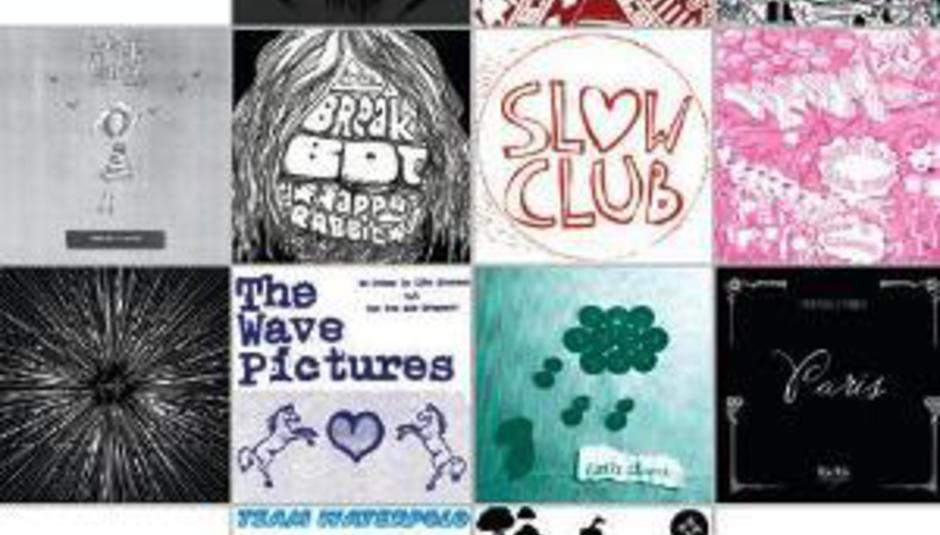 With the label turning ten years old this year, DiS figured there was no better time than the present to touch base with Moshi Moshi Records for our latest Label Profile.

The label is to release a compilation of its Singles Club releases in March (art pictured) – featuring Kate Nash, Friendly Fires, Slow Club and The Wave Pictures, it’s a neat snapshot of the platform that Moshi provides emerging artists. No ‘Caroline’s A Victim’, no BRIT Award. Maybe. They’re in the business of albums, too, with recent successes including Au Revoir Simone, Hot Club De Paris and The Mae Shi.

We are a team of two halves, mainly Michael McClatchey and Stephen Bass aided by Hannah Moshi and Rich Moshi. But perhaps the most important half would be the mismatched collection of musical acts whose recorded musical output we are responsible for. Currently this includes The Wave Pictures, Slow Club, Hot Club De Paris, Lo-Fi-Fnk, The Mae Shi, Au Revoir Simone, Tilly and the Wall...

Why did you start Moshi Moshi? Give us a potted and personal history.

It was started by friends who were working in the music industry and spent a lot of time going to gigs and festivals and wanted to get their hands a little more dirty and have better excuses to go to gigs and festivals; perhaps it was born of the frustration that can be felt when working at the bigger labels. We wanted to work with music we liked as opposed to what we had to work with at the day job over which we had no control. This was ten years ago. We found a band we all liked and persuaded their lawyer that we should be releasing a single by them. We spent six months around this time trying to agree on a name. And then the first single came out which I seem to remember had a favourable review in _ NME_ which made it all seem possible.

You’re a trendy London record label that signs trendy bands that trendy people buy and listen to and occasionally dance to in trendy clubs. Is this all true? If not, dissuade us.

Ugh. We seem to often be called trendy or ‘über cool’, and while perhaps meant positively I really think that it is counter-productive and misses the point. I would rather we were seen as a successful forward-thinking record label that gave its artists great respect and service and only released great music than just trendy. Trendiness is so ephemeral and ultimately pointless. To release music that means something to people and to do it well is our aim. Obviously beautiful trendy people buy our music sometimes, as well as the freaks and misfits that we love, but I think that is more because we try and find new and challenging music that isn't the same as everything else around. Perhaps the venn diagram of people that like this music might include the occasional trendy. And who doesn’t like a trendy club every now and then anyway?

Moshi Moshi is ten years old this year, but has really only risen to a steady level of releases in the last four or five years – why the sudden stepping up of output? And, more importantly, what the hell were you doing for the first half a decade.

I think we realised we needed to up our game. And also it took a while for people to begin to take us seriously. By the time that we were going to check out Bloc Party we were in a position that when we tried to persuade them to do a single with us we had actually got a known name and had proved that we weren't completely useless. On top of this Michael Moshi became jobless and decided that he wanted to be penniless and sleep on his sister's sofa for a couple of years so that he could work Moshi Moshi fulltime. This made a huge difference, both to Moshi Moshi and Michael's posture. In the back of my mind it was always meant to be a proper company and it took a leap of faith at some point to make that happen. I think that we still have another level to step up to though, and we want to do that soon.

Rumour has it that a select number of you are also ‘hot’ A&R executives for bigger record companies. Does this make Moshi Moshi a vanity project? Or a much-needed source of relief from the pressure of the boardroom?

Ha. Moshi Moshi is in no way a vanity project. It's been ten years of hard, expensive, fun work that has required real dedication and taken up a large part of our lives and taught us a lot. Many friends and many places have been encountered on the way. One of us works in A&R for a major, but the reality is that working for a major record label is a much slower pace and also there are people above you that you have to consider when looking for things to sign. We are in charge at Moshi Moshi. In reality the list of bands that have released music on Moshi Moshi is a much better representation of my A&R CV as opposed to those I have signed to a major label.

You seem to have a high ‘hit’ rate – or at least a pretty impressive level of quality control. How do you manage that?

Every label has its glory years, its peak period where everything they release is frankly, shit hot. Have you had your glory period yet? And if so, what was it?

I hope not. I think we are working up to it. The last four or five years have been good, and we have made a concerted effort to avoid 'punts' and only work with bands we really believe in. There are sometimes slight differences in opinion between us. I think as we grow and manage to keep bands things will get better. There are a few over the years that we have tried to work with but haven't been able to, mostly for budget reasons. It would be nice to have a bit more flexibility on that front.

What Moshi Moshi release are you most proud of?

Personally, so far, Hot Chip. But there are so many. Love the Architecture In Helsinki record and some of the Tilly and the Wall songs are _so_ good. Really excited about both Slow Club and The Wave Pictures. Each of our releases are special.

Video: Hot Chip, ‘Down With Prince’

** You see bands like Hot Chip and Bloc Party go on to achieve huge success. Does this make you proud? Or is there a slight sense of ‘what if’ as you bite your tongue at the high chart positions?**

It makes us proud. Especially with Hot Chip. We spent perhaps 18 months working really hard with them and I like to think we did a great job to help build them a really solid career that is now beginning to really take off. In the early days we do a lot of pushing, trying to get our bands to play shows wherever possible, and in as many territories as possible and we try to be as ambitious as we can for our acts. As far as we are concerned what we are releasing is pop music and if presented in the right way, carefully, there is no reason for our bands not to reach large audiences and make a living as musicians.

You made the transition from singles label to a longer-term home for artists in the last couple of years. What was behind this decision? Is it economically viable to run a purely singles label?

We have been releasing albums for years, with varying degrees of success. Our first album release would have been a couple of years in. It is very hard to run a singles label economically. In fact I would say that if you are serious about it and want to make a living then it is impossible. As an offshoot it works just nicely.

From your current crop of bands on the label, which ones do you see releasing ten albums and becoming hoary old rockers of much repute?

I think The Wave Pictures are such natural songwriters they will be going a long time. They have already self-released four albums on CD-R. Hopefully all our bands will continue and thrive.

** Moshi Moshi seems to be a halfway house, between the big stage and The Royal Albert Hall with a load of cocaine and super indie bands playing to two people in a back room. A fair assessment? Are you a ‘grooming’ stage for future success? Your track record suggests as much…**

No we aren't. That's just a result of circumstance which we are slowly and organically changing. We aim to be as big as Domino or XL but it has to happen at its own speed. If we lose a couple along the way it's okay as long as we do a good job.

Moshi Moshi seems quite traditional in many ways – do you embrace the digital age? Or wave a gnarled stick at it?

We embrace it wholeheartedly. You have to. We are traditional too, though. We come from a background of working at record labels. We like to do things properly. Make sure we have great press and promotional people, not just stick a seven-inch out there and hope it works. We like the artwork to be representative of the band and something to cherish. We like bands to be great live and have a sense of identity. The traditional thing of having great music and great acts performing great music well is a good thing. And I believe the best bands are those that give you a reason to buy into them wholeheartedly and want to see them play and wear their t-shirt. That really gives you something to believe in rather than just passing time for three minutes until the next thing comes along to distract you.

Given that apparently the big record labels are having a hard old time of it, does that mean it’s easier for companies of your size to thrive? Or do the big labels not ultimately affect the output of an indie?

It's tough for us, too. Record sales are definitely down. People consume music differently. Piracy affects indie labels much harder than it does majors as we do not have huge back catalogues or big hits to fall back on. So everything is tough. But we choose to be optimistic. We firmly believe that if we can ride out the next two to five years then there is no reason for us not to be as successful as anyone. The modern world allows David to take on Goliath. If we are patient and can keep our nerve it'll all come good! The big record companies have different ways of working. We are far more nimble and slim-line. We can't cut staff as we operate on such a small staff anyway. We are already operating in the way that the major labels are realising they are going to have to in some ways. So it's not easier for us, it's just that we are perhaps more adapted to the modern world.

4: Dance To The Radio