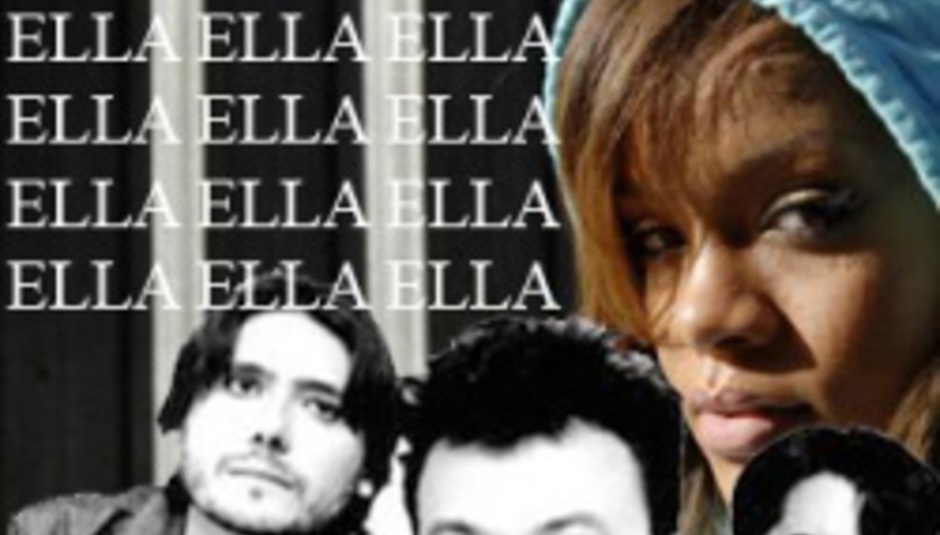 There’s an old story that, somewhere back in the purple haze of the mythical ‘60s, John Lennon secretly wanted to be in the Rolling Stones to snatch some of the bad-boy cred that eluded him with the day job, and that likewise, Mick Jagger, being the super-ambitious, proverbial cold fish he is, thirsted after mop-topped glory as a gazillion-selling Beatle.

Whichever side of the fence marked 'credibility' you’re sat on, it seems, the grass is always greener on the other side – hence, one might reasonably assume, Manic Street Preachers’ recent decision to cover Rihanna’s torrential über-hit of last year, ‘Umbrella’, and KT Tunstall’s forthcoming B-side version of Bloc Party’s ‘The Prayer’.

Our advice? Stick to what you’re good at.

Now, we’d hesitate to give you the official DiS verdict on the Manics’ effort, which will be given away as part of a free covers CD with NME next week, but suffice to say it has a widdly guitar solo in it, a gesture somewhat akin to gluing a prosthetic leg onto a millipede called Anne Boleyn. Tunstall actually acquits herself more respectably, but more to the point, well, what _is_ the fucking point, exactly?

If you listen closely to the end of that Tunstall track, you’ll hear the cracked-velvet tones of one who has a lot to answer for. Jo Whiley’s Live Lounge is like some kind of pop Auschwitz, slaughtering the hits and belching out the foul black smoke of assorted pointless schmindie covers, assorted horrors available in handy disc format from late last year.

Hope springs anew, however, in the form of Klaxons’ hooking up with Rihanna herself for yet another ‘reimagining’ of ‘Umbrella’ at the BRIT Awards this evening, but just in case they were thinking of coming a cropper, here’s a list of five recent indie-pop covers that went down like an Eskimo’s balls at bathtime, i.e. not at all...

The Flaming Lips ‘Can’t Get You Out Of My Head’ (YouTube) – On which the Oklahoma psych-warriors go down the Nick Cave route of possibly taking Kylie Minogue too seriously by stuffing her career re-launching classic with portentous strings and tremulous drum rolls to accentuate the song’s creepy lyrical undertow. Points for trying and all, but really, you can’t help but miss the hotpants.

The Arctic Monkeys ‘Love Machine’ (YouTube) – Where's me washboard? The Monkeys finally justify those George Formby comparisons with a shonky skiffle cover of Girls Alouds’ finest moment to date. Squint your eyes a bit, and – actually no, it’s still cack. But at least it seems to have been recorded in a slightly more generous spirit than the usual ‘here is a disposable chart hit I’ve deigned to transcribe into sacred rock text’ condescension.

Panic At the Disco ‘Maneater’ (YouTube) – Icons of emo and punctuation litterbugs PATD’s take on Nelly Furtado’s awesome tune is little short of desecration, tossing around pointless jazz chords like shit-smelling confetti. The whole thing sounds like it’s being constantly sped up to some imagined climax 30 minutes in where their awful harmonies sear and bend ‘til they’re in unison and a voice announces calmly that you’ve just wasted half an hour of your life.

Xiu Xiu ‘Under Pressure’ – Absurdly fiddly avant-indie armpit sniffers get down and dirty with Fred 'n' Dave’s 1981 fist-clenching anthem? Pass the razorblades on toast. But wait, come back! Away from the luvvie histrionics of aforementioned pair at their eighties worst, Xiu Xiu offer a surprisingly forceful reminder of the song’s roots as a tale of a man on the edge, squalling free-jazz sax and everything.

DiScuss: is there any merit to be found in indie acts covering pop hits? Is knees-up bonhomie ever an excuse? And what about vice-versa: can pop do indie well? Support your argument using examples.