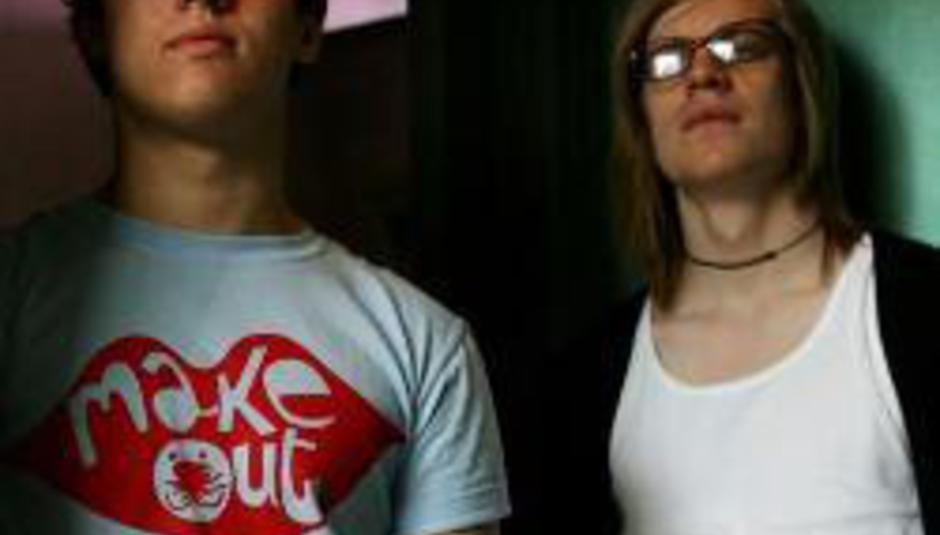 Hoping for... sped-up power ballads? I Was A Cub Scout reveal their epic intentions

Hoping for... sped-up power ballads? I Was A Cub Scout reveal their epic intentions

“The number you have dialled is not in service. Please try again later,” says the infuriatingly pleasant automated lady on the other end of Todd Marriott’s mobile number. Try as I might later, Mrs Automation is as close as DiS is getting to the I Was A Cub Scout vocalist on this occasion. Handily, the band’s label XL save the day with a number for his musical other half, sticksman Will Bowerman.

Now usually ‘round about this point alarms bells would be ringing. “The drummer… maybe the singer can’t be arsed?” But I Was A Cub Scout aren’t your average band. For a start, there are just two of them, co-dependent on keeping the creative plates spinning. As an added bonus, Will proves himself to be a total gent in the process. Result.

With a full-on UK live jaunt pencilled into the calendar and a significant little ‘x’ marked on February 18 for the release of debut album I Want You To Know That There Is Always Hope, DiS limbers up for a month-plus onslaught of IWACS loveliness, and speaks to Will about the band’s achievements to date, hopes for the future and the usual dolly mixture of indie-rock jibber jabber.

The album release is nearing ever closer – are you wetting yourself with fear or excitement yet?
I was kinda nervous, but we’ve let some people hear it and their response has been positive so I’m coming around to excitement now. People are saying it’s great, so we’re chuffed. We just want to push ourselves now.

Have you listened back to it much?
I’d love to say I haven’t and pretend to be cool about it, but I’ve listened to it loads. In all the bands we’ve been in before we paid for the studio time ourselves and recorded three, maybe four tracks, but with this we got to go and record a full, professional album. With singles people only get one or two tracks and I don’t think you really get a full sense of the band from that. As a piece of music, as a piece of art, we can showcase all the different elements of the band and you can really get a feeling for where we’re coming from.

No doubt people will inevitably talk about Hugh Padgham (XTC, Genesis) helming the production, but it’s understandable as he hasn’t really done anything in this sphere before. How did you end up working with him?
When we were doing some earlier tours we would drive around in my car and when we reached London we would listen to Magic FM. Every time, without fail, Phil Collins’ ‘In The Air Tonight’ would come on. We just waited for it. We loved how big it sounded with the drums and everything, so we said to our manager, “Let’s get the guy who produced Genesis” for our record. By chance, someone at our label knew Hugh and set the wheels in motion. We couldn’t believe it but he came to one of our London shows and he really enjoyed it. So we recorded ‘Our Smallest Adventures’ with him, and we loved how it sounded. He seemed the obvious choice for the album after that. When we searched for his name on Wikipedia and saw the names of the bands he has worked with in the past, it’s quite phenomenal that he would even consider doing our album, but he did.

Maybe he saw it as an opportunity to reinvent himself, to challenge himself with something outside of the comfort zone?
Yeah I think there are now some newer bands speaking to him about producing them. So I suppose it will help his career too.

It’s a smart move on your part, as it means the record is less in danger of sounding dated in a few years. A lot of current bands using more obvious producers will inevitably fall into that trap.
It’s definitely better than going with the safe option of whoever is the trendy guy at the time or whatever. If we used a producer who is known for indie records, or new rave or something, people might just think of us as another one of those kind of bands, which we’re not, obviously.

The proof is in the listening. He’s definitely captured the more ‘rock’ inclinations of the band, which might catch some people off guard.
His production is fantastic. It sounds incredible, really. It’s funny to hear what you’ve written, recorded so nicely. Hugh captured exactly what we had in our head and when we listened back, we had to pinch ourselves, like, “God, this is exactly right”. We’re very proud of it and can’t wait to get on the road and play all the new songs to people. Halfway through the tour the album will be out and people might know it by then, as opposed to just knowing the singles. The guy we worked with before, with him we were happy just to get professional recordings; but when we listened back to them it just wasn’t how we wanted to sound. We wanted a bigger, epic sound with lots of reverb and echo.

Will you be able to replicate the album live or will there be an element of compromise, given the natural two-piece limitations?
The majority of it we can play as a two-piece. We were keen to make sure of that while we were recording. We could have gone completely overboard and thrown loads of things on it, but we knew that when we played it live the songs would be different and people might feel let down, so there’re really only a few moments in the set when we’ll need to call on a helping hand.

You’re heading out to South By Southwest after this UK tour – are you nervous about that?
We’re really looking forward to it because it’ll be like a cool holiday where we get to see a load of great bands that we might not otherwise see; bands like Russian Circles, Maps & Atlases, Tera Melos. And then you’ve got UK acts like Lightspeed Champion and These New Puritans playing, too. It’s such a strange affair though; you have people as diverse as REM and Dolly Parton playing it, too. Should be great fun though.

Hold on… Dolly Parton’s playing SXSW? You gotta go see her. That would be surreal if nothing else.
If I get offered the chance, I probably will. But we’re both under 21 and I’ve heard they can be quite strict about getting into bars. We’ll have to devise a scheme to sneak in or something. It’s a bit unfair really because I haven’t had any alcohol in about four years and Todd rarely drinks either.

It’s all typical hell-raising rock ‘n’ roll stuff on the IWACS tour bus then?
We never really go in for the whole partying scene thing. ‘I Hate Nightclubs’ is all about that. It was based on a club in Chester we went to which was just hell. Everyone was totally wrecked, drunk and bumping into us and it wasn’t our idea of fun really. We’re not a very rock ‘n’ roll band in that sense, we’d much rather have an early night.

In a way, that’s kind of refreshing. Especially when the media propagate a myth of today’s youth as Skins-style reprobates, high on drugs and stuff.
Literally all the people we used to hang out with got into drugs: this guy who played guitar in one of our older bands is a total addict now. I even left a friendship group because they all got hooked on drugs. It happens a lot round our way because there’s not a lot to do so people turn to drugs. ‘Recommendations’ is about people we know back home who are really into ketamine and stuff, and we hate all that. So the song is about recommending them to stop, basically. It’s all very small town stuff. Stories about people, high points, low points.

So it’s not just boy/girl teen angst in the lyrical department then, there’s something more going on?
With the lyrics, we used the feelings of the moment with girls back home and things like that. It was a very emo kind of attitude, admittedly, but it worked out great for us. I think it made for sing-along but sincere songs. With direct and honest lyrics people can connect to the music better than, say, “Daft Punk’s playing at my house, my house”. A great song, but you can’t really connect with it in the same way.

The album title – I Want You To Know That There Is Always Hope – is a bold statement. I guess in the context of former friends being hooked on drugs it works on several levels, it has a certain gravitas.
I’m a big optimist, but at times on tour Todd can get quite down and he’s a very deep person. With the album title, we were on the way back to the flat after recording one night and the word hope just seemed to describe exactly how we felt about everything. It summed up our emotional state: we hoped the album would do well and we hoped it came out how we wanted, and we were hoping for a lot of things. I think hope is a very positive word and sends a good message. Todd said one of the older lyrics on the song ‘The Hunter’s Daughter’ was “I want you to know that there is always hope” which isn’t in the song now, but he thought it would make a great title. Especially as a lot of bands don’t seem to make statements or use phrases any more.

I’ve read some things that suggest you guys have felt somewhat misrepresented in the press in the past, how do you hope the critics react to the album?
‘Pink Squares’ had a lot to do with that, and it was a bit of an accident. It was the first people had heard of us and they thought they knew what we were about, like we were this twee indie band, but the sound of that song was never what we set out to be like. It was originally going to be a b-side. When we came back with a much more rocking single, which was much closer to what we’re about, people didn’t take to it. So we used a guy who’s into power ballads for a reason. If someone says that we’re a band who write power ballads, we will be quite chuffed about that. We think of our songs as sort of sped-up power ballads, because there’s so much feeling in that kind of music.

There you have it. I Was A Cub Scout want you to think of them as modern-day torchbearers of the much-maligned power ballad. And you thought they were ‘tweemo’. Pfft. Remember kids, next time someone offers you some misguided I Was A Cub Scout info, just say no.

I Want You To Know That There Is Always Hope is out on XL/Abeano on February 18 and will be reviewed on DiS next week. The band tours as follows: