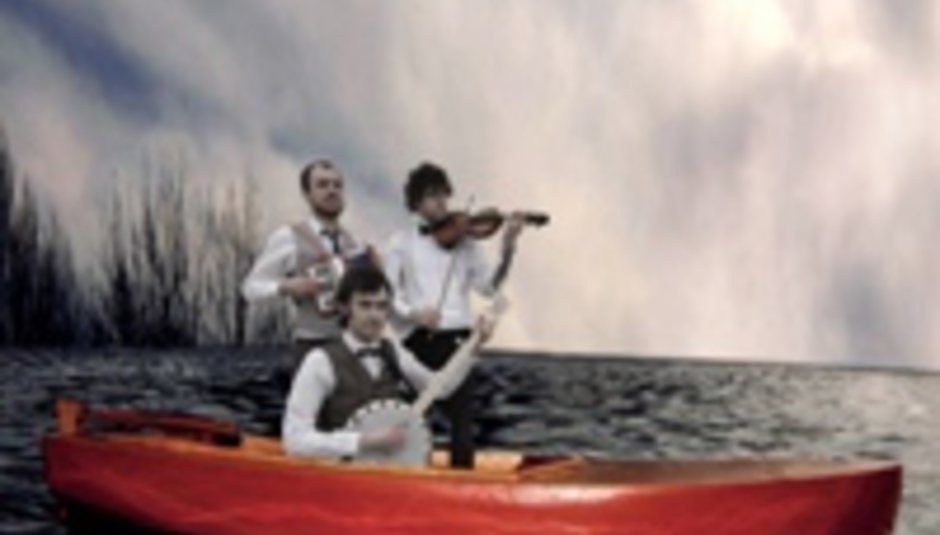 Hey you! You like Pop Music, don't you? Do you like it when it's slap-you-in-the-face abrupt, or do you like when it taps you on the shoulder and whispers, "Um, excuse me, look at this mondo-wicked chord progression I just stuck under a nifty pizzicato string accompaniment"? If you like the latter (and it's hard not to when it's that polite), you should really spend some time on East London's Left With Pictures. Slightly more erudite and well-informed than most, Left With Pictures are the closest imaginable band to truly embodying that overused 'ensemble' tag convincingly. Quietly, DiS(cover!) shared a Red Stripe at the dingy but trendily apparelled 1001 Bar to talk about triangles, the Classics and, obviously, some pop music and that.

It's a hackneyed question, but do you think you could tell me a little bit about how you got together?
Stuart Barter (vocals, instruments): We studied together in Nottingham, we played various forms of music together, then we moved to London for various reasons… It got together in Toby's (vocals, instruments) bedroom and we laid out our instruments.
Toby Knowles: Loft conversion…
SB: We play a variety of instruments, so we just laid them out and started. I think that’s fair.
TK: When we were in university we played in a covers band, we were a bit more rock 'n' roll. We enjoyed that. Then we all moved away, Rob was in Essex, we were up North.
Robert Wicks (instruments): We missed each other and wanted to play music again.
SB: There was no set plant, we just had lots of songs and just started arranging them.

What sort of bands did you used to play in?
SB: Well, this band in Nottingham was… I don't know how to describe it, really! The guitarist was into these wailing solos, the bass player was into a load of funk…

So you were like the Red Hot Chili Peppers, then?
SB: I wouldn't go that far, hopefully not anyway! Me and Toby were singing, same as in this band, and I think that rules out Red Hot Chili Peppers. And we're not muscled or tanned…
RW: We toured the Nottingham circuit extensively.
TB: We were very much before our time…

You were recently on a Pick Your Own compilation (compiled by The Mules) with Eugene McGuiness, Emmy The Great and all those lot, how do you see yourselves in relation to your peers? Do you bring anything different?
RW: The whole idea was The Mules picking bands that they really enjoyed themselves. Some of them are up and coming young performers around London. So I guess that's us.
SB: They're all quite different though, The Mules don't really sound like Emmy The Great… I suppose we're similar to someone like Noah And The Whale. The difference, I suppose, is in our approach to arrangement. I don't want to sound like I'm doing down any of these other bands, but we take a long time over the arrangements, it's quite a refined approach. We listen to a lot of classical music, I guess maybe that's the difference. We've got more harmonies. And we're better-looking. More pizzicato.

Do you think that this approach to songwriting limits your ability to rock out and be spontaneous?
TK: When we first started playing live, we never really knew how we were going to end our songs. They were quite tightly organised, but at the end they'd drift off into nothingness. I think we still do a bit of that. I said that I wouldn't mention jazz, but I do enjoy improvising.
SB: I think once the song's arranged, you're in that moment. You're just performing the song and experiencing it as it is. We're not stroking our beards while we're playing. We mean it when we play them.

Could you talk a little bit about your classical influences?
SB: I think it's mainly the time that's taken over arrangements, and the approach.
TK: It's something we're still working on. The thing that’s very attractive about classical music and quite a lot of folk music is the attention to dynamics, what song's about, and some of the more minor details. Particularly in pop music everything gets squashed out at one level, one volume and pretty much one emotion. I think if you see us live, there's much more detail.
SB: There's something I like about a three-piece as well, we're kind of like triangle.

What kind of triangle would you be? Isosceles?
SB: Maybe something slightly obtuse… We'll think about that one.

Okay then, the last thing we talk about today will be triangles. You've talked about your classical influences and the way pop music can be one-dimensional, but do you think an argument could be constructed to suggest that you are still a pop band?
TK: We've talked at some length about how far we should promote the idea that we're in to classical music. We don't want to alienate anyone from our music, we want them to get an emotional response from it.
SB: We want people whistling the tunes. Even though we view some classical composers as stuffy individuals, I think the most famous ones just wanted people to whistle their tunes.
TK: But as for your question, are we a pop band?
SB: That’s what the intention is. It always starts with a song, a few chords and a melody. At that stage it's either good or it's not. If the melody works you either feel it or you don't. So on that level it's total pop.

Are you happy to have people keep referring to you as 'classically trained' or always mentioning that influence?
SB: At the End Of The Road festival they did a little blurb about us which was really pretentious, like “Debussy seen through a prism of…”. It was absolute bollocks. I quite enjoyed that someone had thought so deeply about it! At the end it said something like, “the difference is, this picture cannot be framed”.

What kind of subjects do you write about? Who comes up with the lyrics?
TK: Stu writes most of them, Rob and I write a little bit. It's a collaborative thing. I tend to write about things that have happened to me in the past. We did find when we were doing our EP that pretty much all the songs on there were about childhood. I find it a lot easier to write as another character or about myself in the past. I like distance between myself and the material.
SB: I start with how I'm feeling, it's totally opposite to Toby. I'm not another character. Usually, then, I'm influenced a bit by Toby because I'll imagine that person as another character. We've done quite a lot of work with children [all three have worked in schools], and you do find yourself writing about childhood and how it echoes in adulthood. Imagining situations you've been in via childhood and school. Lots about school.

You're in the midst of recording your first album. How's that going?
TK: We've sort of been a bit distracted…
SB: There's quite a lot of recording going on at the moment.

I imagine the process is a lot longer for you?
SB: It does take a long time, that’s true. We're getting quicker at it, we used to take ages. Toby does the mixing and the production side of it really, and recently we've been knocking things off quicker. We've done about four or five songs, we're planning on doing maybe thirteen or fourteen and then whittle it down to ten. We're doing a lot of recording though, we're playing with Peggy Sue And The Pirates who are releasing an EP, and we're collaborating with them on it.

What one thing has made you proudest so far?
RW: I really enjoyed the performance we did at the End Of The Road festival.
SB: It was great. Really great. We brought about 40 CDs with us and we sold them in five minutes. Total frenzy.

I bet you regret not taking more.
SB: Yeah! It was such a great festival, great acts. You could tell by the way people were listening and the looks on their faces that they were interested. It as probably the best gig we've done. We're hungry for more of that.

Shall we do the triangle thing now?
SB: I think there'd be an obtuse angle.
TB: Yeah, one obtuse angle and the other two would be somewhat narrower. With Stu at the front, hogging!
SB: That's right, me in the middle and you two in the wings! It's a very shallow triangle, basically, with me at the apex.
RW: Then another triangle with single shaft of light… maybe a sharper apex.
SB: Are you getting a sense of the band dynamic here?!

After that, it's difficult not to be intrigued. Though they admirably laugh off that band dynamic, it's one that seems completely plausible. Frankly, they're the better for it. Some bands work supremely well as triangles with obtuse angles and a focal point at the apex. Left With Pictures, though relatively early on in their career, have legs enough for walking, swooning, harmonizing and lilting with the very best of their contemporaries.

Listen to Left With Pictures at their MySpace site, here. They play the following shows: