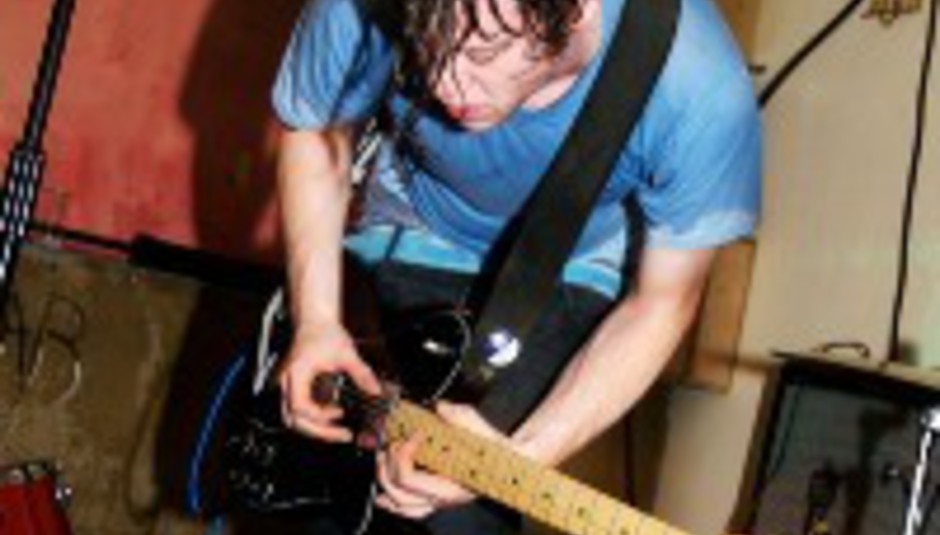 At the start of the year DiS asked one of our Early Doors picks for the coming year if they’d like to keep a diary of their exploits throughout 2008. The purpose: to see if they succeed or fail (obviously we’re hoping the former), and to get the inside on any touring gossip as and when it happens. Our willing victims contributors: Johnny Foreigner.

In a nutshell: ‘J-Fo’ are Alexei (guitar, vocals - pictured sweating at our DiScover Club), Kelly (bass, vocals) and Junior (drums, keys, vocals). They are from Birmingham. Their debut mini-album, Arcs Across The City, earned itself a 10/10 review on DiS late last year (review), leading to us selecting them as one of our breaking-through bands for the year here and DiScovering them properly here. The band headlined the first DiScover Club of the year last Saturday (January 26 – further dates here), packing the Notting Hill Arts Club out like few DiScovers before it.

Once a month, from this article through to December’s celebratory final entry, J-Fo’s Alexei will be keeping a record of events in the world of one of this country’s brightest new indie acts. Over to the gentleman himself… My name is Alexei. I play in this band, Johnny Foreigner, with my friends, Junior and Kelly. Last summer we signed a proper record deal. We made an EP at Southern Studios and it came out and got good reviews (one of which is here). We made some good friends, and then we went to America and made an album and came back and realized we could probably get used to this. So, things are going okay – we’re horribly poor but we’re getting by doing what we want, which makes us luckier than most.

It’s good that I’m starting this diary in January because I can miss out the drunken fancy dress mess of a gig we played for Tropical Hotdog, at their New Year party. My friend filmed it and I’m saving the tape for future career sabotage. Spent the first half of January in a stupor, sort of like being on the dole, only without the money. I did the following things:

South Park marathon (up to season seven)
Vector TDX (level 37 every fucking time)
Did some mixing by e-mail (Can you turn the second bit up a tad? No, two tads.)
Made the sleeve for our next single, a day late
Got my friend to re-shoot the photo for it, two days late
Asked our friendly genius artist, Lewes Herriot, do completely redo it, three days late

Then we started on tour. Our first proper, name on the drumkit and everything headline tour. I had a bit of a moment on the first morning: we got shirts delivered to my house. Real, actual printed t-shirts like what proper bands have. And then had to count and size them like I do in my real proper job, which killed it a bit.

Besides the obvious, holyshitwe’reinaband reasons, I love touring because a) I find sleeping on the floor panels of a moving transit van bizarrely relaxing, and b) my home is a leaky cold bailiff magnet I like to stay away from.

We played the Portland Arms in Cambridge and it was well special; by the end of soundcheck we’d blown a bass amp and cracked a cymbal. The actual show was pretty sweet, nothing else broke and we got an encore and sold some real t-shirts. We left feeling fuzzy.

Club NME, in Swansea, was like a battle. I think we won. The promoter praised my heckler dissing skills. We decided we want ‘Hobo Humping Slobo Babe’ as our intro tape forever.

The Hub, in Exeter, was awesome. It’s pretty rare to hear DJs playing songs we actually own. The Hub shun the traditional backstage cupboard in favour of a big room with couches and a telly and a practice amp and a separate shower room. I met loads of friends I hadn’t seen for years, and ended up on Exmouth beach at 8am watching the sun come up and mad people walking their dogs. Was a nice, luxury moment.

The barfly in Cardiff has the best dressing room graffiti ever. The date’s with Sam Isaac – we like him quite a bit. He refuses to call us anything but J-Fo and he plays these absolutely warming songs that leave us wanting to stop doing the band and get back with our exes. Well, maybe that’s just me.

We pick up our new van in York, ahead of playing The Fibbers. Our driver Lea has botched together a giant box on wheels with HEATING and a CD PLAYER and LIGHTS IN THE BACK. All our previous touring has consisted of me and Jun lying down amongst the amps freezing to death for silent hours. Now, we can fall asleep and read and listen to Meneguar, it’s like a car ride again. Though we’re still lying down… Anyway, such excitement led to us being super late, thus depriving everybody of a soundcheck, but the sound was awesome and no one seemed to mind too much. Fistful of Yen are a local York band who were dead good in a less-intense (but still topless) Blakfish way. They stole off our rider but since we stole their soundcheck it seemed fair. Sam turned up a minute before he was supposed to play, with a cello player, like you do. I knocked the mic off the stand four times – it’s a record. Lea, out driver/TM/roadie and all round Zen Master, now has a new hat to wear.

We stop in Bangor on the way to the Liverpool Barfly to pick up a bass amp. Bangor is in Wales. It’s not "on the way" from York to Liverpool. Thankfully, no one in Liverpool cares for timings or soundchecks. This is one of the reasons Liverpool is the best city. The sound was PERFECT, we got sweets and things in our dressing room (Sam got better sweets, though), and everyone was super dead boss friendly and I only fucked the mic up once. This microphone thing is really annoying me now.

I’m not sure what I do that other singers don’t that means the stands start to collapse or the mic falls out or gets unplugged. If anyone sees us and notices then please tell me. (At the time of writing) We’re going to London tonight for the Artrocker Festival thing. We’re playing with My Psychoanalyst whom we do love a bit. We’ve been hella lucky with the bands we’ve played with. I’m well looking forward to watching Kelly lug her amp in – it’s about twice the size of her. (Anyone at Saturday’s DiScover Club will have seen this – said amp is a beast – Ed.) Jokes… we will help, obviously.

Best in-house background CD – Liverpool (Q And Not U, and Pavement, and Voo)
Best rider – Cardiff (loaf of bread, block of cheese and a bag of apples)
Toilets with most functioning appliances – Exeter (shower!) Alexei will be back with more tales of Johnny Foreigner’s exploits next month; check them out online here and on tour with Los Campesinos! (*) in February:

Details of more dates, including a series of shows with The Young Knives, can be found on MySpace.