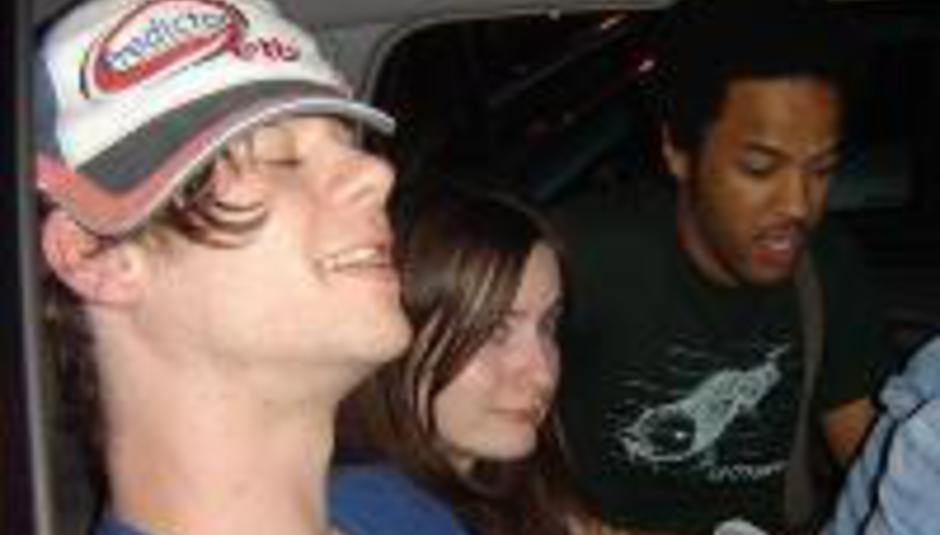 You may or may not have heard of Johnny Foreigner; hopefully if you’ve read our Early Doors picks for 2008 you’re already on them (clicky). Even if you’re yet to bend an ear their way, that's all set to change this year. Soon you, like us, will quite possibly love ‘em.

The Birmingham trio – Alexei, Junior and Kelly – have two sold-out 7”s to their name, have recorded for Radio 1 and shared stages with the likes of Idlewild and Los Campesinos!. Last year they signed to London-based Best Before Records ahead of their 10/10-garnering mini-album Arcs Across The City (review). Their debut album proper, recorded in New York with Machine, is out later this year.

DiS spoke to Alexei via e-mail regarding the album, the band’s future and... The Twang. Without further ado, meet the next your new favourite band.

First off then: influences?
Without re-writing the mega list on our MySpace, our influences are music, bands and songs and stories that give you goose bumps; the little things people don’t notice about themselves. And gin.

The reception to your songs seems to have been unanimously positive. Has there been a gradual awareness to your music over the last two years, or has everyone only started to take notice recently?
It seems to have snowballed drastically in the last few months. People have always been kind to us, but lately there’s been so many we’re starting to lose track. It’s incredibly flattering.

You recorded your debut album with Machine (Fall Out Boy, Lamb Of God). Why him? It seems like an odd choice for a British indie band.
We don’t really want to sound like a British indie band. Machine’s good at making things sound how they sound in our heads; he comes up with production ideas we wish we’d thought of first and he makes everything seem like the most fun job in the world – which it sort of is. And, hanging round in New York beats hanging round in Birmingham.

Will there be any noticeable stylistic changes from Arcs Across The City evident on the LP?
Yeah, it’s going to sound like Lamb of God! Nah, it will sound bigger and more RAHHHH and the feedback will be just right. Maybe the singing will be put up in the mix a bit too, and there’ll be some more “oooooooh”s and some chanting. They’ll be a violin, and a bit more Casio. Level up.

You seem to have quite a big sound for a three-piece. How much of this is studio wizardry and how much is faithful to your live sound?
We double track some parts, add a load of “ooooooh”s and delete all the talking rubbish. Aside from that it’s pretty much the same deal. This time we took a bit more advantage of having time to play around with overdubs, but there’s nothing you’d notice as missing when we play songs… apart from the song with the violin and glockenspiel and the song with the million “ooooooh”s.

Do you ever see yourself breaking into the mainstream? If the reaction from certain music blogs is any sign of things to come, then the future looks bright to say the least.
I don’t know. I’m not sure if that’s what we want, really. Obviously we want to sell enough records so that we don’t have to go back to the real world, but at the same time, if we get to the stage where we can’t actually go and hang out with people at our shows then we’ve sort of failed. Certainly, not many of the bands we listen to are mainstream artists. Idlewild before they went off is our target weight.

You chose to sign with Best Before Records earlier in the year – was there any particular reason for this? Was there much competition from other labels, an 'A&R scramble' of sorts?
A scramblette, perhaps. We were won over by Best Before because they were the most enthusiastic and into what we are trying to do. And they let us do cool things like have 3D pop-up sleeves for our mini-album and paid for us to hang around in New York, as well as buying us fun new pedals and decent meals.

How are you coping with the band/employment balance? I imagine you’re getting a lot more gig offers now, and it might be harder to play certain shows?
True that! Kelly quit her job before we came out to New York, and me and Junior are going to work but at drastically reduced hours. It’s easier than just before we signed because then we were paying for everything from our own pocket. Now we can ask for money for petrol and instruments and things, and just worry about covering the rent on the houses we’re leaving empty. It’s hard and we’re poor, but it’s wrong to complain when everything else is going so well for us.

The Twang: discuss.
The Twang are no better or worse than any other indie lad-band from the Midlands. We wish them no ill will whatsoever. They're happy doing their shit and we’re happy doing ours. But by having huge billboards around our city, they’ve made themselves an easy target for everything we hate about music in general – dickhead lad culture, vapid shitty lyrics, recycled Stone Roses shit. We pretty much exist in parallel Birminghams, there are no wars.

Do you have any grand plans for 2008? What would make Johnny Foreigner’s year?
Getting some gin on the rider, a new bass for Kelly, playing SXSW, and paying some bills. We’d like to visit Chicago, Japan, Canada. We’d also like to make some music videos, get asked to join Broken Social Scene and to play a gig where I don’t break the mic stand. Some of these are more likely than others.

Finally, would you care to recommend any other British bands worth listening to at the moment to our readers?
God yes! I'd recommend Sunset Cinema Club, Little Dipper, My Psychoanalyst, Dananananakroyd, Copy Haho, goFaster, Elle S`applle, Arms at Last, and Sky Larkin.

Johnny Foreigner’s Arcs Across The City mini-album is out now on Best Before Records, and the single 'Our Bipolar Friends' is out on March 5. Listen in at the band’s MySpace, here, and catch the band live at the following venues:

# with Sam Issac
* with Los Campesinos!