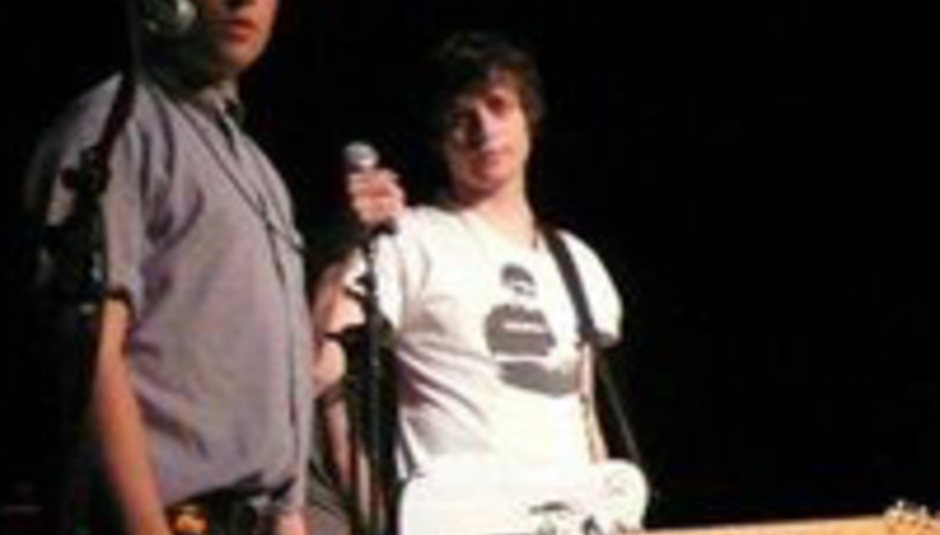 I find Orlando Weeks at the top of a staircase in the pub at the corner of Curtain Road. At the bottom of that staircase I had three drinks, 30 seconds later and it’s somewhere closer to one and a half. Good beer washes the wooden floorboards, I slide through clumsy, door buffeted open by an outstretched toe and then there’s Weeks and he’s fumbling with something, frowning like an incredulous Bueller.

“Know how this thing works?” he says, pointing the disposable – not SLR, not video, not digital – camera in my direction, then it’s “Ah s’alright, I think I got it,” before I get a decent look. 24 exposures, shots taken, all’s alright, it’s sorted. Still though. Even my granddad had the Kodak flash down pat before he passed years back.

Did you ever have a train set?
Orlando Weeks: Nah, I didn’t. I always wanted a Scaletrix but I weren’t allowed one.

No? How come?
OW: My parents were of the thinking that – we weren’t really allowed computer games or anything like that either... they were aware that we’d really enjoy it for about three days and then we’d break it and that’d be the end of it.

Far be it for me to take my humble train set, long confined to cardboard in the loft, as some forthright outpost on modern’s linear walk, but there is something undeniably awry and out of step about The Maccabees. Dear hearts questing for empathy in ironic times, irony being the language of not just most new indie but also the entire internet; god forbid drunken rants, poured 2am tickers re-surfacing to haunt new lives. Shouting from the rooftops (sobbing on the fire escape?) is bravery among a generation of scowling librarians.

For all that sincerity, perhaps it was the risk of regret that’s kept me from The Maccabees for so long. Missed: one appointment with Orlando, Hugo and Felix White, Rupert Jarvis and Robert Dylan Thomas back when the DiS podcast cavorted unchecked through major label catalogues and a first-wave of white earphones. Missed: an overnight on the band’s tour bus in October, though it’s fairly obvious five boys on the homebound, Cambridge-London lap of honour wouldn’t want some little tosser with a Dictaphone around recording every detail for posterity.

So it’s here, in the confines of a deserted Old Blue Last, that Weeks, Hugo White and myself converse on what that Dictaphone's flashing 'VCVA' might mean and finally swap words. The past keeps coming up; it probably pays to confront it. Let’s start at the beginning.

“We loved going to see The Libertines,” affirms Weeks, after a momentary pause. “For me it probably did have quite a big… part of why I wanted to be in a band.” The pondering’s read easily – my own memories of the time, my move to London have chimed with those of so many heroic survivors from the early, as-yet unbranded part of the decade that it’s no surprise to see hints of the old familiar in the coy rude’s eyes. Two parts bemusement, one part a rosy type of warmth, the other quarter somehow both familiar and lost.

“It sort of ate itself. It kind of all died a death. I remember it fondly; I remember just being really excited the whole time. Having something in common, immediately with people you’d never met. I don’t mind saying that, I’m not ashamed of it.”

“Thamesbeat – the only ridiculous thing with that was when people tried to give it a name,” begins Weeks, before White bites in: “Mystery Jets, Jamie T – some of the best bands in the land came from that, but it wasn’t that together, more just a bunch of people we met along the way.”

Despite “never being part of a scene, really”, as White asserts, that bunch of people's been a big one as the way the band have taken has been a proper long one. First surfacing with ‘X-Ray’ a touch over two years ago, the quintet found themselves playing similar live shows for the duration, as they swapped from label to label and eked their way into as many black lists as they did imaginations. Success – especially when made relative to the likes of The Others, The Paddingtons, Special Needs et al. – shows that patience has been a virtue, but now feet are itching beneath the straps of their high-tops.

“We’ve been waiting to write new songs for a while now, even while we were recording [Colour It In],” admits White. Any brain-juddering changes in direction we should pad-up for?

“It’s gonna be different y’know,” says Weeks. “It’s gonna be a lot more like ‘First Love’ and ‘Mary’ as opposed to ‘Latchmere’ and ‘About Your Dress’. We’ve done what we can with those immediate poppy songs. I think it’ll still be The Maccabees, but we’re not gonna be some super-experimental…”

Not some drifting, noise-drone…
OW: Yeah yeah, not some, like, whale sounds.

His last, his dying words. Open the record with them.
OW: Ha ha…
HW: Na, we have done so much since that record.

White picks the fraying thread back up:

“When we started the band none of us were, like, musically competent or whatever, that whole process of doing that record was like a learning curve. I think we’re past that now. I hope on this record we’re a little bit less teenage and a bit more serious.”

See – ‘teenage’. All their remembered-fondlies are only half a decade old. That’s early for sepia. Caught in this rapid turnover of nostalgia they are, however many years they’ve now spent on the planet, essentially that, ‘teenage’, and this is why I think they seem to attract a disproportionate amount of stick. Yeah, the tangled chronology which sees re-releases but more than that – as very neat and decent as the tracks on debut album Colour It In are, it already sounds like The Maccabees have outgrown their own songs like the newest group of old friends. For this they sound awkward, out of place, too mature for their learning songs but too immature to be taken seriously by indie-rock high-minds.

In lieu, perhaps, of this the pair have made up their minds what the last tour, and the shows at the Roundhouse in London in particular, stood for. Weeks:

“That’s what the tour was, saying goodbye.”

“We couldn’t go off and play those songs again,” White concurs. “It’d kill us. We’re way ahead of what we’re playing at these shows and although we haven’t done it yet, that’s what we have to do now, catch up with the stage we should be at.”

Those shows featured an appearance from an accordion. I’d say it was a ‘surprise’ appearance, but that much is a given; I can’t think of a single situation where the introduction of an accordion wouldn’t be a surprise. Familiar yet odd, a relic from olde Britannia, the instrument seems to sum up the racing green, end of the garden shed with Cresta thing The Maccabees bust. Aware again of the presence of the past, I ask Weeks how long he’s been playing his squeezebox.

That’s quite a disappointment in a way. I had this uncle who was like this Irish alcoholic. The one thing that impressed me about him is that he taught himself how to play the accordion.
OW: Did he have a proper…

I feel a bit crushed.
OW: Literally I’ve had it for maybe six weeks, but I’ve not had it for long. I bought it in a kid’s music shop in America. Couldn’t probably play it with anything else… though I have almost worked out ‘Love Will Tear Us Apart’. It sounds shit… but it will sound great one day. I’ll have to do an acoustic thing.

That’s another thing rare about The Maccabees. They’ve got pluck. It seems the urge to differ ever so slightly runs in the genes – Weeks relates the tale behind ‘Good Old Bill’, the opening track on Colour It In:

“My granddad used to spend his whole life after he retired repairing a traction engine. Some old boys go and take up golf or whatever. He just spent his life lovingly repairing this engine.

“Five years or so before he died he handed it over to this steam museum, this locomotives museum, because he was just too old.

“It worked round in this museum every day, just a working exhibit. And then the day he died was the first time they ever called up my gran to say that the engine had stopped working and would my granddad, Bill, come and fix it. It just struck me as a strange coincidence.”

Did you ever have a train set...

On my return to the office I realise what 'VCVA' means. Kursed by Kodak. A luddite and a twat, I make the apologies and arrange another call to tie loose ends. So, looking forward to a year that should see the release of their second full-length - “we don’t want to wait two years again. I’d like to have it out before the festivals come around again” - and back on one that’s seen them kill American deer, (DiS: You can do that in Richmond Park. OW: “Not like this you can’t. We hit it at 80mph and the whole van was covered in blood. We just managed to avoid the edge of a cliff.”) and support Interpol, (“They like to be mysterious”), does Orlando have any regrets?

“Nah, nothing I can think of. I, I er…I’m gonna go with no. Nah. There are probably things I could’ve done better or could have changed. But I wouldn’t say I regret anything mate. I’m surprised that I think that but I’ll go with it.”

And I’ll go on with The Maccabees, fellow survivors of that Doherty thing, true keepers of a realer, constantly revised version of Albion. Theirs is not a vicarious nostalgia, bluster to cover the cracks in stories about someone else’s past. Basely put, all their sentiment is sentient and even if it’s emerging from the small ravines between indie 2007’s cracked mirror, you need to admit to being a victim before you can brag of being the victor.

Colour It In is out now on Fiction/Polydor, and ranked at number 16 in our editorial albums of 2007 list. To see where it ranks in our readers poll, click back to DiS tomorrow. Yes, all will be revealed. Their MySpace, here.