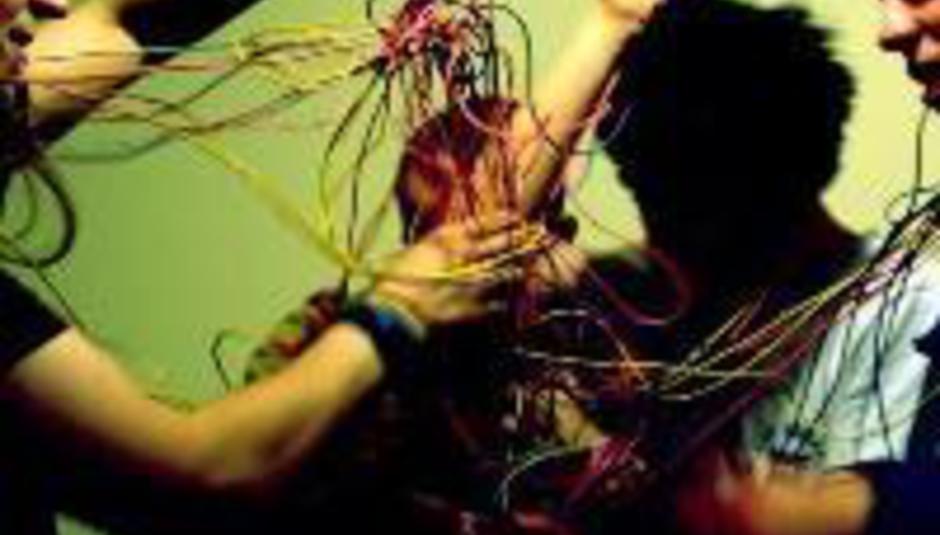 Leicester’s Tired Irie are set to open next Saturday’s free-entry DiScover Christmas Party at London’s Notting Hill Arts Club (that’s December 15, diary-keepers), so what better way to open a few early-door interests ahead of the date than by featuring a neat DiScover feature? Fortunately, then, this week’s is titled DiScover: Tired Irie.

Forming two years ago, Tired Irie are Ian, Simon, Bobb and Mark; since their inception they’ve released a sold-out seven-inch on Oxford label Try Harder (Foals, Jonquil, Blanket) and have recently seen a self-titled four-track EP receive no small smattering of plaudits (DiS review here). Last seen by this writer in London supporting 65daysofstatic – alongside DiS’s own Youthmovies – Tired Irie’s burgeoning live following looks set to propel them into a position of enviable acclaim and commercial appeal come their debut album… whenever that emerges.

Hello Tired Irie! Please run us through how you came to be the band you are, and when this was. Were members in bands previously, and if so were there stylistic similarities? How has Tired Irie developed, do you think, since the band's inception?

Tired Irie began as a five piece in 2005. Simon and I have known each other since primary school and have been playing music together since the age of 13.

We met Neil - our previous guitarist - during GCSEs, and Bobb and Mark at college. Our initial material was a fair amount heavier but still contained dual vocals and intertwining guitars. This theme has become more developed and the songs are more direct now. The rhythmical aspect is definitely of higher importance in our new material.

Coming from the Try Harder stable, there's a lot of competition in the quality stakes from your own labelmates: is there any healthy competition between bands on/associated with the label? Does the Youthmovies - and from there 65days/Foals - connection aid the smaller-profile acts on the label, do you think?

It's a very eclectic mix of bands so competition doesn't come into it. We appreciate having friends in a slightly elevated position that can give you advice, and the support slots come in quite handy. Playing the Electric ballroom with 65days and Youthmovies was an absolute pleasure.

You just recently released a self-titled EP: pleased with its reception? Do your releases so far paint a nice picture of the band's progress? Is there material that you wrote and played in the past that you're quite happy to forget these days?

Well, we were really pleased with the finished EP so any kind words just went towards building our confidence within the band. Personally I got far more pleasure seeing my little sister dance to ‘IM Keller’ than anything the NME said about us. I wouldn't want to forget about any of our previous material: it helped us to get to the point we're at now.

Vocals seem especially key to Tired Irie, by which I mean the layering of them, the use of voices as almost a 'proper' instrument. A fair thing to say? Is this because you all like a sing-song? Does the approach lead to any regular comparisons?

Vocals are extremely important in our songwriting. The patterns and harmonies are generally what come naturally; working out what to extract or add to a song takes infinitely longer. I've read a few Duran Duran comparisons lately, which may have been spoken in a derogatory fashion, but we take them as complimentary. And yes, we very much enjoy a good ol' sing-song. Mark shocked us all recently with a blinding a cappella rendition of 'Time of my Life' from Dirty Dancing.

On topic: one comparison I have noted is Foals - simply a case of coming from similar influential backgrounds? Ever get accused of - oh, I dunno - hopping atop coattails? If so, how do/would you deal with such criticism?

As noted in a previous question, our music has become a lot more direct and rhythmical. Two main factors influenced this change in dynamic. The first one being Mark’s switch from bass to guitar: his style of playing is very technical and there is an obvious Q And Not U/Battles influence in there. This, I guess, is a common ground we share with Foals. The other change in our sound being Simon taking up synth bass. Our first song as a four piece, 'For Those Who Swung Hips', is a good example of why we went this way. In the first half the song meanders in an aimless post-rock fashion but as it breaks down Simon locks into the drums and it becomes much clearer and precise. This theme was developed into the tracks from our EP. It was a very natural process.

Can you hear your music as 'commercial'? Given the current success of alt-rock acts with dance beats and clever polyrhythms - some band from New York or something - do you think Tired Irie could have a fighting chance of 'making it' in 2008?

We don't consider our music as 'commercial', and as for dance beats our next single doesn't have any! If, in 2008, a vast amount of people get into our band and start coming to shows then we have no problem with that whatsoever.

What is in store for the band in 2008? Will the year see an album release, and if so how's that process coming alone?

We're currently recording our new single (plus two b-sides) which will be finished in the next week or so. I wouldn't want to jinx anything by giving a proposed release date. It will be followed by a considerable amount of touring as that’s what we enjoy most. An album seems a long way off at the moment as we're just enjoying writing, playing and developing as musicians.

Are you struggling to balance band time and work time, or are you fortunate enough to have flexible, understanding bosses?

I'm glad you brought up the work thing as, anyone else who plays in a band will tell you, it’s a HUGE problem. Some of us work from 6am, travel to a gig, get home at 3am and start again. And personally, my boss isn't understanding. He's a cock.

Tired Irie’s self-titled EP is out now on Try Harder, and their MySpace can be found here. Forthcoming live dates: