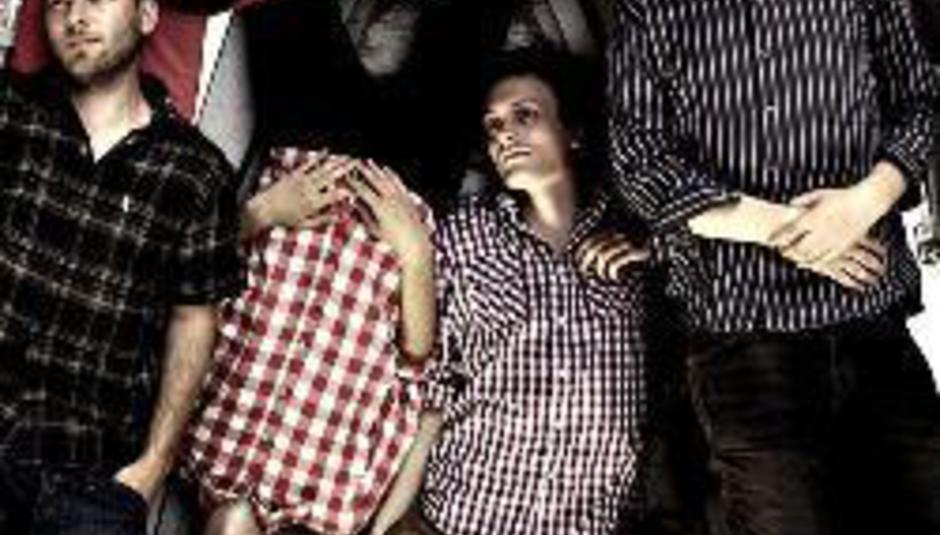 Not only acclaimed on these pages – as a cursory exploration of the internet’s more reputable review sites will indicate – Danish five-piece Efterklang are enjoying their highest level of international attention since the release of their debut album, Tripper, in 2004. While not every critic out there sides with this one in rating their second, the eerily alien yet serene and comfortingly enveloping electro-indie long-player of Parades, as something of a masterpiece, it is nevertheless the recipient of some truly favourable assessments. If you're short a few ball park references: Björk, Radiohead, Sigur Rós.

Released earlier this year, Parades is one of 50 albums making the shortlist for this year’s DiS readers vote – you can select your favourite albums from said selection here. Its acclaim, and that directed the way of preceding EP Under Giant Trees, serves as something of a springboard for the band’s DiS-sponsored UK tour, which kicks off in Bristol on Wednesday (November 21). Ahead of their domestic dates, we caught up with bassist and guitarist Rasmus Stolberg – who also runs the band’s own Rumraket label, home at various points to acts such as Taxi Taxi, amiina and Grizzly Bear – to discuss Parades’ reception and the band’s plans present and future.

Firstly, it must feel good to be coming to the UK on the back of such positive press for both Parades and Under Giant Trees.
It definitely helps us relax a little. When you travel to a foreign country or a new city you are always a bit worried if anybody will show up to the shows.

Does this acclaim heap any pressure atop the band to deliver a series of stunning shows, or does it relax you – you know, maybe, that an audience is there and willing to follow your every nuance live, like they have with the recordings?
All this positive press lets us know that at least there is a good basis for getting some good crowds. In general we don’t feel any specific pressure to deliver stunning shows, but it is our motivation to do so - each night of course!

Simply categorising the band must be difficult for promoters. When you started the band in 2001, did you have set ideas about how the band was to sound – otherworldly, eerily alien yet warm and comforting – or did the band’s material grow from more traditional roots?
When we started out in 2001 we had no idea whatsoever about how we wanted Efterklang to sound. The only guidance we had was the ambition to create something new and something we could call our own. This took a lot of time. Our first personal breakthrough was when we finished the recordings for Springer (the band’s debut EP) in April 2003. Listening to those recordings we sort of all got in synch about where we were going.

How did you pitch yourself as a band initially, and if pressed to summarise the band’s sound in a sentence, what would you offer?
Efterklang in one sentence is very tough! Maybe Efterklang can be described as an intuitive playground for lost souls and rhythms, melodies musicians and songs full of good spirit. One of our main drives is to make new music - something that has not been heard before or put together like that before, but it is also simply to make something beautiful and moving to be enjoyed by more people than ourselves and music specialists. Maybe in short our music is experimental and strange, but also beautiful and accessible.

Was there any negative feedback about Parades at all? It seemed to me that many a critic was impressed by it, acknowledging that it marked a substantial progression from Tripper. Is this pleasing for you, to have critics, and simply individuals from outside the band’s innermost circle of associates, highlight the progression made by Efterklang? Is it something of paramount importance to you – to progress, to evolve? Do you fear creative stagnation, and what drives you to overcome it?
Progression is very important for us - but I think our take on it might be different than, for example, bands like U2 with a horde of records behind them. All of us in Efterklang still feel we haven’t reached our target and full capability yet. When we finish the next record maybe we will get closer and, if the day should occur, although I doubt it will… When we all agree that this is what we have been trying to make for the last ten years then I think we might sit down and discuss how we can renew ourselves again. If we should hire Brian Eno, Flood or Daniel Lanois, you know. That said, all of us are very happy about the outcome of Parades - it is the first recording we have finished where all of us have left the process being totally happy about the result.

Clearly visual aspects are of significant importance to the group, from the album packaging through to promo videos and live projections. Again, was this approach to aesthetics – to ensure that such presentation was as meticulously planned and executed as the music itself – there from the very outset?
I think in general we are aesthetes and care a bit too much about the smallest of details. This is also why we care a lot about artwork - we have always felt that it was extremely important. When we work so many hours, months and years on an album then it is key to us that the artwork matches the time, energy and feel of the music. For our last three records – the One-Sided LP, Under Giant Trees and Parades – we have worked with Nan Na Hvass from Hvass&Hannibal (link), and in many ways her art matches Efterklang perfectly. She is extremely thorough and careful about the smallest detail, but also playful and her imagination is beyond ours for sure.

An overseas label, Leaf, handles your releases outside of Denmark – was there ever trepidation about allowing these parties the power to promote your music their way, rather than being wholly hands-on yourself? It must be hard, at least at first, relinquishing all aspects of control over a release, especially one as important as Parades?
Due to running our own little label, Rumraket, we know a lot about releasing records - but we also know very little compared to The Leaf Label for example. We are glad to be working with them and they keep us in the loop on most things and also leave many decisions and projects in our hands. For example, we produce our own artwork, recordings, videos, tours and so on.

This UK tour, I guess, will see you through ‘til the end of the working year – I assume you plan to take a break over Christmas and the New Year, but what then? More touring for 2008? Do you already have plans for future releases coming together?
We already have extensive touring plans for 2008 - we will start in late January again and continue until summer including as many festivals we can get on and if the interest is there then we will tour after summer again. Right now we haven’t made plans about a new record. We have a few smaller film music projects coming up and then we will start thinking about new records once the touring is less massive.

What sort of time does an album take to gestate and be recorded – do songs come quite quickly and naturally or is the process as multi-faceted as the songs are layered?
To record an Efterklang album the way we did Parades takes about two years from when the first idea occur. But I think there is a new ambition in Efterklang to try and make some of the process different and maybe more simple as well. The process of writing a new song is exactly as multi-faceted as the songs are layered, yes!

‘Efterklang’, the name: does it really mean two quite different things in Danish, remembrance and reverberation? If so, it seems quite the perfect name for the band, which leads me to: what came first, the music or the name?
Yes it does - I think the musical term came first and then this word got adapted to mean remembrance as well. The same thing happened for us - the music came first and then we struggled to find the right name for a long time.

Efterklang’s Parades is out now on Leaf, and songs and more information can be found at the band’s MySpace page, here. DiS-sponsored tour dates as follows: