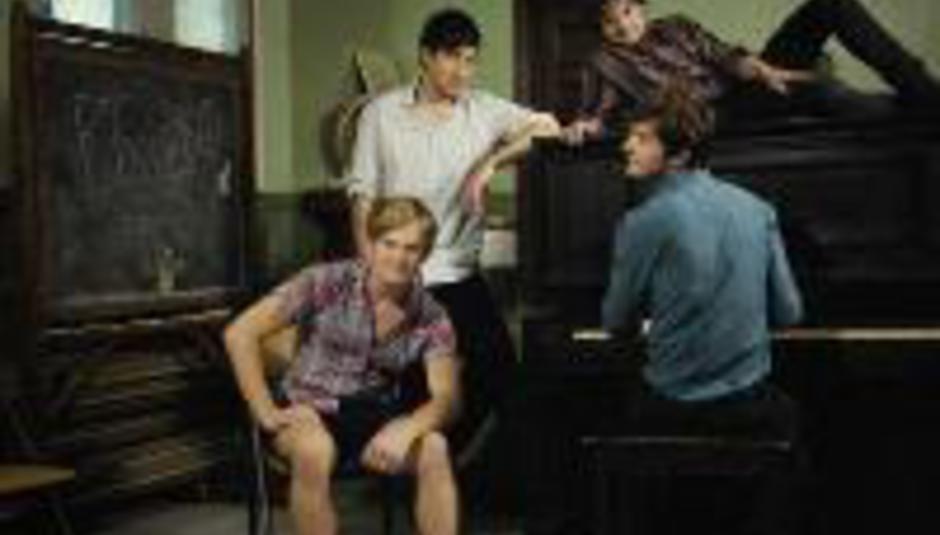 Grizzly Bear’s Ed Droste is taking a little time off; a period of reflection on the past couple of years, during which time the band’s profile has soared thanks to spectacular critical reception for their Yellow House album, the follow-up to Droste’s Grizzly Bear-as-solo-project effort, Horn Of Plenty.

Released in September of last year, Yellow House attracted plaudits from the worlds of blogs and broadsheets alike, with Pitchfork placing it in their top ten albums of the year and The New York Times praising its idiosyncrasies. Vaguely folk of form, the album’s slow-burn appeal has seen fans emerge cautiously, unwilling initially to dive right in but, ultimately, unable to resist the album’s myriad charms.

DiS catches up with Droste on the phone to see how the year’s treated him, how he’s found the reaction to Yellow House since its release, and what’s in store for the Brooklyn-based four-piece in the immediate future.

You’re at home now after some pretty extensive touring, right? This is where the break begins?
After an in-store here we’re taking a break, yeah.

What, like five or six weeks or so, enough to get you over Christmas and the New Year?
I’m thinking more along the lines of eight or nine months, although that time will include recording. But it’ll be a break from touring, unless we go to Australia and New Zealand, which is a possibility. They’ve been trying to get us to go for a while, and we’ve been thinking: “Will it be a really tiring tour?” “Will it be really fun?” We haven’t been down there yet, so it’d be a new experience for us.

Yellow House’s critical reception must’ve come as something as a pleasant surprise, given it’s your first proper ‘band’ album.
It was very surprising and wonderful, and great. We’re all happy with the steady progression of it – I think most people don’t hear it as an immediate album. I mean, I hear it as poppy, but I have heard from a lot of people at shows that they didn’t care for it that much, at first, but when they came back to it four months later they were suddenly obsessed. Even interviewers can be like that – someone interviewed me for the first album, who said he didn’t get that at first.

Horn Of Plenty, your debut, was pretty much a solo record though. I don’t suppose it compares in your head to the realisation of Yellow House?
I mean, I am not as proud of Horn Of Plenty – it is what it is. It’s me learning how to write and record. I think I was really insecure with singing back then, too. The vocals on that album are cloaked under static, as the whole prospect of playing live, and even being in a band, wasn’t in my head when I was making Horn of Plenty. It was made for myself, and I thought I’d share it with some friends but I was even uncomfortable doing that. I look back at that as some weird growing-pains album – it’s so personal, intensely so, and confessional.

But the second album’s seen your profile grow pretty nicely, albeit steadily so…
Here in the US, and in Canada, it’s been growing – it’s slower where you are. Yellow House hasn’t been received as strongly in the UK as it has even in France, and Ireland and Scandinavia. But, I’m just excited about where we get to tour. It’s not like we’re playing 3,000-person spaces, but just to be able to play in 500-person venues… the opportunity alone is awesome. We played the Scala last time in London, but London is like New York – it’s like its own little island. We’ll play to a full house there, but then go elsewhere in the UK, like Leicester, and play to 45 people or something like that. That’s pretty hilarious.

And you stopped off in Reykjavik on your last European tour for the Iceland Airwaves festival – how was that?
Iceland was awesome – I had such a great time at that show, and they gave us a really great slot. I had just been there this summer, on vacation, for two weeks – just driving around, absorbing the nature. So it was cool to go back.

Is there enough to do there to fill two weeks’ worth of holiday? I picture it as being quite desolate, full of barren wilderness…
Oh man, the barren wilderness is so insanely beautiful. There are huge ice fields and volcanic activity, all this steam and geysers and waterfalls, and little villages… it’s the most varied landscape I have ever seen in my life.

I suppose it’s the newest, or one of the newest, land masses on Earth. Must have a certain appeal…
I remember in the 1960s – well, I was reading an old National Geographic from the ‘60s. They were saying about this little island that formed off Iceland in the ‘60s. Someone gave me all these National Geographics, and this article just happened to be in one of them. This island off the coast…

I guess there’re no people there yet. Probably a little risky.
I guess there are just a lot of birds there. Puffins and the like. (Said island is Surtsey - Geography Ed.)

Let’s talk about the Friend EP – how did you arrive at this odd combination of cover versions by other acts and your own material?
I had been talking with the people in CSS, and we were talking about doing a split where they cover one of my songs and we cover one of theirs. I’ve not finished my cover yet!

I guess it’s a stopgap, right? Something to fill the void between albums, and keep the name out there?
So this is a total stopgap, for sure, but it’s useful for Warp to have something to release during the time we are working on a new record. We wanted to make it as full as possible, to make it value for money – there’s no flow to it, but that’s why we put it together as an EP. We went into the studio to record the new versions of a few songs as the live versions of these songs have changed so much; as we’ve never released a live CD, this is a bit of a response to that. We thought we’d just record live versions, but then I thought: Let’s just put on the CSS cover, and this Japanese b-side. Basically, we wanted to put on as much as we could regardless if it wasn’t cohesive in nature. I think it’s exciting to have eleven songs on such a release.

It definitely makes for a great value release, and I suppose it serves as something of a closing chapter to this period of your career, what with the Horn Of Plenty songs on it reworked and the bonus material from the Yellow House era. It’s like a wiping of the slate…
I definitely think so. I hadn’t thought about it that way, but now that you say it I’d say that’s true. I think we’re ready to move forward – we don’t know how we’re going to move forward, although we have some new songs, but each of our records come about so differently. I really don’t know how the next one will happen: I’m so physically exhausted from being on the road that the whole idea of diving into writing and recording is not appealing… it’s not a good space I want to be in, basically. We’re hoping to have another album out by the end of next year, and right now everyone is working on stuff alone.

That must be important to a band like yours, where you spend so much time under each others’ feet on tour, to have this time apart.
I think everyone needs their space right now, to get away from feeling that they’re part of a band for a little while. It’s almost like being married, and now everyone needs to feel solitary and single again, to get their writing juices flowing. We’re not a band that can sit down in a rehearsal space and just jam, or whatever. Everyone really needs their own space, and creates sketches of their own which come to life when brought to the table for collaboration. Even to get those bare-bones parts, though, we all need our own time away from each other, and from being in a band.

I get the impression that comes easily to you, as you started Grizzly Bear as a solo project, but I see too that Daniel is quite the contributor.
I’m really pleased that everyone in the band is so creative, because I know bands where there’s just one key songwriter who kind of dictates to everyone. Daniel and I generally sketch out the majority of the songs, although lately Daniel’s been doing more than me, but Chris and Chris do loads too. They also get involved with writing the songs, and I feel really grateful for that because before I didn’t have these guys to work with, and without them, well, I don’t know what I’d come up with. I’d probably do Horn Of Plenty part two, or something of that nature.

I’d assume, given the full-band nature of Grizzly Bear now, that any progression from album two to three won’t be as pronounced as it was between albums one and two?
It’s likely the jump between Horn Of Plenty and Yellow House won’t happen between Yellow House and the new one, because that was going from solo to four people. The sound of a full band will remain for album three, but it definitely won’t be Yellow House part two. I don’t even know where we are going to record it yet, and that’s something really important. The first four songs on the EP were recorded in a church this August, and there’s this very different feel to them compared to anything on Yellow House. It’s a little more ‘live’ sounding.

The new versions of ‘Alligator’ and ‘Shift’ are certainly very different from their Horn Of Plenty originals – they’re fuller, warmer somehow. Before you go, I’d just like to mention the video for the ‘Knife’ single (see video above) – it’s probably the weirdest promo short I’ve seen all year.
Well, it wasn’t our idea – it’s this creative duo, this director duo, Encyclopedia Pictura (link), who are actually doing Björk’s video right now, for ‘Wanderlust’. I just saw them a few weeks ago, and I think that’s what they’re doing. But they showed us some of their clips, and we picked that one. We had to hump all these pieces of wood, but it was tame compared to some of the other things they were suggesting. There was one where I’d need to have this body cast made of me, and there were all these water nymphs, and it was so overtly sexual and crazy. But they’re visually amazing, what they do. I remember when we first met, and I was like, “Wow, this is so incredible”. And they were hoping that one day they’d be able to work with someone like Björk, and now they are. They’ve been working with Björk for, like, five months, and with a budget way bigger than ours, so it’s gonna be epic.

Grizzly Bear’s Friend EP is out now on Warp; for more information, tour dates and to hear songs, click through to the band’s MySpace page, here.