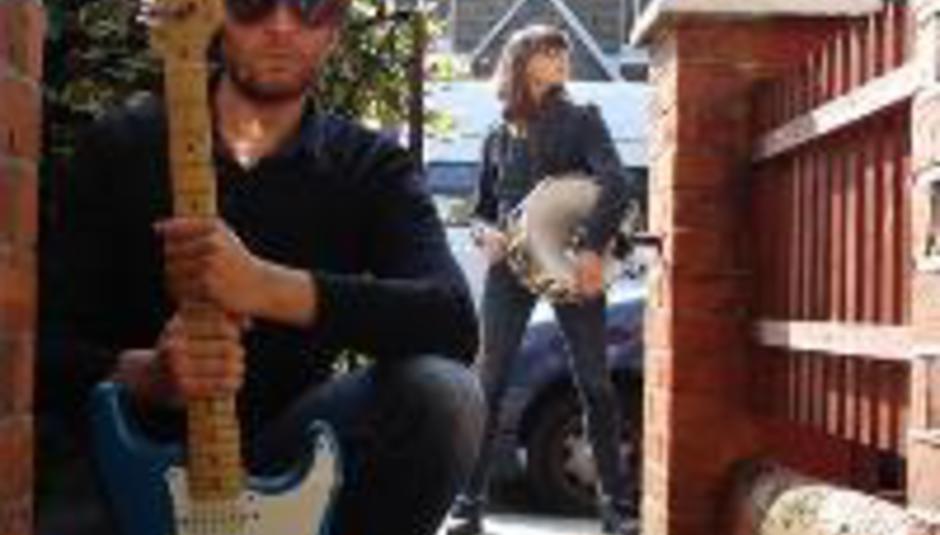 How to describe London-based duo Joe Gideon & The Shark without you being in the same room as me… it’s tough, for sure. Without waving hands and pulling shapes it’s tough to convey what this music can – and usually does – do to a body exposed to it; it’s rough, ragged, blues in its veins. It’s dark, atmospheric, oddball and surreal; it’s on your doorstep and in your airspace, alien yet talking the same language about the same ol’ trials and tribulations of a life lived. Uppers and downers: expected and accepted.

Formerly members of Bikini Atoll (check them out here), Joe Gideon and Viva, a.k.a. ‘The Shark’ of this partnership, have been taking to capital city stages with increasing frequency throughout 2007; the closest comparitive acts we can think of are probably Lift To Experience and Joeyfat. At the same time. When DiS caught them with Devastations earlier this year we needed them for our DiScover Club. And we got them, too: you can catch the pair live this Saturday, November 10, at the Notting Hill Arts Club in London. Click here for the necessary details.

Firstly, run us through some basics: who is Joe and who is the Shark, and what is their relationship? How’d you two begin making the music you do, and has it mutated any since the outset?

'Joe Gideon & The Shark' is Gideon and Viva, brother and sister. Our first show was just over a year ago in Birmingham, UK, 26th September, but we've been making music for life. Of note, we used to play in a band called Bikini Atoll: Gideon wrote the songs, Viva was the piano player. A couple of years ago, Viva wrote a break-up album and learnt the drums. Our music has mutated a lot since the outset. (At some point before music, Viva was an Olympic gymnast for Great Britain, and Gideon lived in Bolivia and was a judge in a Pan-American beauty contest.)

I guess, from what I saw at the Water Rats (Devastations and Josh T Pearson show, review here), you’re often categorised as being blues-influenced, yet there are narratives in the songs that recall the odd lyrical content of Joeyfat. Where do you draw influences from, exactly, and are they primarily musical influences? Is there a wider world to Joe Gideon & the Shark, and these songs are just one window in on it?

All these songs are, at heart, true-life stories, or imaginings / theories upon the nature of Man. There's definitely a blues-influence in our music, and recently we were described as noir-ish alt. country / art-pop. We agree with all of that, but the lyrics are pure Country & Western. We love stories.

Speaking of said show, that’s some fine company you’re keeping. Do you have favourite artists and acts to play with, and have you been lucky, generally, with bills? I can imagine it’s tough to piece together a bill that features acts particularly similar to yourselves.

Video: ’Anything You Love That Much, You Will See Again’

Releases: what, if anything, is available as yet? Are there releases in the pipeline? The MySpace material has been on rotation at DiS – what’s feedback like, generally, for your recorded efforts to date? And for live shows for that matter – positive? I was certainly impressed.

We've been selling our 'home recordings' at shows. The Rough Trade record shop in Talbot Road, London is going to stock a limited release of them on one CD in the next couple of weeks, in time for Christmas. Next step is to record an album with Head, which we're organising for March next year. The feedback for the shows and the songs has been magic.

How’s the balance between work – proper daytime employment – and play – the band – working out for you right now? Do you get enough time to spend on writing / rehearsing / playing? Does this affect your ability to play certain shows, where travelling or stop-overs are required? Are you generally proactive with gigs or do promoters come to you?

Viva works as a maitre de in the evenings. Nobody really knows what Gideon does, not even himself, so daytime rehearsing is not a problem. The restaurant's pretty cool when the shows come up... You have to seek gigs when you're unsigned, but sometimes you get invited to play. Live shows can be precarious. You might think it's going to be a venue, but it turns out to be a shed. Strangely, these gigs tend to be the best. It also helps to have an awesome booking agent.

How can the band progress now? Is it a case of getting something commercially available out, or is more live activity the priority? Do you see you doing more and more in 2008 – any plans pencilled in so far?

As I said we're planning to record early next year, and there are rumours that a label might even fund the recording and release it. As for more and more in 2008? We're both obsessive when it comes to music and the band, so we always want more.