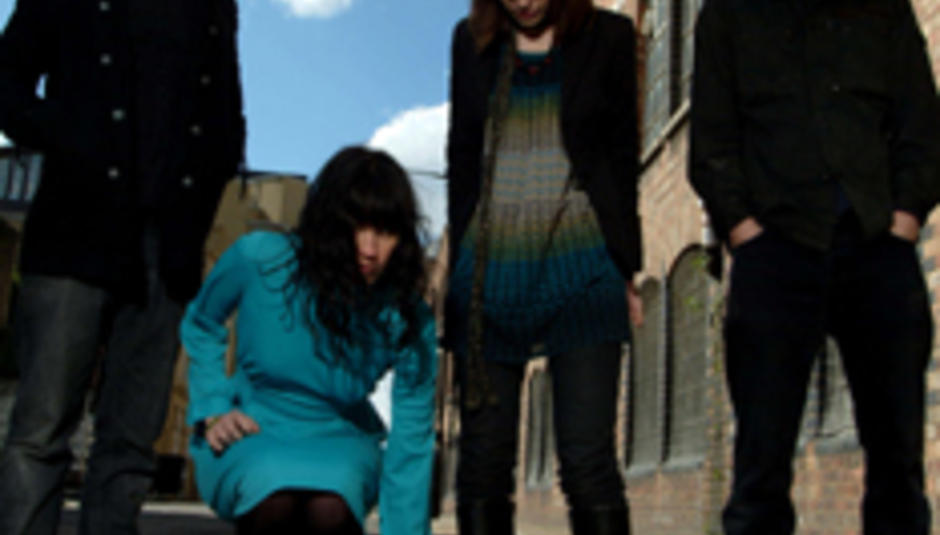 If you live across that rather sizable Atlantic-shaped pond in the USA, Scanners may not be such a ‘new’ name to you. After all, the band – all of whom are born and bred in the UK – are signed to one of your best US independent labels, Dim Mak (stateside home to Bloc Party, Klaxons and The Rakes), they have played on your Carson Daly TV show, and have appeared at such legendary venues as West Hollywood’s The Troubadour.

However, over here in Britain just one 7” has been released to date – ‘Lowlife’ (review) – and that was last year. Soon, however, you’ll be hearing a lot more of Scanners. For example, Channel 4 are already hawking new single ‘Raw’ round domestic living rooms in an attempt to increase the appeal of yet another piece of sub-standard teen programming. The single is out this week.

The band describes their songs as melodic with bittersweet lyrics and fill a void between the mainstream grandiose pop of The Killers and the raw credibility of Sonic Youth. DiS’s Tom Milway (replete with dodgy tape recorder) met up with Sarah (vocals/bass), Mat (guitar/backing vocals), Amina (guitar/synths/backing vocals) and Tom (drums) – a good-looking bunch! – in Camden’s BarTok to discuss how it all went down.

How, when, where did you all get together?
Sarah: Three years ago.
Mat: Is it three years?
Tom: Yeah, feels like longer dunnit!
(All laugh)
Sarah: All by coincidence. A week later we were gigging.

So, no ad’s or anything?
Sarah: Well, not Amina; she came onboard though a friend and had come to a couple of gigs. Tom was at college...
Tom: Yeah, I was studying at DrumTech and got a call saying there was this band Scanners, check it out. Went over to Scar (where we still rehearse to this day) and it was alright.
Mat: Friendly faces.
Tom: Lumberjack shirt, holes in the elbow. Still got it, bless him.
Mat: Tribute to Seattle, that!
Tom: And I think there were about 400 drummers that auditioned for it.

You bastards! Nearly had me there…
Tom: It was me and this other guy.
Sarah: I hate auditions. It’s pretty horrible when you are auditioning but being the auditioner is the worst.
Tom: Nick was the worst though; he was like, “Get a photo”.
Sarah: Yeah, I know and all that shite.
Tom: Like fucking X-Factor! But, it was my first audition and it worked out alright!
Sarah: But a week later we were playing in Bath. Then we went it the studio to do a couple of demos with Gordon Raphael [producer of the first two The Strokes albums and Regina Spektor]. Then we started thinking about when we would make the album, it took a bit more time organising it. Then went on tour for a bit and then did the album. So we’d only been together like three months before we were recording it.

So you must have had songs and material before all getting together then?
Sarah: We’ve got hundreds. Literally, at home, about 300 songs.
Mat: But not all Scanners songs...
Sarah: Okay, maybe 100 Scanners songs. They might not all be brilliant but yeah.

What’s the songwriting process, then?
Sarah: For the first album they were already written as me and Mat had been writing a couple of years before. But now we’ve got new stuff that we are playing live which is more everyone together at rehearsals. But Mat is the main lyric writer.

How does a song become ‘a Scanners song’?
Sarah: I don’t really know what ‘a Scanners song’ is. There are so many different sounds. I suppose some people find that a bit confusing but I kind of like that. I get so board of just the same sound on an album. The reason we use the instruments we use is just ‘cause we have them around the house. They are what we have been able to afford. When we get loads of money, we’ll get lots more.
Mat: I think lyrically there is a theme and I think Sarah’s voice gives it an atmosphere that holds it all together. But there are a number of different types of songs and I think that the second album will be full of those different sounds as well. We aren’t going to just have one sound. I don’t like albums like that, I get bored. I’ll listen to the first four tracks and then won’t listen to the rest. All my heroes have different sounds and songs. Personally, when I write I don’t like to think about it too much. I’m not very good at trying to style it as I write it. A lot of the time what happens is, it gets written and still needs to be fully developed into a Scanners song. I’m really looking forward to the new album because we have practiced so much, and been on tour, we’re so much better at playing live – I really want to do an album with a liver feel for the next one. We’re now trying to write spontaneously in the rehearsal room. Maybe I’ll bring an idea but we’ll flesh it out together straight away in the room and that sometimes brings out something a bit more exciting for me personally.

You are signed to US label Dim Mak. How did this all come about, because it’s the polar opposite to the path the majority of UK bands take?
Mat: Well it was all a bit freaky, wasn’t it?
Amina: Yeah, tell the story...
Mat: Yeah, tell the story...
Sarah: (Laughs) Okay, well it all started with a lady called Heather from Capitol Records
Amina: In LA.
Sarah: Yep, and she is just one of those people who goes on the internet and listens to everything. Then she makes mix tapes every month of all the bands she loves, some are great in my eyes, some not...
Mat: But she’s always right about what’s gonna sell...
Tom:Yeah.
Mat: She predicted James Blunt would do well and bought him to her label. You’ve probably got your own personal opinion about that but she did well with him.
Sarah: Anyway, so she gave Steve Aoki (president of Dim Mak) one of these mixes with a song of ours on. He then went online and sent us a message saying, “hey guys, love this band… blah, blah” and that he was coming over in a couple of months’ time. In that time we’d decided we were going to record our own album because we were sick of waiting around for a label over here, and nowadays you don’t need labels anyway. So, in the process of recording it, he came over and said when we’d finished it he’d release it.
Mat: Sometimes A&R men are just really nice to you but he’s this quite upfront Californian. He’s also someone who keeps his word, which is kind of nice.
Sarah: In fact, we released the album before we’d signed anything!
Tom: It was all verbal wasn’t it...
Sarah: Yeah, but he owns the label so he is the boss, that said what he thought.

How have you gone down in the US?
Mat: Yeah okay, we’ve been over there four times now. It’s weird coming back here after playing on stuff like the Carson Daly show and then coming back and playing a small club. But that’s just the way it’s worked out. Ideally we wouldn’t have had such a gap between releases here and there, but it’s been a good experience.

I’ve seen you play the odd raucous live show where everything and everyone sort of ends up on the floor at the end. Not enough bands do this nowadays - can we expect more of this?
Sarah: It’s Amina who is on the floor usually. (Laughs)

Is this usually linked to how much you’ve drunk or is it just in the moment?
Amina: Well I’m usually on the floor earlier than before the end.
Mat: It’s not unrelated!
Amina: I don’t think any of us can ever fake it. If we’re having a bit of a rubbish time on stage, I can’t dance, I can’t do anything. Its only when I’m really enjoying the gig and the music and at the end it’s just noisy so you just have to go a bit mad, because it’s just... fun!
Sarah: I haven’t been able to do a stage dive yet. I’ve been waiting but am scared I’ll flop over or everyone will just part.
Amina: I’ve stage dived a few times and that was fun. But if you are a girl it’s not generally a good idea, its not a good look if it all goes wrong. (Laughs) Plus, I usually get hit round the head with Sarah’s bass, so that’s enough half the time.
Mat: It really depends on the day though. How good the crowd are, how we are feeling...
Sarah: We actually had our first crowd surfers at a French gig. I always find Londoners a bit more sedate; they don’t want to show they are having any fun. I just stand and stare at them a bit more and scare them out. (Laughs)

So, Amina, what do you think you bring to the group?
Amina: Looks...
(Long pause, then tape recorder ran out)

Scanners release ‘Raw’ on Monday November 5 via download only, with the album Violence Is Golden following in the UK early 2008 on Dim Mak. You can also catch them on tour with Asobi Seksu right now.

More information can be found at Scanners' MySpace page: HERE – well, what you waiting for? Get over there!