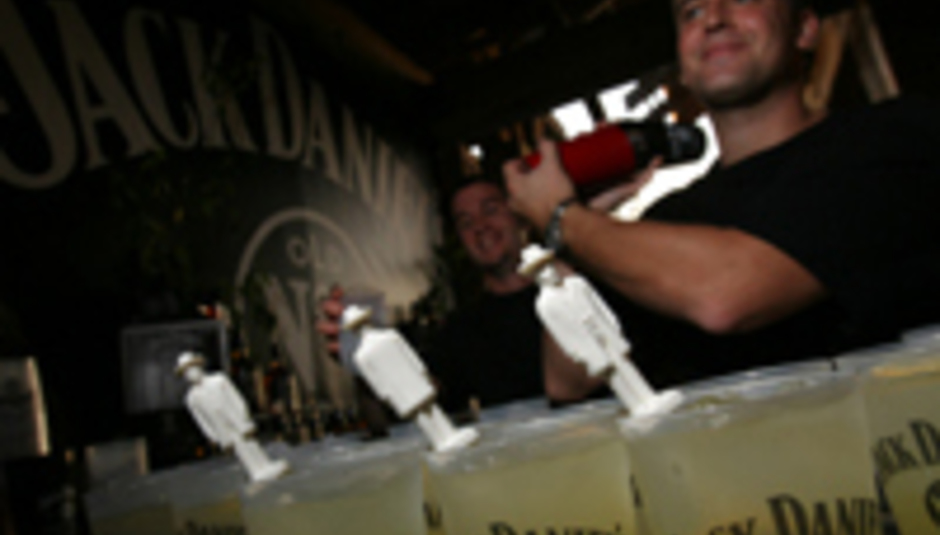 I’m flying to Nashville, Tennessee, in the grand old US of A to help celebrate the birthday of one Mr Jack Daniel. I drink his produce all year long, so it’s about time the pilgrimage to his home was made in order to toast the great whiskey-making legend.

I’m already slightly wary of US Customs as I land in Atlanta for my connecting flight. I hear they’re ever-so-slightly suspicious of those of darker skin. True to form, I get fingered (not literally) and plonked in a waiting room for just enough time to miss that connecting flight. Now is no time for wild accusatory conspiracy theories though: I gotta get to Nashville!

One word springs to mind at this moment: ROAD TRIP. Yep, okay: two words. Whatever.

Armed with a packet of peanut butter M&Ms and a bag of jalapeno-flavour crisps, I stumble upon a gang of similarly afflicted reprobates to accompany on my four-hour journey across the American Deep South.

Giant city ring roads (think the M25 times ten… M250?) and roadside fireworks outlets aside – huge warehouses selling just three things: fireworks, groceries and beer (!) – there was no bother getting to Music City and we arrived tired, hungry and ready to drink. Only one of those things really got sorted properly. There’s only so far a bowl of red and green nachos will go.

Now Nashville’s a city of history and the Jack Daniel’s influence is clear to be seen as you stroll past the tacky souvenir shops selling every level of JD tat, but the Broadway is the place to go for a rip-roaring honky-tonk, grassroots blues time. Live music in every bar, beer by the jug and then there’s some more beer. It is nice. After travelling 5,000 miles across the globe, though, it would be a waste to spend all the time boozing and barfing ad infinitum, so tours of the JD Distillery and then of Nashville over a mind-bending, hangover-crippling four bloody hours are undertaken.

An un-named associate got so wasted after his own sapping journey to land of whiskey and blues that he spent the rest of the trip redecorating the hotel and verbally abusing his girlfriend. No way was that happening to me. I’m way too cool.

After nearly being lulled into buying about £17,000 worth of Jack Daniel’s memorabilia by the Southern charm and guile of the local folk of Lynchburg (I settled for £3,500 worth after I realised what a cash-happy knobber of a tourist I was being) it was time to kick back with some more boozing. It was historical and stuff, though. Really.

Located down the historic but distinctly pokey backstreet of Painter’s Alley, The Bourbon Street Blues & Boogie Bar is a dingy affair where jambalaya’s flowing, long-winded blues bands are playing and balconies creak in time to the music, much to the despair of my fear-filled mind. It’s all fun and games though, and it’s probably still better than KanYe West’s after party, going on across town. He likes Keane! It was the never-ending bus tour of the city that nearly ended me. I was only given hope by the coasters I got from the vinyl pressing plant. The centres of dead 12”s work incredibly well when you’re looking to rest your coffee on a table.

The knowledge gleaned from that establishment was nearly endless. For instance, it was alleged in the ‘60s that you were a ‘nobody’ unless you had a pink bathroom. Who knew?

It was time for less trivial matters, however. The sunlight was fading and the BBQ was burning. It was time to eat meat and drink whiskey and listen to some good music. And oh how good the music is.

With Jack Daniel’s New Silver Cornet Band as the backing to Juliette Lewis, Shingai Shoniwa and Patti Smith, the Birthday JD Set is shaped to be a corker. With each lady set to play five songs, two of which must be covers, it will be compelling viewing.

The Noisettes frontwoman is the first to take the stage and her five songs include a remarkable cover of T-Rex’s ‘Children Of The Revolution’ as a closer. Shingai was the lady least likely to shine up against a Hollywood Oscar nominee and a living punk rock icon, but she’s arguably the most impressive and powerful in this little hut on the hill. The JD’s still flowing in its various guises but that doesn’t cloud my judgement one bit: this euphoria is real.

There’s no chance of Juliette Lewis letting the tempo fall as the star actress struts and poses across the stage as only she (and Mick Jagger) knows how. She’s a fighter and is used to people not knowing her songs so she’s in familiar territory tonight but aw little bit of excess energy goes a long way to making a great show. As she jumps down into the crowd, into my personal space, I feel panic and need for action. Do I wrestle her to the ground in a blaze of manic ultra-love? Do I dance along like a twit in full knowledge of the beautiful young lady to the side of me armed with a television camera, filming the show for UK viewers? Hell, I’ll just stand here and act cool. Yeah. I’m cool but... Ooooh, there’s no resisting temptation now. Is there.

Once the dust has settled and the saliva’s dried somewhat, Patti Smith slopes onstage and as humble as she is commanding, leaves a room full of drunken idiots completely speechless. It takes some doing. Bear in mind everyone is really drunk and really idiot.

Ms Smith directs the flow of the show to a gentler more intense place and as she covers Nirvana’s ‘…Teen Spirit’ she makes you wonder if you ever needed to see the grunge martyrs in the first place.

Introducing Shingai and Juliette onstage for the finale was a no-brainer and probably a contractual obligation but it’s all fun ‘n’ games none the less as the two upstarts share a microphone and all attention remains on Patti.

Patti publicly not high-fiving Juliette’s lumberjack-esque guitarist onstage at the end of the show will surely remain as one of the finest Birthday JD Set moments in years to come.

You can watch it for yourself on Channel 4 on Monday, December 3 at 12am. That’s late. I hope I’m on it, licking ears. And windows. And my balls.