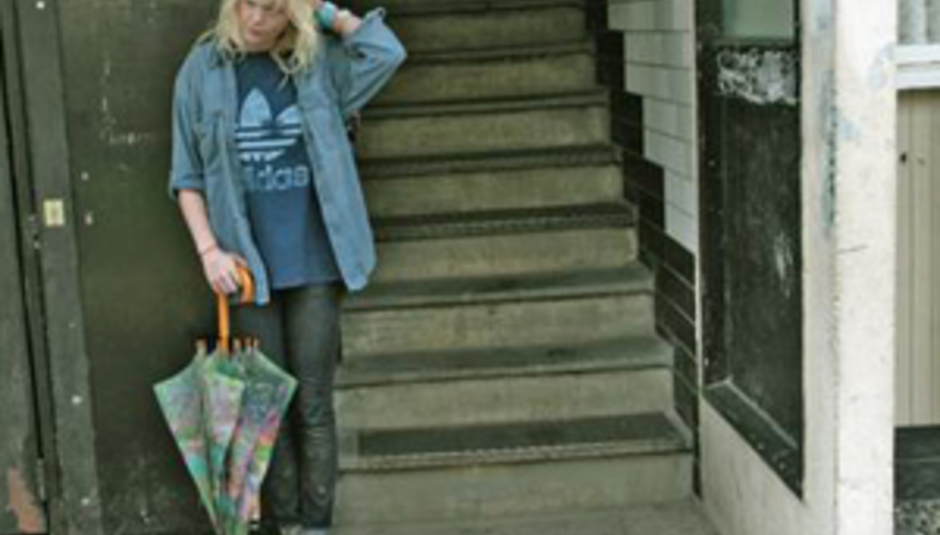 These words puke forth. I can’t write like this, it disgusts me. I know all this appears gushingly sentimental, naïve, ridiculously self-centered, and that worried me for a while, and can’t be healthy. But it’s for no other reason than because that’s exactly what Laura Marling is.

This strange synchronicity would wrangle in most cases, ears would fill with friction and static, the head reared from obvious, ugly emotion, but she’s (and me?) far too young for the emotional scrapheap. Maybe everything she sings is nothing but a kneejerk reaction to the previous fractions of her life, a peripheral reflection on lost time. Grow up. But who hasn’t felt so confused and emotional that you care so much about everything in one single lonely moment you open up and sweep back a wave of tears? Argh. She’s an affirmation of that adolescence which passed us by like the last cold summer. Puke. Fingers drip onto keys, and context is needed…

For a few summer months, indie sickened me on sight. The only music I could validate to my mind was dubstep, grime, and a few nostalgic post-punkers clutching at futurism over classicism. Everything else left me empty, in sentiment and sound, washing over me like the pissyest of rain. I saw Laura Marling play a few times, once beneath the Kings Road and in the weirdest of circumstances, thinking nothing of it.

But, once the spittle settled and vitriol receded with the final summer months, the quality of the music itself rather than the futility of the entire indie enterprise was brought back to the front of my mind. In one last Jamie T led hurrah even the Maccabees started making sense in their own retarded, mongoloid way. And I started listening to Laura Marling.

Laura Marling is 17 years old. She has the same tender, carcinogen scarred throat as Beth Orton, and a transient, brilliant way with melody and melancholy. Just so you know she’s also beautiful, but in a kind of fawnish, pre-sexual way. Pretty girls make gravy, apparently. She’s nervous and reticent, still struggling with the crux of her own conviction, but compare her to her contemporaries and it seems Laura’s gaze is set upon distant lights, whilst Kate/Lily are only just noticing the new puke stains on their pumps.

Much of her success has been on the strength of one demo - the self empowering, cloying sentimental New Romantic. It’s lovelorn in self-aggrandizing black and white, dewy eyed and heartbroken. It’s myopic and beautifully self-centered, simultaneously tugging between indescribable vacancy and complete verbal exhaustion. The first time I heard it I aged decades, and Laura wrote and recorded it at 16…

It’s now the opening track on My Manic & I, an EP I would put every ounce of my worthless body on if I felt it would make a difference to anything or anyone, but if you’ve read this far there’s probably little need.

As for the half-interview, it happened a while ago, the other side of a weary long summer. And to be honest, it was pretty pointless. Dangerously close to Hoxton Sq, we chatted in a diner I once got thrown out of at 7am when a friend drank pancake syrup from the bottle and puked it up on their front steps, refugees from the previous night. I only had 10 minutes with her until her meal arrived, and that’s nothing with an awfully polite young lady.

Your DiS profile says you’re “on a mission to bring the music industry back down to earth… not impressed by this new indie scene of constant rolling out of new bands and the whole scenester image tho i am one of them but at least i know…” Still stand by that?

I guess so. That’s pretty arrogant I guess, quite ambitious. Though I don’t really care about all that anymore! It’s just… cheesy.

Are you conscious of the popularity of other, mainly London based, female solo artists? Do you reckon people will directly compare you to them?

Well, I’m not from London, I’m from Reading. And I’ve got a Berkshire accent not London - Kate Nash has ruined “fit” for everyone… But what quality good girls are out there? I mean I like them, but I think we’re completely different. They’re indie pop. I don’t fit in that scene. I don’t really know - it’s just weird that female and male are thought about differently… Indie is very male dominated but being female hasn’t held me back. Being under 18 has though!

Most singer-songwriters have a completely generic set of influences, how do yours compare to theirs?

For the new EP I’ve been listening to completely different types of music, like Bonnie Prince Billy and lots of American anti-folk. I mean I still love Ryan Adams and Joni Mitchell and Bob Dylan, that’s the music I grew up with. I haven’t listened to any new music for ages; I live in a place with no TV or internet.

You sung on the Rakes album, and you seem to straddle indie/folk genres pretty effortlessly. Any chance of going electric in the future?

Well, The Rakes are really nice people. Alan Donohoe just MySpaced me, and we went from there. I guess I started off playing Way Out West gigs, which is the most indie thing you can do! I was almost indie for a while I guess, but I came back to folk. Indie brings a lot of people together, so it has its plus points, though it’s quite cliquey. I might go electric in the future… maybe around album three...

What are the plans for your debut album? Due for release in the New Year?

Yeah, I think so. We’re recording it in September, so out next year. New Romantic isn’t on it, though we’ve just re-recorded it without the cockney accent. I don’t think it’ll be on the album, unless we do it a lot differently….

Save it for the 25th album boxset…

She went off to her salad, later to play to a packed and hushed Old Blue Last. Perhaps the best gauge of her performance was offered post-gig on the tube platform home; three drunk teens were singing New Romantic word for word, floating down the northern line on a rush of hot air.

- - -
Laura Marling plays live at the dates listed below 'til the year ends. Her MySpace is here.

The My Manic And I EP is reviewed here