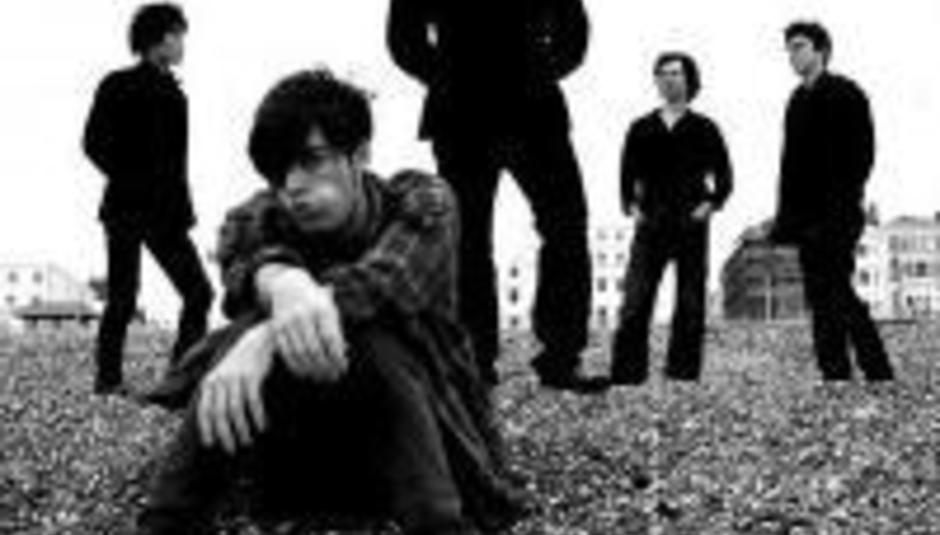 Never intending his music to be delivered in a standard ‘guy with guitar’ format, Cook’s earliest rumblings belied an ambition for bigger and grander arrangements. Now his songs are executed in a five-piece formation, and comparisons to the likes of Arcade Fire are rather more frequent than nods to any soloist du jour.

Cook and band play this Saturday’s DiScover Club show – held as always at London’s Notting Hill Arts Club – with admirable support from Stars Of Aviation and Caz Mechanic (full details here). Before you head on down to the free-entry show, as you should, DiScover Bobby Cook

When did you first start playing your weapon of choice, the guitar, and when did you realise you had a voice to boot? When did you take your first tentative steps into playing live, and (presumably subsequently) recording?
Well, it all started with recording. I was always interested in multi-track recording a lot more than I was into playing live. I got my hands on a four-track recorder when I was 12, and spent the majority of my teenage years in my bedroom making compositions and learning how to layer sound.
The whole ‘Bobby Cook’ project started in my bedroom studio two years ago, way before I got the band together. I remember first putting the early demos on MySpace, then getting messages from promoters, A&Rs and fans asking when my next show was. That’s when I realised it was worth pushing it and getting the band together.

What sort of comparisons have you thus far attracted – as a singer-songwriter, these are never far behind any initial flirtation with the press – and which have been flattering? Which, if any, have left you rather stumped? Are there any similarly sounding acts that you can absolutely identify as an influence?
Well the most flattering was being compared to Arcade Fire, who are among my heroes. I, personally, would never see myself in the same league as them. Bruce Springsteen (The Boss!) was another one that was a bit out of the blue. The most common one is Lloyd Cole, who I've never heard of, and the other is the band Orange Juice. The most insulting comparison was Travis. Urgh. I can't remember who said it, but I didn't take kindly to it.

You’ve a single, ‘Déjà Vu’, out on Dance To The Radio: what preceded this release, and what’s followed since if anything? How’d you come to work with DTTR on this release? Is it a label you will be working with in the future?
I’m not sure exactly how first contact was started but I remember meeting them (minus Whiskas) after we supported Jimmy Eat World at Leeds Met University early this year. It was flattering being the first act outside of Leeds to be part of the label. The release was followed by a mini-tour that me and my band did up and down the country, which went down really well. It's still early days for me and my band so I couldn't tell if we have any future plans with DTTR, but judging on that last release I see no reason why we shouldn't.

How’d the single go down? I must admit to missing it at the time, but it sounds like the sort of thing that must’ve attracted a fair degree of praise – immediate and catchy, ‘bouncy’ even. Do you read much into critical perspectives at this juncture of your career, or are you quite blinkered to external pressures/opinions?
As far i know the whole ‘Déjà Vu’ campaign was a success. 6Music championed a fair bit and I did a few radio shows, which I got a lot of good feedback from. I never really experienced any bad press yet, apart from a review from The Guardian Online which was more interested in slating my haircut than the actual single, the dickheads. I tend not to read that much into press; I can't be bothered. Zzzzzzzz…

Saturday will see you playing in a full-band set-up: nowadays, how often are shows performed solo and how often flanked by additional players? Do you prefer one set-up over the other, or is it simply a case of adapting to the situation at hand wherever possible?
Well because I've never seen myself as just me and guitar it’s always been a big sound behind me. I've always preferred playing with my band. I've have done gigs stripped down, with strings and stuff, but I think my music works stronger when I’m playing with the full monty!
My band has developed their own name for themselves I think now; they do add stuff to my sound, so I wouldn't say they’re session musicians at all. I see them more like my E Street Band. This Saturday should be interesting because it’s our first gig in a while. Also, we've got a lot of new material to try out… don't miss it!

Radiohead are listed as the first influence on MySpace: what’s your take on In Rainbows? Everyone has one, after all…
I find Radiohead albums are like hard books to get into: it takes a few chapters for you to get into them, but when you finally get in their groove it's spectacular! Track nine, ‘Jigsaw Falling Into Place’, is my favourite so far.

I see you’re supporting Archie Bronson Outfit in November – is it good to play alongside boisterous boys once in a while? Do you have a favourite sort of bill to play on? (Bearing in mind Saturday’s is fairly quiet!)
Yeah I’m not so aware of what ABO are like, but from what I hear they’re pretty rockin’. I think playing alongside Jimmy Eat World was one of the high points... not that me and my band are that into them, but more down to the fact we were playing to 800 people or more. It's along shot, but it would be great to do some shows with Arcade Fire.

Touring: is this something that’s a realistic proposition right now, or do non-musical circumstances demand that you stay in London? Have you had the chance to tour all that much, and if so do you already have favoured cities/towns to visit, or venues to play in?
Me and my band LOVE touring. It’s one of the best things about being in a band, and gives us the chance to act like ten year olds again. It's great fun. We've got a few tours under our belts now, with Larrikin Love and Brakes, and that mini‘Déjà Vu’ tour we finished in August.
I love playing up north – we always get a good reception up there. So far I think Glasgow is the best place we've played. And, of course, bigger the venue the better!

There’s been something of a mainstream explosion of capital city solo talent over the past year, for better or worse: do you see yourself as potentially able to mirror some of these successes? Is Jack Peñate as bad as the reviews have suggested, or do you think he’s simply unfortunate to be on the receiving end of some (possibly post-Nash) backlash?
Poor old Jack! I think people are judging him for the wrong reasons. The press are trying to make him out as if he's trying to be a smart, witty songwriter, but he's not. He's just a simple pop star making simple pop tunes, that’s all. I couldn't say I’m a fan but I don't agree with the press he's getting... poor old Jack. All round I think the explosion of solo stars is a good thing, although I've never really seen myself as part of that scene.

How is 2008 shaping up for you? Is a debut album in the pipeline a’proper?
Well, we're still in search for a record deal, but the album is pretty much ready to record. We’re looking into possible producers that might be up for the job, but I think 2008 is the year for me and my band, so watch out!

See Bobby Cook, and band, for free this Saturday (October 20) at our once-monthly DiScover Club at the Notting Hill Arts Club. The show is over-18s only, and ‘happy hour’ drinks are available at the bar. More details here.