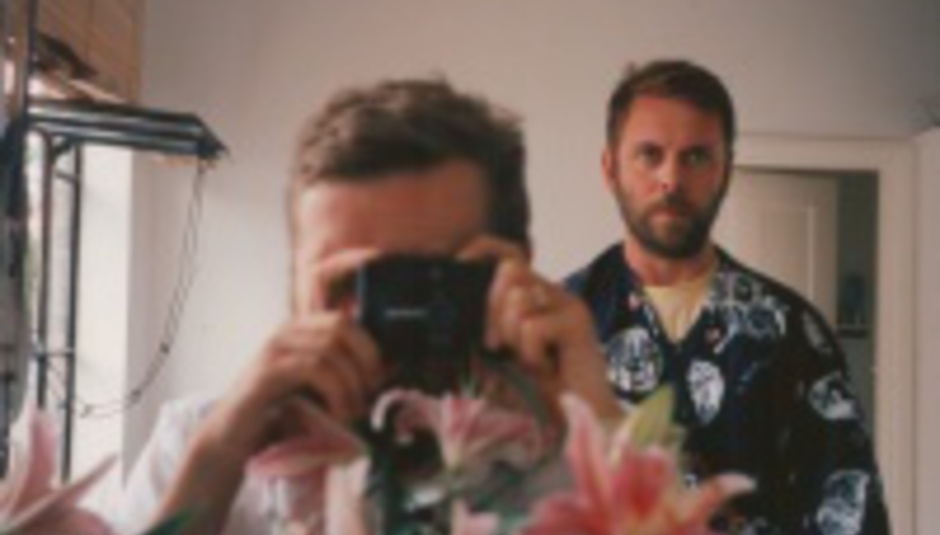 Fancy playing away whilst your partner's out of town? Head to the country whilst Archie Bronson isn't looking for a dirty weekend frolicking by the hay bails. Away from prying eyes are The Pyramids - potty-mouthed vocalist Sam 'The Bishop' Windett and stick-smith Mark 'Arp' Cleveland, both of Archie Bronson Outfit renown - waiting out in the barn, open-armed and wide-legged.

This whirlwind side-project, unleashed ahead of the next ABO record, is an opportunity to expel some demons and take some chances after a year touring Derdang Derdang. DiS spoke to Mr Cleveland, who suggests The Pyramids has been quite some learning curve for the duo...

Can you let us in on this new venture with The Pyramids? There are obvious parallels to be made, but in what respects do Archie Bronson and The Pyramids share similarities, or don’t?
Well, Sam and I made a record that doesn’t have Dorian (Hobday – the third member of ABO) on it, so we called it something else. The thought for it came after we got back from Nashville where we made Derdang a couple years ago now, and we were all working a bit and Dor was off at work and Sam and I just nailed out a load of songs in a day and thought how crazy it was that we wouldn’t do anything with them for ages. So, we thought that we should start another outlet, another band; something we can be to get material out as. It took about a year to get that happening, in terms of us getting into the studio.

Were the tracks that feature on the self-titled debut record a long time coming?
Not at all. The idea was that we were going to record those songs and we had a week, a week off, and then another week to record. We then reconvened with Head for the second week, and it turned out we had gone off the trail – the stuff we had recorded in the first week were older songs, and apart from ‘Festoons’ and ‘Glue You’ everything on the album was done in the second week of recording. ‘Hunch Your Body, Love Somebody’ and ‘White Disc Of Sun’ were written and recorded ten minutes later because of the way we had set up the studio: play one end, write a song, give it to Head, time to have a cup of tea and ask him to press record.

The studio you produced the record in, it was a barn you helped convert, right?
Yes, but it was really Head who worked on it, who produced the album with us. He set up his gear down one end and it was just a really basic set-up with a 16-track desk. Right in the depths of the Berkshire countryside.

Video: 'Hunch Your Body, Love Somebody'

How do you feel The Pyramids differs in terms of what you have previously offered?
I think it is probably a bit more straight-ahead and a bit more psyche. I guess we just wanted to make, not just a garage record, but a record that sounded as fresh as it possibly could be. That is slightly different to a lot of what we have done with The Archies. Though some of Derdang was like that, in that we finished off some ideas whilst recording, the whole of The Pyramids was pretty much brand new and something we haven’t really done before. It can either be disastrous doing that, or it can work and, well, we had a fair few disaster songs that didn’t make it. But it was a invigorating way to record.

Is it refreshing in that sense to return to point one, because this is quite a low-key release compared to the fanfare Derdang received?
It’s really refreshing. I guess that is part of it as well, because we had been recording together as Archie Bronson for a long time and it was fun to just have something which we didn’t have any thought about other than just wanting to make a record.

Are you planning to tour as The Pyramids live at all, or is it more just something that documents a glut of creativity in the studio?
Mainly the latter, but I think we’ll do a few shows because it seems it would be too fun not to. But we’re not going to tour it loads or anything – we’re going to get on and make another Archie record and get busy with that. But we’ll definitely do a few shows for it before New Year.

With regards to new Archie Bronson material – was The Pyramids a separate entity and opportunity to take a chance, or just as much a feeder to future Archie material as anything else?
I don’t think, musically, it will feed ideas, but mentally it has freed us up just a bit because we had been touring the Derdang record for so long, and songs do get a bit stale. There’s no doubt about that. So, just to be able to come out and record some new songs and this whole record that I am getting to know as I listen to it is a refreshing way to go into making another Archie record; it has given our mojo back somewhat. Just sorting out the wheres and whens has helped everything take shape, and in that sense The Pyramids is a good lesson for us in terms of going into recording with maybe just an idea of what we want but just letting the record make itself. That instead of producing something too particular, because albums can take their own life when you start recording them, so that’s something we definitely want to take to the next Archie record. We’ve a bit more room for experimentation.

'Hunch Your Body, Love Somebody' is out October 8 and The Pyramids follows on November 5, both through Domino.