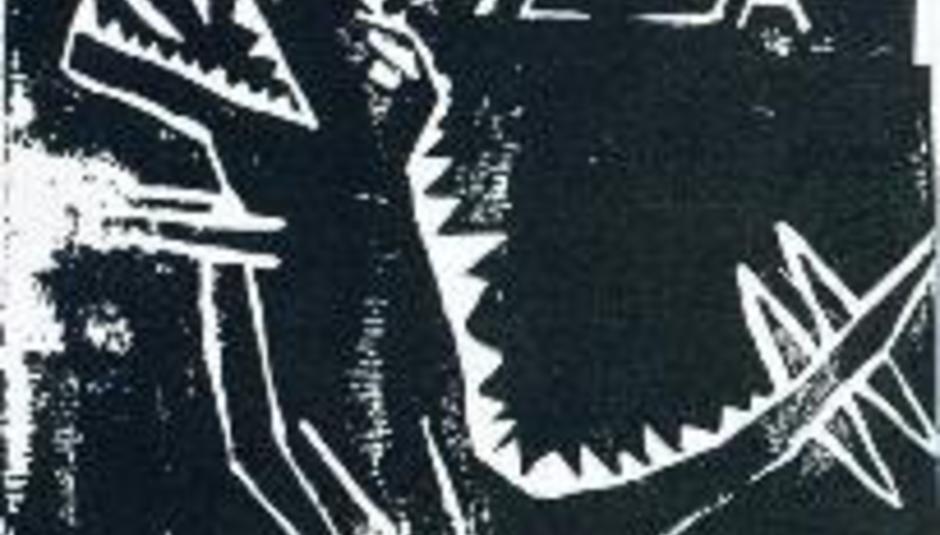 Zettasaur are four men from Brighton making a mighty punk-rock racket; their listed influences, including 90 Day Men and Part Chimp, might give you some idea of the direction their squall can take. Also, that the foundations for the band were laid following a visit to the thrice-yearly ATP Festival should solidify the notion forming in your mind that Zettasaur can rock, ever so well.

The band is James Hamilton (guitar), Tom Lavis (guitar/vocals), Ted Hamilton (drums) and Matt Davies (bass). Certain promoters have gone so far as to call them the best new band in Brighton. Us? We’re not laying ourselves on the line like that, but know this: Zettasaur are wonderfully noisy, disjointed, discordant, clanging and clacking and, sort of, reminiscent of Shellac when they really cut loose. Very, very good is what we’re saying, based on their recordings to date.

The four-piece play a special DiS show today, also featuring Down I Go, Charlottefield and Manatees, at London’s Fly. Click here for further details. Before coming down for a spot of the rock, DiScover Zettasaur (answers by James)…

When and where did Zettasaur burst into being? What was the catalyst? Had members been involved in other groups before? What common influences could members initially draw from, and what acts could you currently hold up as ‘comparative’. Do you think you’ve found ‘your sound’ yet, or is this developing?

Matt and I were on the train coming back from ATP and decided that we should make a concerted effort to rent some kind of warehouse where we could all live for the summer and make a serious attempt at some music. We ended up with this totally amazing open house full of friends, probably about half of whom paid rent. It was always a complete mess but everyone was really tolerant and we played every night until moving to Brighton. In the first half that year I had been playing with some other friends – we had about one and a half songs which we played at a party, but we didn’t have an ending to the second one so we just played until we were tired. Thom played in a college post-rock group and did various acoustic things.

As individuals we have pretty disparate tastes; I think Shellac were probably the only band we all liked at the time. What we had in common was a desire to take playing music seriously and practice as much as possible and get some momentum. Comparisons are always really difficult from within, as how we see the music is most likely totally different from how someone who came to see us or listened to a recording would see it. It’s all coloured by intent and familiarity, I think.

I hope to God we haven’t found a sound yet, as the idea of writing what is essentially the same song, over and over again, is incredibly depressing. I think a lot of groups fall into a trap with the concept of finding ‘their sound’, but in doing that you are just formulising your music and restricting yourself, asking questions like “Does this sound like us?” when in reality the only important question is, “Does this sound good?”. That’s why bands like Liars or 90 Day Men are so awesome, as all their records are so totally different; they are not concerned with how people define them or what people expect of them, they just do what they think is good or has artistic value.

What releases are available/are going to become available soon? How do you find recording? Stressful? Still new and exciting? Is it tough capturing the sound in your heads?

We have a 10” split with a group called Lakes on Signature Tune, due mid November-ish; a 7” on a label from Margate called Left Turn; and, before the end of the year, a split with Epideme on Unlabel. I think we all really adore the process but it is stressful, purely because it is always so rushed: we had one day to record and mix the songs for the Lakes split and one day for the 7”. It’s really amazing to have something resembling a finished product at the end of it, but we would all dearly love to be able to put a bit more time in.

It is tough capturing the sound we want. I think the recording for the 7” gets the closest. We have a really simple set-up and kind of imagined we could just plug everything in, press record and capture the reality of it. The fact is that so much is affected by the equipment and the room and whatever else that you then have to spend hours and hours fucking around with it in order to get back to something approximating the actual sound.

There’s a certain aggression in the MySpace songs – how does this translate live? Are you frenetic folk? Should we anticipate swinging arms?

I really hate the idea that anyone would misconstrue our music as aggressive. For me, personally, loud music has always been a really positive, invigorating thing; the few occasions where I have seen bands who adopt a kind of combative, confrontational stage personae I have found it a bit disgusting. I suppose the idea is to shake people up a bit and get them thinking, but I am not really sure that that’s the best way to do it though. On top of that we were all so paralysed by nerves for the first few shows we played I don’t think anyone moved anymore than was absolutely necessary in order to play the songs. We have relaxed a bit though, playing live is actually enjoyable now. But no: no swinging arms, no windmilling, no knee slides, no live guitar falatio.

As a relatively new band, have you experienced problems getting shows? Have most been a result of people approaching you? If so, I guess that gives you a confidence, knowing that people want to see you in the flesh…?

Initially it was hard: when we moved to Brighton the only recording we had was a total piece of crap recorded a month after we started playing together. A little later a band pulled out of a show a friend of Matt’s was putting on; he needed a replacement and said we could play despite having no idea what we were like. Steve Ansell (Blood Red Shoes, Cat on Form) was doing the sound that night and offered to record us. We sent off a load of CDRs to people we thought might like it, plus I think he mentioned us to a few people. Thanks very much Steve. It is immensely gratifying when people express any kind of positive sentiment about the music. We put so much time and effort into this: we practice every week night, spend time outside of that talking through new sections or structures, so it is nice to feel that it is not a waste of time.

The Brighton ‘scene’: healthy? Bustling? Over crowded? Is there a neat community of acts/individuals supportive of one another? Favourite pier ride…?

I recently re-read a Lightning Bolt interview in The Wire from a couple of years ago. They talk about how people often want to believe in this idea of a cohesive scene with a shared morality and set of goals but how in reality that very rarely exists. I kind of agree with that I think. There are certainly some really great bands in Brighton. For example, Charlottefield are really incredible live at the moment, Ack Ack Ack, Trencher (one-third from Brighton) and a load of awesome noise/improv groups/acts, like Daniel Jones, Made out of Wool, Towering Breaker and a couple of amazing Leopard Leg off shoots, most notably Jettatura and Maya’s new group whose name I can’t remember. But as for the existence of a ‘scene’, I don’t know. Having said that there is certainly a feeling of community, based around Edge World (record shop) and the Penthouse (bar above the Freebutt). And it’s not technically a ride, but the Dolphin Derby.

Have you had the opportunity to tour at all, and if so what cities are your favourites to play? Is there a burgeoning UK network of unsigned acts doing their bit to help one another? Is geography still important in terms of developing scenes/collectives, or has the internet done away with this localisation? I.e. is there a ‘Particular City’ sound these days?

No touring just yet. The internet has undoubtedly had a massive effect but I think geography is still really important. The most essential aspect of music is surely people going to watch bands play and if there is no one in a particular town into the kind of music you are playing you are going to think about moving somewhere where people might like it. As a result little collections of people playing similar music do build up. However, in Brighton at least, there are so many bands making such a variety of music that you couldn’t possibly talk about a ‘Brighton Sound’.

Isn’t tea great? On topic, a bit: is it dinner time or tea time round your way, and why are dinner ladies called dinner ladies when they work at lunch time?

Yes, they are interchangeable. They’re called lunchtime supervisors. Get with the programme, Diver!

Friday’s gig: a bill to be proud of OR is it all a little too loud? You fond of playing bills of similar-sounding acts or is variety awesommmmme?

It’s pretty rad to be playing with Charlottefield. I don’t think it’s ever that black and white, it is just nice to play with bands that you think are awesommmmme, if for no other reason than that you don’t have to pay to watch them.

Check out Zettasaur on MySpace here and see them live tonight at The Fly, London. Doors at 8pm, details here.