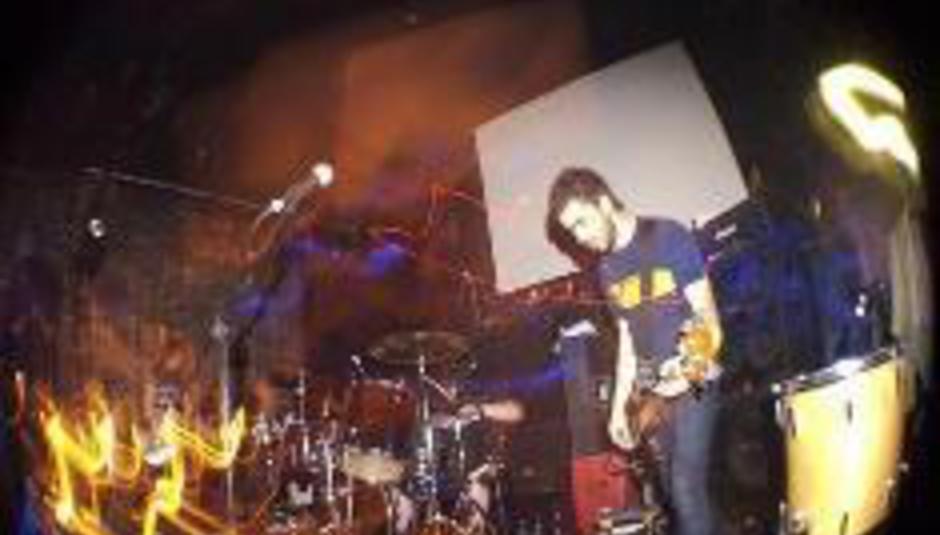 Manatees: sticking it to "stuck-up c*nts"

Manatees: sticking it to "stuck-up c*nts"

Manatees are far from the most rock and roll creatures of the Animal Kingdom; silky swimmers though they most certainly are, their bulk can be rather a burden when it comes to boats on waterways and the avoiding of. Outboard motor + manatee = a crimson tide. Placid, docile, slow, possessed of intelligence but not enough, the creatures are on the ‘threatened’ list ‘cause, frankly, they’re just not hard enough.

** Manatees**, the band, are very different: although they’re far from the first out of the blocks when it comes to making an impact, their slow-release sludge-riffs and doom-laden vocals eventually stir the soul into a bubbly frenzy; prickly hairs and dilated pupils, tingle fingers and tappedy toes. Or, rather, stomping feet, slow and incessant, like the drum beats that guide the Carlisle-based trio through their epic arrangements.

And they are_ hard. Must be the water.

Alex (bass and vocals), Greg (guitar and vocals) and Pauly (drums) have, to date, released a brace of EPs. Or mini-albums if you will. Or full-lengths, really, since they all rival supposed long-players in terms of duration. And scope, truth be told, musically. Ambitious though the trio’s music always isn’t, effective and affecting it is; the tried and tested is balanced with deviations into more creative territories excellently, and the result is a band both appealing to post-rock and metal fans as well as indie kids with an appetite for something a little meatier than their standard fare.

Ahead of their four UK dates – beginning tomorrow (Thursday September 27) – DiS caught up with Greg to discuss events in the Manatees camp since we DiScovered them back in February (linkage).

** You quite recently released a tour EP (review): what’s the deal there, then? Self-recorded and produced, is it? How do you feel it expands upon the Manatees sound since its predecessor, the ‘untitled’ (but not really) debut?**

The deal there was we had a bunch of material we'd been playing around with for a bit and we wanted to release something new to coincide with the June tour we were going to do with Bossk. So we decided it'd be nice to have something really limited, with handmade packaging, to sell only at shows or through e-mailing us . We designed and released it ourselves this time round, and I think its a massive step up from the record before hand. Whereas the first record was an endless barrage of pummelling noise, this one is more subdued, a bit rawer, and a lot more focused I'd say!

*Just what is up with that ‘untitled’ thing? What IS the debut EP’s title? Really, are silly titles a bit Last Decade? *

I don't know what it’s called! The original idea, I think, was for it to have no title. But then we decided to have a title printed on the inside cover: The Forever Ending Jitter Quest Of Slow Hand Chuckle Walker. Motivesounds released it as untitled, then people saw that title on the inside cover and got confused! Which I think is something we quite like to do, confuse people.

Silly titles probably are a bit last decade (our old band used to have much sillier titles) but I think it stems from our love for bands like Don Caballero and Botch. The Jitter Quest... title does have a humorous story behind it! Honest!

**Eugene Robinson contributes to the tour EP (full title: We Are Going To Track Down And Kill Vintage Claytahh, The Beard Burning Bastard). How did that collaboration come about, and are you a fan of his other collaborations? **

The Eugene thing came about just by Alex contacting him. He hadn't heard us before, but Alex sent him our stuff and the track we had in mind for him and he liked it! It just so happened they (Oxbow, the band Eugene fronts) were touring with Isis in the spring and they had a day off between Glasgow and Sheffield. So we somehow swindled Oxbow into playing Carlisle on that day, which is when Eugene laid down his vocals in the studio we use.

Obviously we’re massive fans of Oxbow, and although we ain’t heard all the bands he's collaborated with, Eugene seems to have a knack of being consistently brilliant! It really was nice to meet him, and (bandmate) Niko, as it’s rare that I've spoken to people in bands who have been around as long as they have and still have a massive passion for music old and new. Working in a music venue, I meet a lot of stuck-up 'next big thing' cunts. Oxbow duo was also probably the greatest thing I've ever seen or heard live, too!

This Friday is only your third London show, is that right? Do you enjoy your trips to the capital, and have they been worth the epic drive?

I think that’s right. The last show in London was bloody terrible! Blowing the power three times in a venue doesn't really make a fun gig!

Drives to London have always been alright as its always been in the middle of a tour, so we never have to travel that far really. Although it’s when you get inside London, _then _it turns into an epic drive. Why the fuck would anyone own a car in London?! It takes you twice as long to drive there as it does to walk... or so it seems to us!

The first London show, in Notting Hill with Down I Go and Rolo Tomassi, is still, I'd say, one of the best shows we've played to date.

Live, it seems, is where the band is best experienced: how much time do you spend rehearsing and perfecting the performance aspect of the band?

We practice three or four days a week for a couple of hours, and most of these sessions are spent writing new material. It’s only when we have an upcoming show or tour when we start going over the older stuff.

We don't spend too much time trying to replicate everything to sound like it is on the records; we tend to take a more minimalist approach when it comes to playing live. We just turn up real loud and hope that makes up for the missing bits ‘n’ pieces!

Comparisons to Isis and their ilk may grate rather, but do you think the band’s profile has benefited from such associations? Are you particularly fans of the music you’re compared to/categorised as, or are you – like so many musicians are – actually bigger fans of music utterly disassociated with what you produce?

Obviously we enjoy some of the bands we get compared to, and some we don't. I mean, in_ Zero Tolerance_ it said we had elements of Pantera in our sound. PANTERA?! We tend to listen to quite a lot of varied music – the mp3 player in the van is forever shifting from anything from Melvins to Queen to Iron Monkey to Genesis to Gogol Bordello to Descendents.

What’s next release wise? Are you to continue working with Motivesounds? Has there been interest from other labels with regard to releasing Manatees material? I should, really, set up a label just to release a quadruple LP of your existing material, right…?

Hah! Maybe you should set up that label.

Well, at the minute Eyesofsound are going to be releasing a double LP version of our debut. That should be out sometime by the end of the year. It will have a extra track that was originally intended to go on the CD version, but we decided to go back and record it for this release. It’s also being mastered by James Plotkin (Khanate, Phantomsmasher, O.L.D.), which is nice.

We're also going back into the studio to record a couple of tracks for a split vinyl that will be with The Freezing Fog (if you like the rock ‘70s stylee check them out!) There are also a few ideas and offers in the pipeline, but those will be announced when they come!

LIGHTWEIGHT! Us northerners will show you how to drink.

Manatees’ tour dates are as follows:

The London show is DiS promoted, and also features Charlottefield, Down I Go and Zettasaur. Tickets are a fiver advance, six on the door; for more details and tickets click here. MySpace? Got it.