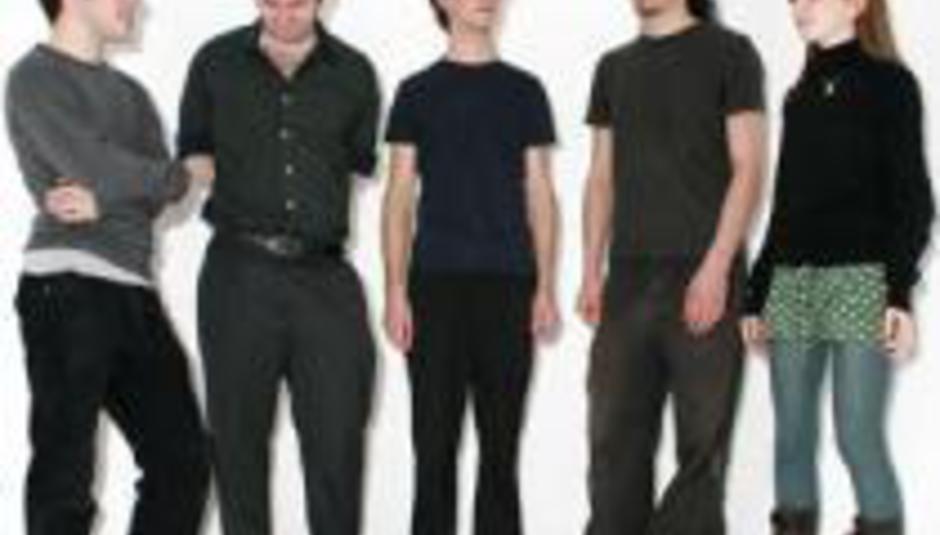 Cats And Cats And Cats, from various towns in the south of England, are one of a good few bands that DiS readers of a regular nature will have some knowledge of, but perhaps never actually heard. Reasons are easily understandable: the name’s something of an obstacle, immediately echoing the kind of artsy pretentiousness associated with post-rock bands past and present; the band’s lack of a readily available release, too, will have doubters leaping to conclusions: not good enough for a ‘proper’ deal, not worth the paper their myriad ideas are scribbled on, et cetera.

Of course, such preconceptions are both spot-on and rather wide of the mark, contradiction the name of the game here: the moniker is rather OTT, but say it enough times and it becomes fun. “Cats and cats and cats and cats and cats and cats…” really isn’t so different from, say, XL signings Ratatat: “Ratatatatatatataaaaaaat!” Compositionally, perhaps obviously, differences couldn’t be more evident: Catsx3 (let’s keep to that to save my already thinning fingertip skin) are progressive souls, keen on advancement beyond their youthful years. Now part of the Big Scary Monsters roster – read our label profile here - the five-piece are able to cross audiences and muddle perceptions. Danceable yet complex, full of intricacies yet boisterously brash, Catsx3 are onto a winning formula for sure, and one that’s showcased on their new split LP with This Town Needs Guns (review).

Catsx3 – alongside TTNG, House Of Brothers and Let Airplanes Circle Overhead – play this Saturday’s DiScover Club (September 22), held as always at London’s Notting Hill Arts Club in conjunction with Rough Trade Shops, and open from 4pm-8pm. Full details of the free-entry event can be found here)

Oh, and the band…

Come on - the name! What's up with it…?
It's taken from a quasi Russian play about triple-headed cats who fight bulldozers in the 3rd World War. We all saw it in a dank Moscow theatre in 1994 and were so moved by its portrayal of the feline struggle against the machines that we went home and wrote 100 songs based around the subject. A record label is yet to touch them.

How'd the band get together initially? Old bands breaking up? Inspirations around the time of the band's formation? What bands are influencing you, truth be told now…
The band was formed when Surrey heroes Clone Of Mel were destroyed in a fit of education. So the non-mathematicians decided to start, well, a mathy band, with the help of two new members from the Kent Youth Orchestra. Our influences differ greatly between band members. For instance, our drummer is a proper goth. Collectively, stuff like At The Drive-In, Neutral Milk Hotel and Youthmovies influences our sound.

The This Town Needs Guns split is picking up positive press – do you feel you've done ground work enough to now be making a step up to wider appeal/acclaim?
In a way, yeah. I mean, we're having to turn down gig offers every day and we're selling a lot more CDs, so I guess in that sense the ground work of touring a lot and ignoring our university commitments is paying off already. In truth we're happy to play to ten people each night and we'll keep doing what we're doing until we get bored/killed.

What other releases are currently available? There's a five-tracker, Sweet Drunk Everyone, yes? If you were to recommend your own releases to would-be buyers, how'd you sell 'em? Chronologically, or is one release a decent “beginners’ guide to…”?
Our last EP, Sweet Drunk Everyone is probably the best one to start with. It's our most diverse and complete CD as we're still yet to record a proper album. Then again, if you bought them chronologically hopefully you'd hear the progression between each CD.

Touring - you're on one. How is it going? Fun shows/good crowds? Are there towns where you always have fun? And, of course, any that ALWAYS suck. A bit…
The tour's been wicked so far. We're currently in Leicester using all of Tired Irie's facilities and playing Puzzle Fighter 2 on the PlayStation. There's always good and bad shows, but it's nice when places like Welwyn Garden City turn out to be absolutely amazing and you get to do an encore(!?).

Certain members are quite young - I don't know how old exactly, but I.D. must occasionally be requested? Ever experienced any problems playing shows because of this?
Adam and Eve are the youngest (20 and 21), and they get asked for I.D. EVERYWHERE. It's so ridiculous when we're onstage soundchecking and then have to go out to the van to get I.D. for tap water! This actually happened yesterday. So we smashed the joint up and hit the barwoman in the jaw.

You're now part of the BSM stable - what attracted you to the label?
We've been fans of BSM for ages. Jeniferever’s Iris (review) is one the best EPs I've ever heard, so as soon as Kev (Douch, BSM head-honcho) mentioned he'd like to work with us we were flattered to be involved with a label who had already put out such great stuff.

Future plans, for the rest of 2007 and beyond? Album proper, soon?
Well, we've just recorded a Radio 1 session for Huw Stephens which is going to be aired on October 4, so we're major excited about that. Album proper... in about a year! We've just started writing it, but it's going to take bloody ages. We've decided to make up a set of Dogme style rules to govern the writing of the album and restrict us to certain song lengths, key signatures, instruments, languages et cetera. We'll finalise the list sometime soon and probably even ask for other people to think of some rules. I guess that means it'll be a concept album, but not a proper eggy one.

Catsx3’s split LP with This Town Needs Guns is out now on BSM. Information and songs available on MySpace. Forthcoming shows: