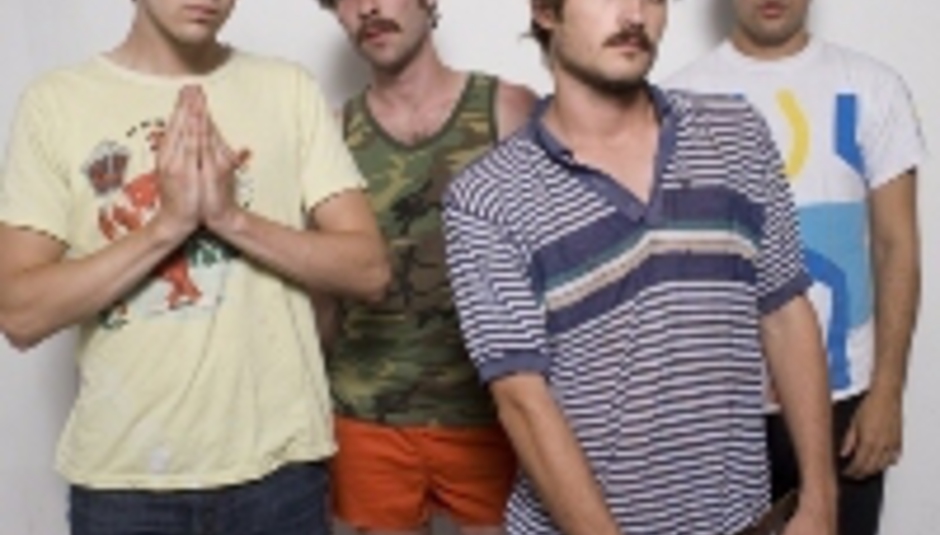 They came, they wiggled, they slayed. To firm the ground ahead of the impact of their fourth studio album – and first official UK long-player – Good Bad Not Evil, Atlanta’s Black Lips hopped into a stinkin’ van and wound their way around the wiry blues and yellows of AA’s motorist’s guide to the UK. They played some shows, hung out a bit, and let certain bits hang right out. Chaos, fun, dribble and spit, and some punk rock: all adds up to a grand time.

The four-piece - Cole Alexander, Jared Swilley, Joe Bradley and Ian St. Pe – will soon be back in the UK to play ATP’s Release The Bats show, at London’s Forum, on November 2; they’re but part of a great bill featuring Liars, Deerhoof, Deerhunter and Fuck Buttons. Details available at the ATP site. For news of other future shows, keep an eye on their MySpace.

But, back to their recently wrapped-up tour: Cole Alexander kindly kept a diary of proceedings, and here DiS is dead pleased to present them for your reading. Enjoy, and do try not to spit any tea on your keyboard.

Thursday August 30, Manchester
Manchester… We got robbed here the last time, so we were all on the defensive. But as the crowd let loose we let our guard down and had a blast. I drank Campari over foosball.

Friday August 31, Nottingham
Oh, where do I begin? Nottingham is home to all the really hot black chicks. Atlanta’s got a lot, so it’s hard to compete… But man oh mighty, did our hearts sink at the sight of such dark beauty.

Saturday September 1, Leeds
Ah, the ketamine makes felion (?) like quality’s shine in the pit big bundles of nerves slamming together in violent motions like it’s so romantic the night away. (No, me neither – Ed)

Sunday September 2, Glasgow
I can’t understand people when they talk here. I feel so stupid, ‘cause I do speak English, I promise. Mine is probably bastardized as well, but these niche dialects have so much character and every inflection from a feminine seems so much more bubbly, kind of. I guess I’ll just have to get used to it. Oh, yeah, we tried some poppers with the kids and then me and Ian got huge headaches. I couldn’t stop laughing – it feels wrong. And that’s why it feels so right! Who wants to live forever… there can only be one.

Monday September 3, York
Probably our most chilled show, but I ended up meeting a man who talks with ghosts. He does tours and showed me the grave of some guy named Richard who stole horses in the eighteen-hundreds. They called him the highway man. I got drunk and pissed on his grave. Poetic justice for a man who was hung from the gallows, man!

Tuesday September 4, London
(White Heat, review)
Ah, where the hipsters reside and it feels like an old Chinese restaurant in there. Ferris from The Horrors DJ'ed, and he played the most awesomest girl groups from the ‘60s, not like that Pipettes bullshit, but the real shit. I’d still fuck that one Pipette, though.

Wednesday September 5, London
(Rough Trade East in-store)
Rough Trade was awesome – it seemed like a place where people really care about music, and hot French girls were there. They also played the first Parliament record for us. It was awesome. I recommend the store to anyone.

Thursday September 6, Oxford
The club sucked, it was so bad. I can’t remember its name. Ian got kicked out ‘cause he made a waterfall of beer going down the stairs. If we weren't so shrimpish we could have disputed the bouncer. In the next life.

Friday September 7, Brighton
Brighton was fun. We ate fish ‘n’ chips with some UK management who said they wanted to work with us, and that made us really excited ‘cause honestly - between you and me - we could use some help out yonder, there in England. We need a pelvic-esque push for all you bedlamites. We love you, ‘til next time…

Black Lips’ Good Bad Not Evil album is out now on Vice, and is reviewed here. The band’s MySpace site can be found here.