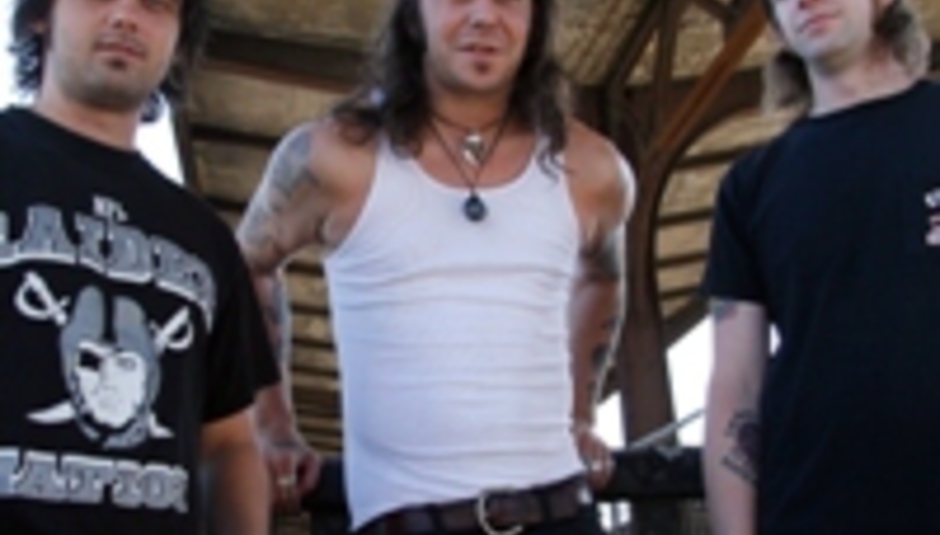 High On Fire: "high on bloody everything"

High On Fire: "high on bloody everything"

Trust our own Raziq Rauf to cut through the crap and find the point at its sharpest, commenting after a recent live performance in London: “High On Fire? We leave the Underworld high on bloody everything. This is what heavy music was made for.”

The heavy metallers have, to date, released three albums; their fourth, the excellently titled Death Is This Communion, is issued forth via Relapse on September 24. Based in California, the three-piece began life as a duo back in 1998, when former Sleep member Matt Pike joined forces with drummer Des Kensal; their debut album, The Art Of Self Defense, was released in 2000 and followed promptly by a second long-player, Surrounded By Thieves, in 2002. Then, change.

The band signed with Relapse and their third album, Blessed Black Wings (reviewed here), was released in 2005. Produced by the legendary Steve Albini, it opened further doors for the trio – at this point Thrones’ Joe Preston (ex-Melvins, also) was on bass duties – and they headlined the Supersonic Festival, above Isis, in the summer of 2006. Live shows became must-see events for any self-respecting metal-head, and even those not enthralled by super-amplified thrash stylings on a regular basis found aspects of the band’s full-on assault devilishly appealing.

Death Is This Communion looks certain to attract the band – now with Jeff Matz, formerly of Zeke, on bass – further followers, especially given the widespread acceptance of similarly challenging and boisterously brutal acts such as Mastodon and the reinvigorated Machine Head. DiS caught up with the three-piece ahead of that quote-prompting live show at London’s Underworld at another of Camden’s more r ‘n’ r boozers, The Enterprise.

Death Is This Communion is out a little later this month, but it has already leaked onto the internet. Is this something that bothers you at all, or is that simply part of the process these days?

Matt Pike: It just happens, and that’s the thing that does suck about the internet. I dunno – I just hope that people that download it go out and buy it, too, because that’s why we put so much effort into making cool artwork. That should make it almost worth buying alone.

So you’re not really into downloading at all?

MP: I’m kind of a technophobe – I hate even e-mailing people, and I think computers are fucking lame. I don’t think there’s any way around piracy, though; I’m just glad that our album hasn’t been leaked until very close to its release date. Otherwise everyone in the world could have it right now.

You’re playing with Russian Circles on a few UK dates here, and will then be playing with Mono in the US – is it cool to play with instrumental bands, as it opens High On Fire up to new audiences? Or are you not so into playing for beard-strokey people?

MP: Beard-strokey people? Ha ha… No, but it’s a weird anomaly that everyone we’ve played with recently is an instrumental band. It’s kind of strange. We’ve played with Pelican, too. I don’t know what that’s all about.

Pelican too? And now they’re quite the big deal, really. I guess playing with a band like that would see you performing before new faces…

MP: I guess we do play to new faces. Like, the Pelican dates were a long time ago, and I guess they’re bigger now. As long as the support acts are good, I don’t really care what sort of band they are. I’m kinda competitive, so I like having a fire lit under my ass by a band that’s really kick-ass. Russian Circles are cool, but it’s soundtrack music. I mean, I like soundtrack music!

Death Is This Communion followed in the tradition of its immediate predecessor in so much as it’s produced by a real name of the trade, Jack Endino. What did he bring to the experience that perhaps Albini didn’t?

Jeff Matz: Well, I wasn’t around for the last album, but from what I can gather Jack had more of a say in things, and got more of a performance out of us, than Steve did.
Des Kensal: We definitely received more feedback this time.
MP: I think we allowed ourselves more freedom this time, too. We could be more experimental with the stuff we were writing, and Jeff came in and was involved in the writing process. Last time, Joe Preston didn’t come in ‘til the whole album was written, already.

Joe was your third bassist, is that right?

MP: We’ve had three (Wikipedia would have you believe four – Ed). It changes us, for sure – every different bassist has brought their own unique style to the band. Jeff, generally, plays the older material the same…
JM: I try to remain true to the original performances, and not change the feel of the songs too much.

But now you’re a tight unit again? A proper trio?

MP: I feel that we’re very much a unit again, for sure. Joe was so good – he just came in and started playing, and nailed the pieces straight away by following my guitar lines – but now we’re solid. Joe didn’t have a whole lot of time to write, but Jeff and Des and I have been working away for months and months on new music, putting the whole puzzle together in a way that all three of us could look at it, like it was on a white board. We could trip out on it ‘til it worked right.

Next year will mark the tenth anniversary of High On Fire, right?

And do you expect your profile to keep growing, in a similar vein to Mastodon, for example?

MP: The way Mastodon went about raising their profile, hopping on this tour, then that tour, then a Slayer tour – that’ll raise your profile quicker! But sure I think we hope that our appeal continues to broaden. Good music is good music regardless of what category you choose to put it in. We try to make our music as appealing as possible, and as heavy as possible. If we make ourselves happy, playing together, and the music’s interesting to play, then other people can see us smiling when we’re playing and they feed off that. You feed off each other, really.

So you set out to slay your crowd, night in night out…

MP: Like I said, I’m pretty competitive. We go out there wanting to make everyone’s jaw drop onto the floor, and I think we present a better stage show than a band who, say, put all of their efforts into masks or something. Maybe they’re more theatrical, but we invest our time into being seriously good players, and performing the best we can live.

So even now, after so long together – you and Des, anyway – you’re still rehearsing as much as possible, with the live shows always in mind?

MP: We rehearse pretty much five days a week, or at least we try to. Every now and then we’ll actually have a break – usually after a long, fucking tedious trip where I’m like, “I’ve gotta get the fuck outta here”. Homesickness hits randomly – it happens quite often, because your job is travelling. All you want to do sometimes is hide in your room, or hang out with your girlfriend or wife.

All that travel will seem appealing to up-and-coming acts, but I guess you’ve seen the darker side of touring enough times. Just how much do you get to see of places you’re playing, from a ‘tourist’ point of view?

MP: We sometimes get to see places – it depends where we’re at and how much time there is. Also, how much will you’ve got, and how much you’ve slept. If you didn’t sleep much, you won’t get up early and go exploring, or sight-seeing.

And this is just a short stop in the UK, right? You’ll be back later in the year?

DK: We’re going to Europe after this, for another five or six shows, and then five weeks back home. Solid touring, yep… and then some weeks off and back here!

Five weeks around the US sounds like a proper slog…

MP: We’re from the US so touring it isn’t so frightening. The 24-hour drives still suck, though! You can pay 40 grand for a nice bus and tour in comfort, or be uncomfortable and come home with some money. It’s not for everyone, the touring life – it takes a special kind of someone who can deal with all the crap that comes with it, and who can deal with being deprived of certain things for a prolonged period. Promoters letting us down? That usually happens to us over here! Although this time’s been fine. In the past we’ve had, like a 12-pack of warm beer and no towels. And the promoter isn’t even there, so you don’t know if you’re going to get paid. That sucks.

And this trip, have the new songs been going down well?

DK: Well, this trip is mainly to hype the record and do press, and then when we come back we’re hoping people will know the songs. This time out the crowds have stood there and soaked stuff in, and have come up to us afterwards and told us the new stuff is great. When you’re playing it can be tough to judge what people think, but then again it’s not like they’ve heard it before.
JM: That happens any time you play new material, though, and with any band I’m sure.
MP: We’ve had a better reaction to the new songs off this album than we had to the then-new songs off the last album, and the album before that. This time out the crowd is actually reacting – visually – to the new material.
DK: I think they’re just psyched to see us. This feels like the first trip here where that’s happened.
MP: We definitely feel that we have proper fans here now. Those that make the effort to travel to see us. But then again, to us, anything less than 24 hours in a van is heaven. It’s like, “Cool, that was quick bro.”

One final topic to touch upon – British food. A lot of US acts moan about it…

MP: I stick to the kebabs. I like the Turkish places. A proper English breakfast usually makes me sick.
DK: Some places we get a proper home-cooked meal, which is awesome, but later when we get the post-gig munchies, you gotta go to some service station…
JM: …And get some Ginsters.
Hey, don’t badmouth Ginsters, the saviour snacks of the road…
MP: Aw, dude. You eat that and you wake up and your farts smell like a sewer. There’s far better stuff in the US, as far as on-the-road crap goes.

With all assembled bemoaning the lack of quality service station foodstuff, drinks are finished and the band head eastwards for a magazine photo shoot, where they’ll be faux-bloodied up and let loose in a church with a few chainsaws. Sure, that might sound suitably, well, metal, but the amiable trio don’t exactly wear their influences so broadly upon their sleeves. Discounting tattoos, obviously. By the looks on their faces as we part company, it’s quite apparent that High On Fire would rather be doing next to anything than prancing about for a silly photographer full of misconceptions, and we’re willing to bet that includes taking a 24-hour ride to some motorway services.