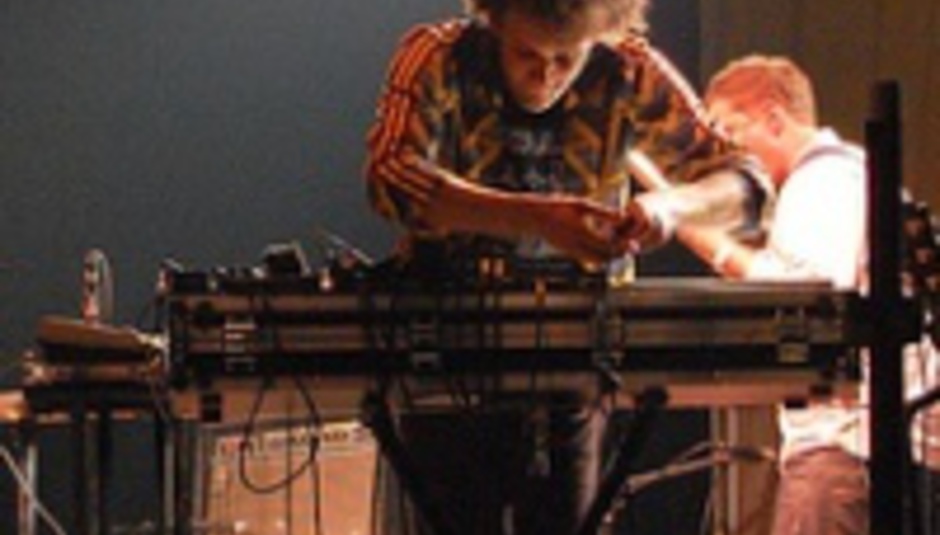 by A bunch of drunk DiS writers March 3rd, 2009
and jonathan fisher

All words by Jane Oriel, Sam Lewis and Daniel Ross.

There’s something beautiful about the Green Man Festival, stowed away as it is on a Welsh hillside, children and soap bubbles flitting everywhere as sheep wander the fields behind the main stage. It also has the best festival food, bar none.

Friday gets off to a pleasantly pedestrian start with acoustic folk lovelies Gwildor, which is nice and all, but nothing compared to the pop might and lush power of Fanfarlo. David Bowie’s dead right naming them as one of his favourite new bands. The likes of 'Fire Escape' and '…Outsiders' separate them out as being something rather special, and their Arcade Fire gets beaten by Brian Wilson act is going down rather well, thanks.

A little later, sounds of traditional folk melodies with percussive clog dancing drifts from the main stage as DiS rests on the banking, watching clouds and flying ducks as we let the Green Man vibe reset our stress meters. Rachel Unthank and the Winterset are the source, then followed by Euros Childs, who puts the 'funny' back into folk (it needed doing). His voice - and the appearance of his band - is still that of a 12-year-old, and they are easily entertaining, crashing through about a thousand brilliant songs in five minutes. The highlight is the drop-your-cloudy-cider-and-half-eaten-paella beauty of 'Blaidd Tu Fas Y Drwys', which must impossible to improve upon, surely. It doesn’t stop Dead Meadow trying it on the other stage, but it's not enough – their blind faith in the 1970s is endearing, but ultimately a little sticky. Nice dynamic control, though. A more ponderous experience is King Creosote. Kenny Anderson’s mossy voice sums up much of Scotland’s densely woven musical heritage but nicely coiled around current concerns.

Bill Callahan takes to the main stage, and his voice has a calming, prophetic quality about it; deep and voluminous, profound and mature. His set draws heavily from 2005’s A River Ain’t Too Much To Love, and when he delves elsewhere it’s towards tracks equally contemplative, such as the sweetly poignant ‘River Guard’ from Knock Knock. Callahan’s lover Joanna Newsom follows, and there’s a lot to take in. Bestride her harp, she’s eye catching in hot-pants and robed by tumbling blonde hair. (Is it just me, or does she look like Jodie Marsh here? – Ed) Her speaking voice has a bell-like chime to it, which twinned with her otherness, has DiS entranced from the start. Her voice cries and leaps but without affectation and her lyrical stories drop either from the lips of a seven-year-old child or a 70-year-old woman. Joanna Newsom is a musical treasure, and you heard it here... last.

Saturday brings a host of superb acts, starting at a tiny open air tent called the Green Man Café stage. Christopher Rees is in high spirits and he and his band rip through some rousing bourbon ballads from his new album Cautionary Tales. Both Emmy the Great and Diane Cluck tend to be loosely grouped together in the vague ‘anti-folk’ category, but in truth Emmy’s songs are too well structured and Diane’s too freeform for that profile to stick to either. Emmy lifts a sodden crowd with inoffensive, bittersweet love songs and, later, Diane enraptures the audience with a performance that’s controlled, emotional and genuinely moving throughout – a real highlight.

Meanwhile, Ben Chasny’s Six Organs Of Admittance, are tearing it up on the Folkey Dokey, now fast becoming dubbed the Fucky Ducky stage due to the expanding quagmire surrounding it. They mix beautifully low-key material from School Of The Flower with newer, heavier stuff that’s almost gothic psych-rock. It’s occasionally oblique but never less than fascinating. North Sea Radio Orchestra are of a different complexion. With bassoon counted amongst their ten-strong line up, they set the words of Yeats and Tennyson to modern pastoral chamber music and are utterly delightful. Clinic, however, are tight and frightening on the main stage, decked out in brown boiler suits and top hats. Smart. Following them is the rather sweet and slightly unhinged Broken Family Band, who manage to elicit sympathy and menace in equal measure, via their sing-a longs that you probably shouldn't sing along to.

Back to the meteorological safety of the very well-covered Folkey Dokey tent, and James Yorkston. Simply put, his songs are still some of the most beautiful written in Scotland, and he even treats us to a very scary and very noisy acid-flavoured wig-out at the set's summit. And speaking of noisy, a small technical hitch at the very climax of Fridge's set is the only thing stopping it from being completely satisfying.

It would appear that a lot of people have attended this festival for one reason: Battles. Despite the hype, the four-piece prove to be very good. The percussion is particularly outstanding but every member is a faultless technician in their own way, be it twiddling knobs or impersonating a vocoder on the buoyant 'Atlas'. Actually, it’s pretty fucking special. We go to bed impressed, wet, muddy, impressed, tired, hung over and impressed.

Arctic Circle are the opening act for Sunday’s Folkey Dokey stage and are the perfect perk for that inevitable Sunday morning grogginess. Like a more lo-fi Belle and Sebastian, or a slightly less up-tempo Bearsuit, they have an infectious charm. Directing Hand are an altogether different proposition. Alex Neilson’s freeform drumming mixed with Vinnie Blackwall’s squealed vocals make a challenging concoction of wild, daring music. You wonder where it’s going, or even what the idea is; but perhaps that’s missing the point. At the same time in the Literature Tent, Richmond Fontaine’s front man Willy Vlautin reads from his road movie novel, Motel Life. It’s peopled by the kinds of world-beaten but redemptive characters in bad situations that are often found in his songs. With a lump in our throats, DiS decides to buy this book.

On the Café Stage, David Thomas Broughton successfully walks the line between the unhinged and the brilliant, looping his way through an engrossing 25-minute set which typically balances the creative, funny and confrontational. Sucking a cut finger throughout, his voice (like a more ironical, and northern, Antony Hegarty) wavers and climbs, carrying tales of love and Gregg’s pasties. Then, in the most diverse shift of the weekend, it’s back to the main and Malcolm Middleton. Cheer up eh, fella? It's not all bad, is it? Oh, apparently it is, and all we've got to look forward to is Stella and fags on a Wednesday night until we die.

Fortunately, a much brighter Gruff Rhys is next, who enjoys himself massively by looping a toy keyboard, dressing like an airline pilot, killing a hijacker, calling himself _"SKYLOR!" _and generally being ace. It's a wonder he hasn't done anything wrong in his career yet. Time for something a bit more straightforward and Herman Dune are the providers. David-Ivar gives a live display showcasing what an awesome guitarist he is, something strangely underplayed on record. Bouncy, effortless and wonderfully exuberant, Herman Dune are everything the strangely disconnected Devendra Banhart isn’t, leading us nicely towards the festival closer, Stephen Malkmus & The Jicks. What better way to finish the whole weekend than Malkmus guiding us through his indigenous and organic song writing in this most indigenous and organic of areas. A pretty and perfectly noisy way to finish a rather rewarding festival.