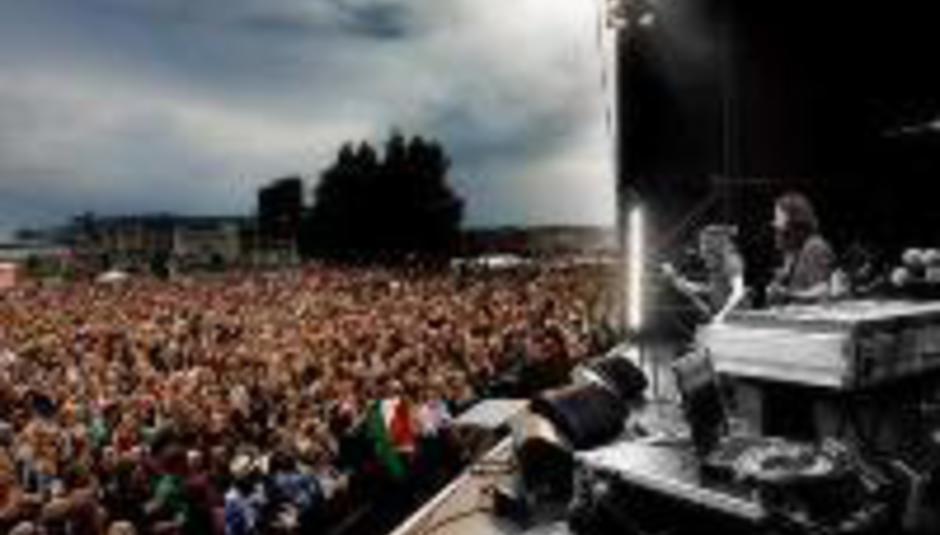 Øya Festival 2007: the DiS verdict

Øya Festival 2007: the DiS verdict

Øya is most unlike any British festival. It has a middling crowd where no-one seems high, and no-one seems particularly low. Neither rubbish nor last night’s wasted corpses litter the floor. Everyone is clean, everyone is polite. Even the portaloos are strangely welcoming. And the natives are uniformly, genetically beautiful. It’s the big, icy blue eyes which strike through you... Anyway, no use crying over unspilt milk. To the music!

Al: The Lionheart Brothers fight the Norwegian corner of the bill in fine style - hardly knockout stuff, perhaps, but their Beach Boys harmony pop sounds more wiggy than on record, suffused with the insistent, druggy drone of a Flaming Lips or a Spiritualized, albeit with a pair of frontmen more accurately resembling Jack Sparrow and Crispin Mills. If they could use a little more focus, they are at least a more serious proposition than festival openers Bare Egil Band, a comedy metal band featuring a beardy man in cycling gear and more left turns than a socialist workers party recruitment drive, and about as many laughs.

Tom: It’s early and still comparatively empty, but Boredoms’ stage set-up means they have to play first. Four drummers play treadmill rhythms, running on a loop to nowhere. All you can do is try to fall in time with the beat before it falls out of time with you. If you can, they reveal a strange, hidden melodies in taut skin, and it’s one joyous ride. Otherwise it’s one giant headfuck. And just to confuse matters, one drummer is hitting a drum made out of tuned guitar frets. Conceptual genius. DiS struggles to get anywhere near Matt and Kim, such are the massed ranks. Stood almost parallel to the stage the sound relays off the opposite breeze blocks of the motorway system and back in waves of discordant, dubby echos. The afternoon is hereafter spent lamenting Amy Winehouse. It may have been nothing more than a drawn-out charade, but DiS was genuinely disappointed. You can’t even argue with the term “nervous exhaustion”; the connotations are too obvious, too self-deprecating to complain about shaded truths. It may be hard to read literally, but Amy, please, get well soon…

Al: Watching Bonde Do Role caper about the stage DiS is reminded of nothing so bizarre as Chumbawumba. Their dumbass samples make them the baile funk wedding party band, and although strictly speaking we can’t decipher the Portugese-sung lyrics, we are reliably informed that most are cheerfully scatalogical of theme. This much figures: they have the gleeful air of children who have failed to progress beyond the anal stage in their development, and while they might be proud of their doings, the rest of us just have to smile patiently and remind ourselves that it’s only a phase. Never had much time for Nine Inch Nails, personally, always having thought of them as subverting industrial’s alienated tendencies for their own whiny American needs, but their set tonight is admittedly effective, hitting all the right peaks and troughs, with an impressive light show that has them disappearing among giant swathes of television static.

Tom: Opposite the main stage, about 500 ticketless fans have gathered on the hard shoulder of a high-rise motorway bypass. With certain death by car or concrete metres either side of their tenuous position, they stand like frozen lemmings. If nothing else, Nine Inch Nails are entertaining and make for an elaborate rock pantomime.The midset synth concession sees Reznor illuminated stage centre, his outline and features barely visible through a wall of static between stage and crowd. Ugly flashes of the front rows soil the big screen backdrop; piercings, acne and grease wheeze through the lowlights. With the barriers between crowd and rock star firmly in place, it’s a case of here be beauty, there be fans.

And as such, this is diverting but not involving. Which kinda renders the music itself irrelevant ‘Hurt’ is beautiful though, the final heroic chords fading like rushing water to rocks. And with the audience hushed and stunned, exit Nine Inch Nails. Thus spake Trent Reznor.

Tom: Gogol Bordello’s gypsy punk theatrics are perfect for easing hangovers, if only to try and work out if the lead singer wants to be Shane Macgowan or Joe Strummer more. Eagles of Death Metal, meanwhile, are nothing more than scummy retro-misogynists. Despite he from QOTSA not performing, they’re far from homme-less. We choke on second-hand adrenaline, the tunes die on our ears like whelping salted slugs. Yuk.

The oestrogen was welcomed, but New Young Pony Club fell on deaf feet. Their sheened nu-funk should make perfect sense in a carefree field, but it’s almost as if there’s an invisible film. Energy is lost, diffused, somewhere between the stage and crowd.

Al: I’ve tried, really I have, but I really can’t see the point of Cocorosie. Theirs is a flaccid, mimsical vision overflowing with bourgeois received wisdom about the wonder of childhood, and their über-bohemian air of artistic entitlement grates beyond belief. This is potentially thin ice to skate on from a critical perspective when the likes of Bjork and Devendra Banhart provide such attractive propositions in a similar vein, but where the latter pair are endearingly quixotic, Cocorosie merely seem precious and indulgent.

Malajube, on the other hand, sound like a band with greatness well within their grasp; laden with hooks and equally adept, it would seem, at impersonating an overamped Broken Social Scene as they are echoing the splendiferous overreach of Muse’s gothier moments, only these guys are less twatty ‘cos you can’t tell if he’s singing about sci-fi in his native Canadian French. Justice’s daft punk-y house whips round the Sjosden stadium with vicious aplomb, stirring even this most placidly Scandinavian of crowds into a comparative dancing frenzy, but in spite of Tahita Bulmer’s best contortions, New Young Pony Club seem too cool and contrived a proposition to really engage with their audience.

Tom: The news that Lily Allen has dropped out is numbed by burnt-out synapses and residual alcohol floating around our nervous systems. There’ll be no pop nourishment to combat the inevitable hangover munchies, that’s for sure.

Al: Even more so than on record, Battles are a marvellous thing. Stripped of the tech-y ‘80s sheen of the last record, they simply rock. Tyondai Braxton sings his unintelligible vocal parts with such conviction you forget why they made you giggle first time around. ’Atlas’, of course, is the brainiac glitter stomp that suckers everyone in; the rushing release to ’Race In’’s brilliant evocation of tension and flux, Ian William’s looped guitar notes proliferating like germs under the microscope. It’s just one of the myriad weird symmetries that make Battles so exciting right now, an infinitely regressing, binary holler somewhere at the interstices of mechanical and digital worlds.

Material previewed from Devendra Banhart’s forthcoming album Smokey Rolls Down Thunder Canyon is showcased to varying effect during a performance interrupted by a warbling scandinavian bloke invited onstage mid-set - ’Seahorse’ is a slightly solemn, extended jam which suggested real repth and understated power, but another, apparently untested song comes over a little goofy; a foamy, surf-tinged samba that slides off the consciousness even as it entertains. Tom: ...Trail Of The Dead are off form. Although they’re beginning to favour melody over pure aggression on record, DiS still expected a chaotic set. But the energy was compromised for tunes which were all but lost on the breeze, when all we wanted was them rammed in our ears…

Congratulations to Cheeseburger, the worst band at the festival. Leaving the site meant a wade through their audio cesspit, probably to prevent chancers popping through the open gates.

The Jesus & Mary Chain were an undoubted highlight of the festival. Watching them twenty-odd years into their careers as seminal purveyors of noise-pop genius, it’s remarkable to observe how unnatural they still seem as performers. It’s all part of the appeal, of course; that starchy unmusicality lending their perfect pop songs a veneer of ineffable cool that’s not likely to desert them any time in the near future.

Tom: DiS’ mental state is slowly crumbling. The pines are slowly becoming leering green pins pricking our eyes, and the lake one ever-encroaching mass of silver. In this context of mental unraveling, The Besnard Lakes are meanderers. Their songs regurgitate rather than thrust, a cascade of stodgy classic-rock too contrived to sound exciting.

Tom: The Go! Team are miraculous, so energetic it’s unbelievable. In fact, it’s hard to keep up - for the first half it’s a gleeful, throwaway racket, perfect 7pm festival nonsense. Everyone jumps and falls over in the right places and the tunes fly by like high speed ice-cream vans. But by the second half it begins to grate, like a tapping foot on the tube.

Al: Four days is a long time in festival terms, and like the sunless days that envelop the north of the country during the winter, it helps if there’s a bottle handy to steel yourself for its lingering embrace. Still, eternal night is being a bit rough on this particular bash, which has enjoyed more than its fair share of (surprisingly fierce) sunshine, and my half-cut compadre and I saunter off to the Sjøsden stage, where things are shaping up very nicely indeed… White rappers often make critics go all self-reflexive and awkward – and that’s disregarding the whole contentious chav issue here – so let’s just go with the flow for once and say that Lady Sovereign was amazing; obnoxious and charming in equal measure, but much more so than on record, just plain vital. The self-professed midget in the game already has the approval of Jay-Z and Missy Elliott, but let’s hope she doesn’t stray too far into American-influenced waters – it’s the dubbier, grimier tracks here that better showcase her abrasive skills as an MC, which occasionally border on an unexpectedly ragga-like rasp. The English-speaking contingent in the audience is visibly agog at her raucous banter, half suspecting her non-existent self-censorship skills will lead her to say something unforgivable.Thankfully she’s brilliant throughout, taking time out to remark, among other casual observations, how clapping sounds like someone pissing on a crisp packet.

Primal Scream remain a mystery to me. Mirroring their recorded output perfectly, about three quarters of their set is terrible, recycled rock ‘n’ roll, one huge ego-fulfilling Stones pastiche. Bobby Gillespie stands motionless, save for skinny hip histrionics, stage centre. The lights flash but do not pulse, the songs frustrate and they begin to sound like a rock star retirement home. The remainder, ie everything from XTRMNTR, is honed genius. Everything falls into place perfectly; the sound of revolution rather than reaction.

With that, we’re off for one last night of debauchery in Norway’s castle. Well Tom is, anyway – I stay in at the hotel and get pissed with a painfully-acquired bottle of wine (don’t ask) and whatever else I can scavenge, before heading off to bed for a whole hour, adamant that this pathetic sliver of sleep will stand me in good stead for the imminent flight home. It doesn’t, of course. I am awoken by Tom, who had spent a lost couple of hours wandering clueless around Oslo before eventually stumbling upon our gaff again just in the nick of time. Dazed, blinking, and with monstrous hangovers looming large on the horizon, we make our hasty exit, rinsed of financial solvency but hopeful that Øya would have us back for a second bout next year...