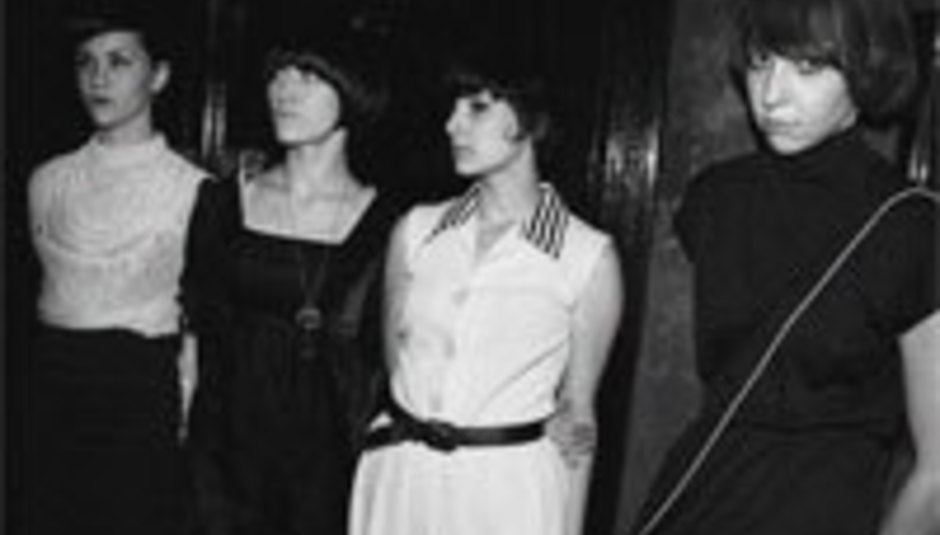 Ipso Facto play a monochrome psychedelica. Everything is taut black and white; guitars sound like they’re being played through straitjackets, the organ lines like slowly snapping ice. Though it’s something more than a Horrors-esque revivalism of dark garage-pop; Ipso Facto posses a cutting edge of melody and melancholy whilst most bands struggle with the crux of their own conviction. And as Paul Weller so correctly once said, “how can I be a revivalist when I’m only fuckin 17?”...

They’ve only played 4 gigs, but thanks to a handful of enchanting Garageband demos already have a two single deal with new label Disc.Error and a (kinda) London tour booked.

Anyway, standing outside Catch in the nearly rain with refugee smokers and interfering industry scum, this was never going to be the clearest interview; my dictaphone offers more muffled voices and Saturday night sirens than direct quotes. As this is their first press I have no presumptions; as this is their first interview they can have no pretensions. And as such this interview is not so much a transcription of what was said, but of their prevailing sentiment, which, let's face it, probably offers a more accurate picture of any band.

How did Ipso Facto form?
I (Rosalie) met Victoria at a bus stop. We started talking and I said I wanted a drummer, so she drummed on the bus stop window pane for me. We lived together in Holloway, but our house burnt down when she left the kettle on. Me and Sam have known each other for ages and I’ve known the other two for a long time...

Would you say you’re from Southend or London? The Southend scene has received lots of media attention…
Noooo! Rosalie is the only one from Southend. None of us are actually from London but we all live in London now. We’re a London band from all over the country… Cambridge, Newcastle, Southend. We’re just so British, really English!

So, what are Ipso Facto’s plans for the rest of 2007/2008?
Graduation! Then we want to headline a Bob Geldof charity gig… and then all have sex with Bob Geldof afterwards. Together. Seriously Bob - call me! My number is…

Seriously girls….?
Our first single is coming out in October on Disc.Error. We’ve haven’t chosen which song yet, it could be 'Little Puppet'. We’re gonna have a video as well.

Boring question I know, but a necessary one. Who would you cite as influences?
Can! Every time… I like tribal drums. Glen Miller. Captain Beefheart. The Stranglers. Sonic Youth.

You dress in vintage/retro clothes. Not that it matters particularly, but are you conscious of creating an image?
Well we’re not exactly vintage, I think it’s quite a conservative image. Yeah, it was an informed and important decision, but it wasn’t a "let's dress like this blah blah blah". We all dress up anyway, we just all happen to like pretty dresses. I mean, I’ve had this on all day. We go to the supermarket like this. I bathe in this!

Aptly, at this point an amateur photographer intervenes.

Anyway… what’s your approach to songwriting? Does everything come from Rosalie?
I wrote all the songs and recorded them on Garageband but didn’t have anything to do with them really. Then we got a band together. Now we’ve a base to write more varied songs and begin to adapt.

Do you think there is a danger people from outside London might perceive you as nothing more than a scene band? You’ve already played White Heat and have dates booked at most of the trendy nights…
No. We’re playing here so much and at those kind of gigs because they’re the only gigs we’ve been offered! To some extent any London band could be seen like that. We’re not particularly fashionable or sound like any of the other bands around London, so if anything it might be the opposite. I hope people are really open minded around the country, in London everyone is far more pretentious.

Would you like to recommend some other new bands?
No…. Can! Theoretical Girl, as we play in her backing band. Screaming Tea Party. Kap Bambino. The Guillotines - they’re amazing! And Acoustic Ladyland. Say them…