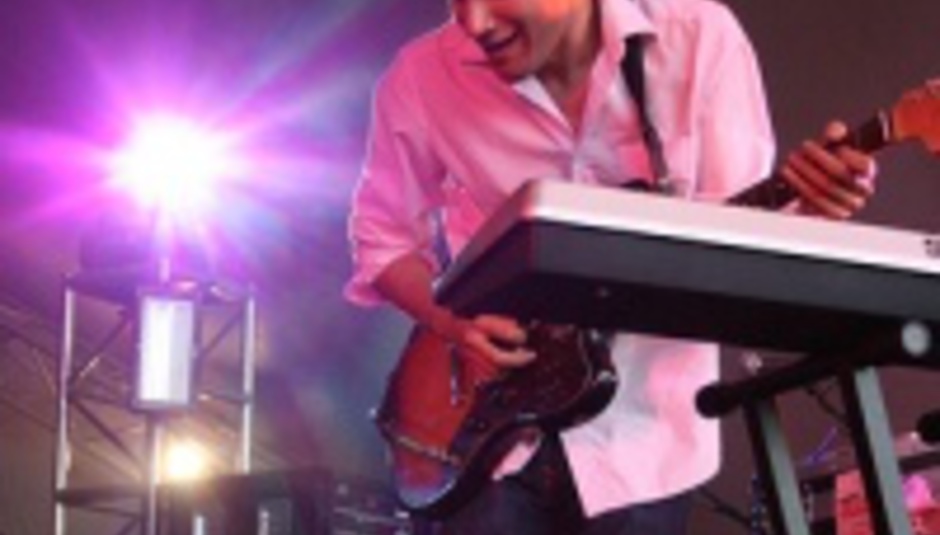 Field Day: the post-mortem has been hotly debated on the DiS boards and beyond – click here to add your own opinion on the mishandling of certain on-site facilities – but what’s important to not overlook is the quality of the line-up. Here, DiS focuses solely on exactly that, a key aspect of the event that should, save for a few flies in the overall ointment, have made the first-ever Field Day, held on August 11 at London’s Victoria Park, the all-dayer of this summer.

Arriving early to make the most of the eagerly awaited festivities, DiS edges right to the front of the (main) Eat Your Own Ears stage to catch the last part of Caribou’s set. Successfully walking the line between Dan Snaith’s shoegazing ways and his more psychedelic tendencies, it’s a blissful, sunny performance that serves as the perfect start to the day. The set culminates nicely with new album standout ‘Melody Day’, leaving DiS all smiles. Across the site at the Adventures in the Beetroot Field tent, something doesn’t appear to be working for The Strange Death of Liberal England. Whether it’s the setting, or they’re just having an off one, the band lack intensity and appear to be forcing their way through their usually epic posturing.

DiS bolts from Strange Death’s flailing, dashing over to the Homefires stage to catch some mid-afternoon folk. Laura Marling is already sounding like an accomplished chanteuse. Slicker solo than accompanied by her backing band, her well-crafted songs and emotive vocals manage to expose the likes of Kate and Lily as pure flash-in-the-pan amateurs. Shortly after, Devendra Banhart-collaborating American troubadours Vetiver lull us with charming summery folk ditties.

Fridge’s first live performance in five years fails, somewhat predictably given their archaic post-rock noodlings, to set pulses racing, although by this time temperatures are rising through frustration as much as anything else – the queues are beginning to snake out of control. Deep breath and a shady sit down – sounds from around the site melt into a liquid centre and the enveloping effect is both annoying from a clarity perspective and pleasurable from a WTF point of view. It’s like having a festival across a few adjoining back gardens, this. Best skip as close to the front as possible from now on. But Fridge: great band back when, and perfectly accomplished now, but… we want something a little more jolly.

Finding Lightspeed Champion playing an unannounced, not-far-from-busking set on the otherwise near-deserted Band Stand is one of the highlights of the day. With his acoustic guitar running through the factual smallest Marshall stack in history (one of these, here), a drummer, violinist and backing vocals from Emmy the Great, the highlights of his melodramatic pop folk set are a brace of Weezer covers and new single/future classic ‘Galaxy of the Lost’, all delivered with a lot more ‘authentic’ musicianship than you'd expect from an ex-Test Icicle.

With a professional-enough set by the always chirpy GoodBooks leaving us cold despite the scorching sun, DiS wanders the grounds awaiting a little inspiration. It doesn’t quite come from James Yorkston, whose muted folkisms over at Homefires are drowned out, rather, by the pulsing beats emanating from the nearby Bugged Out tent. The Concretes draw a sizeable crowd to the Beetroot Field tent, and their feel-good melodies gets agitated souls seeing the bright side once more. Forget that hour-queue for a pint, kids: get down the front and bop-hop on one foot to some luscious Swedish pop. Back to Bugged Out, and Chromeo are everything you'd hope for them to be. If their Hall-and-Oates-on-heat shtick doesn't do anything for you on record, then this'd likely be excruciating. If, however, flying Vs, slap bass and vocoders have a special place in your heart, this is where the party starts. It’s just two guys jerking around over a backing tape, but with enough charisma to make you feel like an extra in a living, breathing episode of Miami Vice. Which is basically what live music should be about, isn't it?

Wandering over to Bloggers Delight’s (literally) tiny disco, DiS stumbles across Our Disco’s Nadia Ksaiba spinning a choice selection of post-disco-punk-house etc, including Hot Chip’s ace remix of Junior Boys’ ‘In the Morning’. It’s a fairly odd setting for forward-thinking dance tunes, but that doesn’t stop the micro tent from filling up with afternoon gurners. Meanwhile, on the main stage, something a little jerking this way comes…

Leave it to Foals to inject some excitement into EYOE stage proceedings, after a meh set from The Aliens. Their dance-fuelled yelps, shouts and agit-rock have a potent effect on the sun-worshippers, because they’re suddenly off the ground en masse and paying close attention to Yannis and his avant-pop crew’s onstage antics. Having only recently returned from the New York studios of Dave Sitek, with newly recorded debut album under their collective arm, the quintet flail around the stage looking like they want to physically take out one of the 20 photographers in front of them; their songs, each superbly tight, appear to blend into one. Some might see this as a failing – are Foals a one-trick pony? (Please pardon the pun) – but today their set is an obvious highlight. It’s delightful, and great fun – leave the scepticism to one side for the time being, at least until the album drops next year.

Interval, and a little female input into proceedings: critical darlings and rightfully so, the four ladies of Electrelane prove once again why they still matter four albums down the line. Playing highlights from the likes of The Power Out and this year’s No Shout, No Calls collection, their wall of sound and Glenn Branca meets Stereolab guitar skronk leaves more than one person shouting for more by the end of their brief set on the Beetroot Field stage. Adem’s sing-along strum-pop is followed on the Homefires stage by another of the day’s success stories: Archie Bronson Outfit. The Cardinal and his cohort reiterate the opportunity the festival environment provides for an act like them, one that has undeservedly escaped underappreciated off the back of such a remarkable record as Derdang Derdang. Come the close of events their name seems to be mentioned in every passing conversation as truly proving their worth, despite the plug being pulled on them for peddling such metaphorical filth (and the fact they exceeded the sound limits), with onlookers content that these gentlemen deserve a full outing to do them justice. A change of musical tact: in his current incarnation, Matthew Dear - perhaps better known as remixer and electro producer Audion - fronts a semi-live band, Big Hands. He's bound to attract comparisons to James Murphy and LCD Soundsystem, but his is a sleeker, more minimal sound, and his onstage charisma more traditionally charming. He attracts a decent crowd to the Beetroot Field stage, but is unfortunately pitched into direct competition with one of the day’s biggest attractions: Battles.

So, back to the main stage. Peering over the plethora of tangled wires we’re not quite sure whether we’re watching a dance act or an indie band up there; to DiS’s right, some fashionista attendees snort coke from the back of a credit card, expecting the next half-hour to relive them from their minds. But, while we have much love for Battles, today they’re flattened by poor sound. The likes of ‘Tras’ and ’Atlas’ screw with your head in all the right ways, but with the band obviously unsettled by on-stage short-circuitings, their delivery is half as frenetic as what it usually is. With the crowd protesting for the sound to be raised, the thundering drums of ‘Atlas’ - eagerly received by the audience who respond with a sea of arms pumping the air and leaping in time to drummer John Stainer’s heavy drumbeats - send those close enough to hear properly skipping away gleefully. All minds, firmly intact this time out. The freshly-streamlined Mystery Jets use their main stage platform to run through hits past and future – ‘Zootime’ (probably one of the most fucked up and unique debut singles of any top 20 band in history) and the like reminding us why we loved them so much in the first place; two new offerings whet the appetite for the Erol Alkan-helmed second album. One, ‘Hideaway’, is propulsive, dancey synth rock that will doubtless attract the N* R*** label at some point. The other, ‘Flakes’, is a powerfully mesmerising ballad, certain to become one of their best-loved songs. Over on the Beetroot Field stage, Late Of The Pier sound like they’re making a good noise from outside of the packed tent. They certainly draw an impressive crowd.

With feathers spat at the tailback reaming from any stall to satisfy swallow or sip desires, under circus-top pretence Angus Andrew is found conducting himself as ringmaster for the evening, irking gestures silencing discontent caused by their lack of punctuality as Parisian beatniks Justice’s splintered drones echo from across the park. Despite the soft whines there is a menacing brutality to it all. ‘Plaster Casts Of Everything’ rips in like a conventional nuisance after ‘Be Quiet Mt Heart Attack’ opens Liars’ set – on a now-rammed Beetroot Field stage – with solemn grace. After sound troubles spoilt their recent showcase show at White Heat with melody drowned in an overbearingly grating distortion, this evening – again with a fourth affiliate joining proceedings – is for most the first opportunity to see how their set is a finely formed beast comprised of equal parts noisenik obscurities and popular melodrama. They truly are the highlight of the day, relentless and ferociously able to get the crowd jumping like a bunch of drug-addled ravers at a twisted warehouse party. Andrews, looking like some art-rock preacher man in an all-white suit, leads the band and the audience through a blistering set. Exhilarating to watch, they tick off every box defining what a band should be and create a few new boxes of their own along the way. Positively essential.

While Four Tet brings Homefires to a close after a pair of well-attened sets from Mercury nominees Bat For Lashes and a Super Furries-stripped Gruff Rhys, it’s left to French electro-house duo Justice to top the main stage bill. While the intricacies of their recent Cross album are lost on a post-Liars swarm with cloth-eared reception, those venturing up front and personal find themselves instantly engrossed. They save their best ‘til last as a re-working of their mahoosive remix ‘We Are Your Friends’ is eased out for all to thrust their glow sticks in the air to. Hearing the likes of ‘Waters Of Nazereth’ fairly loud in a field full of people is pretty ace, but overall the pair fail to live up to previously witnessed performances, their Field Day-ending set hardly doing their recorded output justice. Ha! A pun…

And home. See you next year.