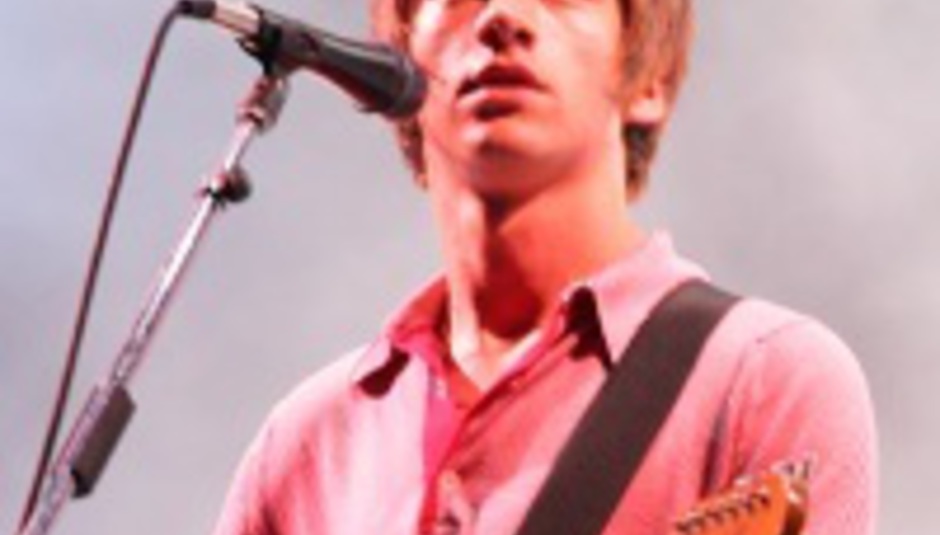 One of two annual mainstays of the Japanese festival season, SummerSonic is more of a Glastonbury-style event when compared to FujiRock's Reading and Leeds, and is split over a weekend between Tokyo and Osaka.

One hundred and twenty acts are crammed onto the six-stage site over the course of the weekend, with stages ranging from a baseball stadium to a beach to a gigantic air-conditioned exhibition hall housing the other four, which provides some welcome respite in a sweltering heat pushing 40 degrees.

The two days offer an intriguing if not mind-blowing line-up, balancing the likes of '07 festival troopers Arctic Monkeys and Manic Street Preachers with wildcards ranging from The Stranglers to the slightly bonkers Cyndi Lauper. It is at this point I should also mention that the eclectic two-day line-up, for some ungodly reason, includes a main stage headline slot for The Black Eyed Peas. Eurgh.

First up are The Horrors, who prove quite entertaining if more than a little gimmicky. It's a tricky early slot for them but, to their credit, they are quite energetic, although the unintelligible mumblings of Faris Badwan are lost on the Japanese audience (and me for that matter). The response to their campy goth-punk sound is pretty flat, only invoking anything approaching excitement with what Badwan acknowledges as "Good old Sheena" as ‘Sheena Is A Parasite’ closes their set. On the basis of this performance, it's hard to imagine them ever being much more than a bit of a novelty, and I can’t help but think it’s a bit too_ Rocky Horror Picture Show_.

An increasingly wrinkly Goo Goo Dolls are next on the main stage. A credible act way back when, they now simply seem to thrive on power ballads aplenty, grasping at any commercial straw they can get their hands on as their latest - "This one's from the _Transformers movie!"_ - attests. Not that there's anything wrong with a good slice of power balladry, but you can't help thinking that they will still just be belting out ‘Iris’ 20 years down the line. The question is whether or not anybody cares. Despite emphatically thrusting the microphone in the audience's face, it seems that very few people do care any more, and it's all a bit of a shame. Perhaps it's the slightly odd indoor stage, the lacklustre crowd or the fact that I personally hold Interpol up on a bit of a pedestal, but something about their set falls disappointingly flat. Technically and musically, it's hard to fault them – they are a class act and have been around long enough now to surely have the power to wow with a choice set. They just look like they are simply here going through the motions, making no attempt to throw in anything new, interact with the audience or – Christ – have some fun. Fortunately, Interpol's 'average' is still really rather good.

Now then, despite it being incredibly un-cool to like* Fall Out Boy*, I'm going to go out on a bit of a limb here. Credible (whatever that means) or not, they deftly mix catchy hooks with quick lyrics that get everyone bouncing around. For the first time today, it finally feels like we're at a festival. They are having fun up there and it's infectious. Cheeky dips in and out of both Michael Jackson's ‘Beat It’ and ‘Power Of Love’ by Huey Lewis & The News also suggest that they don't take themselves quite as seriously as everyone gives them so much stick for. Call it pop, call it emo, call it un-cool or whatever: it's a set full of good tunes and – crucially – a large spoonful of unpretentious fun.

Set of the day goes hands down to Modest Mouse. Despite a tendency towards the pretentious, they are veterans who manage to do what Interpol couldn't earlier today. Two drum kits, guitars, a cello, trumpet and accordion make for an entertaining 40 minutes. There's a bit of banter with the crowd, a bit of experimentation and a well-crafted set – a mixture of old and new. Great fun.

At headliner time, we shoot for Maximo Park with pretty high hopes which are instantly dashed. The Dance stage is less than a third full and Maximo Park fail to live up to what is some obvious potential. People leave in droves despite the somewhat desperate_ “this is the dance stage so… er… let's all dance…”_ plea. It's all quite embarrassing and leaves us a bit puzzled at where it all went so wrong.

Since I would rather eat my leg than witness a Black Eyed Peas set, we instead break away from Maximo Park to catch the second half of Sum 41. Since 2001's bit-of-fun-if-nothing-else All Killer No Filler, they have shown about as much musicianship as the squashed frog that Mr Avril Lavigne, Deryck Whibley, resembles. So it's no surprise that they are almost painfully awful. We practically run out the door as he launches into an emotionally scarring and wholly embarrassing Elvis impersonation. This is the stuff nightmares are made of. Horrible.

So, tragically, it falls to Travis to save the day’s headliners. To me, they epitomise the vanilla ice cream effect: sugary-sweet, reasonably pleasant every once in a while but ultimately bland and unadventurous. Their finale is almost too saccharine for words – the whole band huddles around a single microphone for a group hug and rendition of ‘Flowers In The Window’. It's actually quite difficult not to laugh. Not bad as such, just entirely predictable.

Day two begins with _OC_-favourites Rooney. Theirs is a sound favoured by Californian teenyboppers but, despite being given such an early billing and being a late addition to the line-up, they are welcomed by a crowd that swells considerably throughout their set. Maybe it's just the glorious sunshine affecting judgement, but Rooney look very comfortable on the stadium stage and their summery pop is just about right for the occasion. Artistically, they are not in danger of blowing anyone's mind, but as a bit of fun early in the day, they fit right in.

Next up are an astoundingly popular act, The Fratellis. Personally, they do very little for me but almost filling a baseball stadium early afternoon in Japan with but a single album to their name is quite a feat, so we stick around out of intrigue. The crowd goes suitably mental and they win over cynical doubters (me) with a great set.

Horrible scheduling pitches* Bloc Party, *Bright Eyes, Hot Chip and Jose Gonzalez on at the same time. Twenty minutes’ walk away from the other stages, logistics sends us Jose's way. He plays the beach stage which does what it says on the tin. Roughly 200 beach dwellers are lucky enough to witness an intimate set that provides festival set of goosebumps #1. ‘Crosses’ and material from Veneer are all incredibly tight and new tracks are debuted to unanimous approval. This guy can seriously play, demonstrating remarkable control and holding the audience by himself for much of the set. He is later joined by some bongos and a woman wielding a wood block, who joins him for the last few tracks. What on paper should have been a particularly bad move turns into something else altogether, as Gonzalez covers 80s-era Kylie Minogue. His rendition of ‘Hand On Your Heart’ is almost unrecognisable and delivered so earnestly that it manages to inject sentimentality into what is otherwise a slice of sugary pop cheese. This precedes a closing cover of Massive Attack's ‘Teardrop’ which is even more startling in its perfection. So simple, yet so affecting. Superb. Set of goosebumps #2 of the day comes immediately after and is something of a surprise courtesy of Manic Street Preachers. Something about the intro to ‘Everything Must Go’ tickles nostalgic neurons and reminds you just how good they once were. ‘You Love Us’, ‘Design For Life’ and a huge Richey Edwards-dedicated ‘Motorcycle Emptiness’ finale all still sound fresh. Thankfully, they know what the crowd wants to hear and tosh from their distinctly less-than-average 2000 to pre-2007 period is largely – and rightfully – ignored, although ‘Autumnsong’ from their latest sounds pretty much in tune with the Manics at their best. Good to see.

Back to the beach for Sean Lennon, who delivers a nice but ultimately distinctly average set. The atmosphere is perfect: his set is boosted by the stunning backdrop of a Tokyo skyline sunset and a rare sighting of a reddish-orange Mount Fuji and it is possibly this rather than the set itself that lifts it from being unremarkable to being very pleasant indeed. There is little that is distinctive about him as an artist other than the obvious, but he holds his own quite well. I have a bit of a problem with* Kasabian *– I just don't think they are as good as_ they _think they are. While it's true that there is a lack of rock 'n' roll behaviour amongst bands these days, Tom Meighan almost takes the swaggering Gallagher-wannabe arrogance a bit too far and it verges on the irritating. Sure, they've got some good tunes with corking basslines that work well in the stadium, but let's not get ahead of ourselves. They might well be great one day and good luck to them, but they are certainly not there just yet. The crowd has a bit of a bounce around and the stadium is flooded towards the end in preparation for the festival finale.

Arctic Monkeys' headline slots elsewhere have been subject to a bit of negative criticism, and phrases like ‘rabbits in headlights’ have been bandied about. I disagree. On the basis of this set, I'd say the positive hype is entirely justified. A nice little ditty rings out, the stadium is plunged into complete darkness and the jam-packed crowd goes absolutely crazy-bonkers. It takes a short while for us to twig, but that little ditty is soon recognised as the_ Thomas The Tank Engine theme. Nice. From there, we get a set bursting at the seams with all the energy promised on record. They are at once fun, clever, danceable and clearly universally appealing despite their potentially isolating lyrical witticisms pertaining to British culture so specifically. Two albums in and they now have the catalogue to justify a headline slot. They look comfortable up there – a bit more banter would have been nice, but you can't have it all. They close the festival with _‘Nobody Does It Better’ to co-ordinated fireworks which perfectly encapsulates their humbleness through a tremendous grasp of irony. The big question is where they can possibly go from here. Excellent.

All photographs taken from the official SummerSonic website, which can be found here.