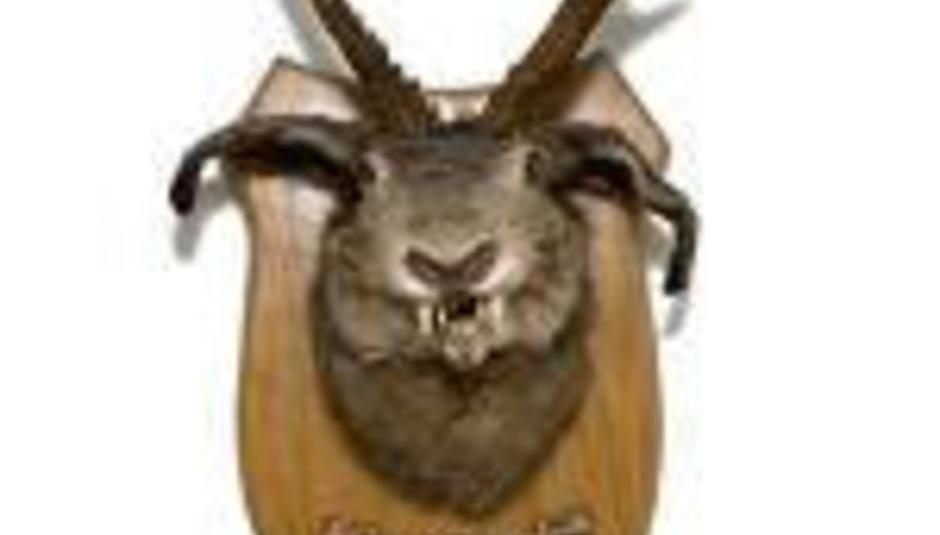 As toes are dragged back from Kimberley Hall’s manorial grounds towards Wymondham the fact that Tales Of The Jackalope has required quite so much effort begins to plague the mind. When weakly-wired eyes picked up that Gang Gang Dance have been pulled from the bill in the early hours - the event having passed its apparent curfew - it flagged up that the Vice-affiliated festival was somewhat masquerading under the title '24-hour party'.

On arrival a glance around. Announcements tacked to tents. “Circumstances. Out of our control. ESG. Not performing.” First blow. Start to find alternatives for mid-morning merrymaking. The fact that tracking down timetables is about as arduous as getting water to soak bitter tongues without shelling out shrapnel makes this some task. It also means that we fail to locate Chris Cunningham or Danananakroyd's billed performances.

Never mind. The beginning. Making like Tapes 'n' Tapes trying to get people dancing Glaswegian act The Phantom Band’s decent psych-electro excess is met with many a shrugged shoulder and it takes Lightspeed Champion to bound on stage for the hordes to provide the first attentive audience of the festival. People are forgiving. Rapturously received with what seems safe to declare as something of a departure from the Shoreditch sideshow that was Test Icicles, Dev Hynes - having earlier turned out in the backing band for Florence and the Machine - now marks ground between Bright Eyes and Jeffrey Lewis, with a warped comic-book humour through a country-folk pretence. Most seem put back by Hynes’ newfound composure but where his former act offered an unnecessarily relentless barrage of pretension-ridden influences, this all seems so unprovoking and tame. The decision to cover 'Buddy Holly' hammers a head on its innocuousness.

Comanechi lose their tops. The almost deliberately clumsily trodden. Ox.Eagle.Lion.Man and Chromeo - rarely paired-up for summarisation purposes - both suffer from the same pitfall: their sets are so self-satisfied and smothered in a lack of conviction that, for all the Beefheart/Prince aping, it all comes across like someone sarcastically hollering their way through a karaoke set. On the flip of that coin, These New Puritans - long derided as little more than an oddly amalgamated ode to their influences - demonstrate quite how significantly they have developed. Jack Barnett casts an odd centre of focus - top-button-buttoned, crippled claw outstretched – yet far more percussively focused than before, pained and lunken like slowed-down bullet bursts.

In the absence of ESG many find solace in Errors, whose soft drones and splintered glitches work to effect as dulled skulls sway. If ever an act had a trump card in a track it’s these Scots and 'Mr. Milk' and - if only for half an hour - the non-appearance from the Bronx beatniks is forgotten. Then, The Fall. Relying heavily upon material from the hollow and uninspired Reformation Post TLC, (RE: adjectives: particularly when compared to recent Tromatic... escapades with Mouse On Mars), Mark E’s ever-central contribution seems to have provided a new lease of inspiration. The set closes with Smith returning to the sidelines whilst his makeshift ensemble industrially charge on. He leers over as gurning buffoons howl for more. He turns and leaves the stage victorious.

DiS gets separated, minds scramble and end up separated glaring upon Dizzee Rascal and his cohort leaping around on stage. More focused than at Melt!, aided by tighter sound and a mangled crowd, front is customary even as revellers lag. Early material increasingly eclipses recent efforts; 'I Luv U' is brutal but basic, and 'Sirens'' desperate dirge drowns out Rascal's rasp. A catfight ensues between a few girls; slapping and biting and pulling at hair. The two are exhumed and expelled out through the crowd, boys laughing, warriors shrieking.

For most, Foals' performance is the first chance to see how working with Dave Sitek on their debut has warped them from their initially promising groundings. It hasn't. Whilst they are a tighter unit than before, there has not been the progression that many had hoped would have developed. Whilst the skewed innovation of Battles remains the root of their sound, there remains in this a Bloc Party-sourced yelping that can sometimes flounder. 'Balloons' seems to curtail into the next effort - all of a sudden it’s 'Mathletics' and our ears are oblivious in calling to question whether Foals are merely one trick ponies.

Similar accusations could be levelled at Fucked Up and Uffie, though without the easy humour. Bored, motion gradually becomes a means for warmth rather than for exploration. Minds closing in around us, we rock back and forth with other casualties in a tent watching Medhi being too lively for our eyes to really take as they start to seal over.

When the performances start to dry up around 4am and with only a few tents scattered throughout the grounds, it leaves many a heavy head on hay bails with little in the way of shelter other than a propped position against an oak. The scenic nature of the grounds provide the festival an impressive setting, but whilst it may boast a venue with the largest ash tree in Britain, given the ultimatum, with only one food stall on site serving spinach and ricotta twists, most would chose a mouthful over an eyeful. Rutgot... Gutrot... Fatigue and dejection have set in around the site and many start to amble back towards tents/cars/train station. Some hardy sorts battle the collective sigh by rocking up on the fell trunks dotted across the freezing landscape. Comedowns litter the gardens like wheezing black holes.

It's like a festival having been circumcised, serving a purpose but lacking in providing anything much in the way of true enjoyment. With reams of tickets going spare in tight pockets, curling like thin-cleaved skin we begin the joyless, 12-hour odyssey home to bed. No sleep on concrete, no sleep on trains, with little to rationalise the ache.