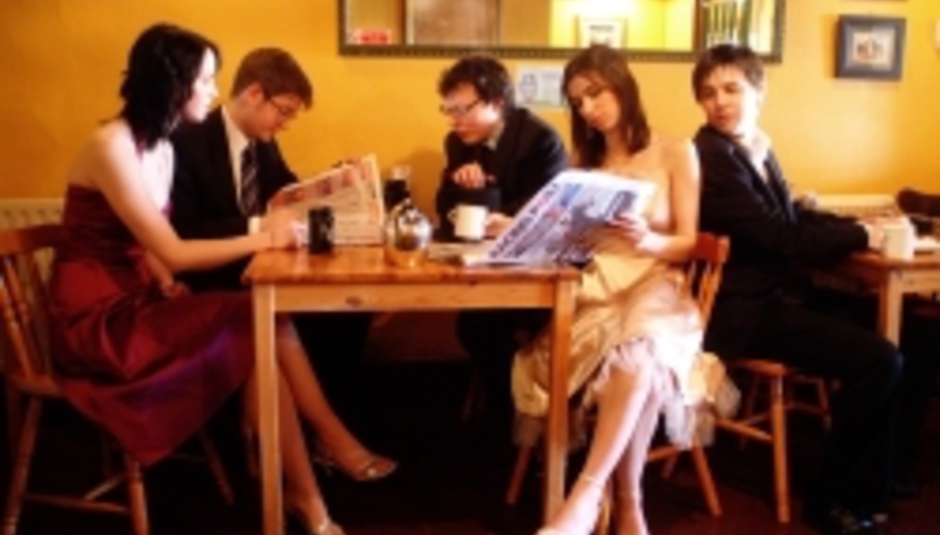 Believe it or not, there's more than one band in Sheffield sporting a primate inspired monicker. Aside from you-know-who there's also The Ape Drape Escape and my interviewees today, Monkey Swallows The Universe. The folk-pop five-piece's second LP The Casket Letters (their first release for Loose Records) finally hit the shelves this week so we caught up with singer Nat Johnson and drummer Rob Dean to let them tell us what on earth it's all about...

Nat: "I wrote this during a spare hour in the studio. The idea for it came out of a hungover conversation."
Rob: "You see this phrase everywhere, 'this or that will not affect your statutory rights', but nobody knows what it actually means."
Nat: "Most of our songs are either based on random stories, about hope and optimism or to do with resentment. This one's in the 'hope and optimism' category. It's a bit country - the first time I've ever used a lap steel."

Rob: "This was one Nat bought into the studio that we'd not heard before. She had the basis for the song which we fleshed out. That's how we tend to work."
Nat: "It's possibly going to be our next single. I think it's quite modern sounding for us. I wrote this before we had a record deal about how frustrated I was at not having a deal - we saw loads of other bands at the time getting signed who didn't seem to be trying as hard as we were. People were saying all these nice things about us, but nothing was happening - and that was annoying!"

Rob: "It's an old song - we actually released it as a single on Thee SPC last July. This one's about Nat's distrust of technology."
Nat: "I don't think planes can really work! They only stay in the air because people believe they can fly, and one day people will realise and they'll drop out of the sky..."
Rob: "Like when Wile E. Coyote runs off the edge of a cliff, as long as he keeps running and doesn't look down, he's fine. Nat believes planes are exactly the same."
Nat: "People have tried to explain them to me but it's just not true!"

Nat: "It's not really about anything, it's just stupid! But it's fun and people like it. This is actually one of the first songs I ever wrote - I didn't want to re-record it but everybody else insisted so I let them win that one."
Rob: "Usually Nat gets her own way, though!"

Nat: "It's based on a ghost story. The ghost of this boy appears at the foot of a grave every night and shouts 'it's not me', which disturbs the local villagers who decide to dig up the grave and move it somewhere else. They open it up and find it's full of stones, there's no body. The song's about what that ghost might have felt like."
Rob: "The song's much better than the story! It's the most folky track on the album."

Nat: "It's named after a race horse that ran the Grand National three times, and won it on the third try. I was nine years old, and it was the first time I'd ever won money on a horse. It's a love song about perseverance, written at a time I was losing the will to live because the band wasn't getting anywhere. This is the song that clinched our deal with Loose - by coincidence the guy who runs the label is married to the daughter of the guy who trained the horse. That swung it for us!"

Nat: "This one's tied in with the album title. Mary Queen Of Scots and Elizabeth I were cousins who never met each other but whose lives were completely intertwined. Elizabeth had Mary sent to death, and the Casket Letters were part of the evidence. It's a period of history I find fascinating. If you look really closely, there's actually a ghost on the album cover!"
Rob: "Nat started playing this in the practice room, and Me and Kev started playing really heavily over the top. It sounded good, so we went with it."
Nat: "It's nice to have a loud song because we've got an awful lot of quiet ones."

8. Ballad Of The Breakneck Bride

Nat: "Our tongue-in-cheek country song. Loose is known as a country label, so we thought we'd have a go at one! It's a typical country story about lovers dying. It's really good fun to play, and I wanted to do a duet on the album."

Nat: "I've had the beginning of this for so long! We were going to use it at the end of Science but decided to save it. It's another one for the 'optimism' category, about using your time wisely."
Rob: "Don't be in a rush to grow up, enjoy the present and don't worry about the future - that's the sentiment."

Rob: "I think all the instruments work together well - it starts with strings, the violin takes the lead at one point, then it drops out. It's one of my favourites, this one.
Nat: "This is probably our only proper love song. It's about sitting in fields in the afternoon, so it's good we've had a chance to play it at festivals."