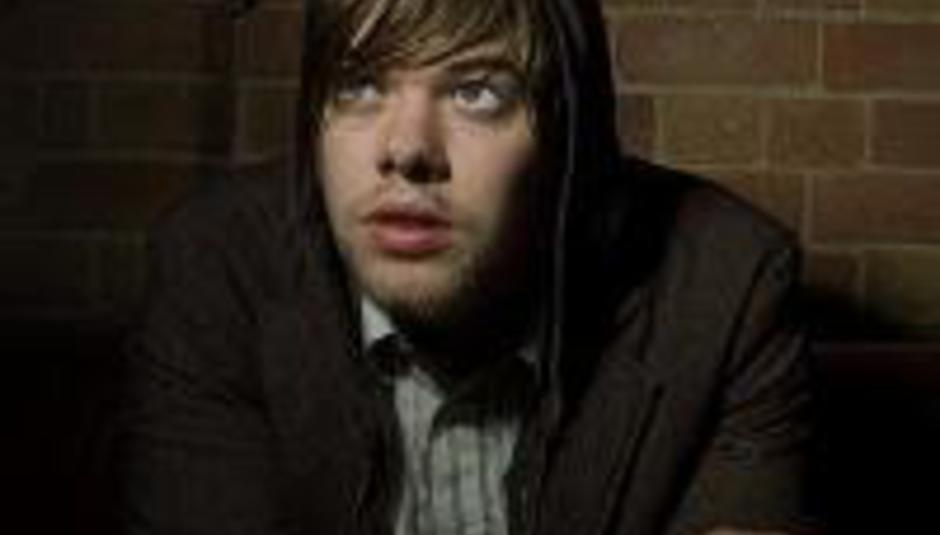 House Of Brothers is the solo project of Nottingham-based Andrew Jackson, formerly of avant-punk sound-scapers The Murder Of Rosa Luxemburg. While a selection of his former bandmates have pursued musical projects of the entirely acerbic variety – do see Lovvers, please – House Of Brothers’ acoustic indie-pop songs are a world away from the savagery associated with such ear-bleeding cacophonies. Introspective and understated, Jackson’s fine Elliott Smith-recalling work finds its way to a debut release proper in September, as excellent Oxford label Big Scary Monsters will then be issuing the Dead Man EP.

Jackson recently toured these isles of ours alongside Jacob’s Stories, and was kind enough to keep a diary, allowing us mortals-cum-fans an opportunity to gain an insight into a temporary life on the road. For more information on House Of Brothers, click to his MySpace here.

Beer in one hand, Bukowski in the other, the train speeds towards the bright lights of Nottingham. Tonight’s crowd couldn’t have been more different from Nottsville’s regular Cyndi Lauper-dressed and Russell Brand-booted Saturday night divas. Tonight’s audience was refreshingly older and more attentive.

However, firstly I was to meet my two estranged accomplices for the tour. Stu (aka Jacob’s Stories) awaited my arrival outside the train station, resting upon his grandly weighted piano (what I have quickly realised is going to be the bane of our existence for the coming week). Talking of foreseeable problems, to complete our three-man tag-team, please welcome our driver, Aidan. I have wrongly been led to believe that Stu and Aidan are old friends. However, Stu soon informs me that Aidan is an avid Jacob’s Stories fan whom he has only met once before. Being the paranoid fool that I am, my heart sinks and thoughts of abduction swamp my brain. This being said, the night went swimmingly; a very intimate affair with both Jacob’s Stories and Angus & Julia Stone putting on extremely captivating performances. A perfect start to the tour… or so it seemed.

Halfway to relocating Aidan’s £250 Ford Fiesta Calypso (!) to the house we would be staying in, the piece of shit died. It just stopped moving. The problem – no petrol. NO PETROL?! Is this Aidan character kidding me?! Grouping together a bunch of gig-goers we managed to push the car back to the house we were staying at. I need a beer or two. However, a time for relaxation soon turned to panic stations again when Aidan not only lost his Marks & Spencer work card amongst the Rescue Rooms masses, but also his mobile phone. I’ve got a funny feeling a hell of a lot more is going to get lost between the three of us over the coming seven days, and I’m not sure it’ll just be our possessions.

A beautiful show, but an unusual and slightly worrying start to the tour. My two stranger companions and I seem to be getting on well enough, but right now I’m wishing I was back on that train with my two reliable buddies: beer and Bukowski.

In the morning we’re off to the epicentre of euphoria - Leicester. Until then, goodnight and (hopefully) sweet dreams.

Early get-up for Aidan to walk (two miles in the wrong direction!) to fill up his petrol can. Nevertheless, we were soon set for the journey to sunny Leicester. On arrival it seemed my expectations for tonight were to be met – no-one is going to turn up. Well, that’s not quite true. Two blokes and Grace Petrie, the 16-year-old lesbian headline act, were present. Until poor Grace concluded that tonight “isn’t going to be the gig that gives me my big break”, and she quickly departed (leave your condolences here), leaving Stuart and myself that most appealing of tasks: to entertain an empty room. Regardless of this suspected ordeal, Stuart’s set left me in awe.

However, by the end of the night I’m not sure how happy he was with me. I’d been determined to churn up some sort of entertainment all evening. A hole had been left since little Grace had entered my life only to leave it just as fast. So I bought a few bottles of wine, three glasses, and hoped for some action. Luckily for me, not much time passed before Stu soon engaged into a ferocious attack on the US Government. Perfect! My opportunity to play Devil’s advocate and demand a reaction had arrived! Conspiracy theories a plenty, the wine was drunk and the bait taken, hook, line and sinker. …Bedtime.

Ate a dodgy ‘Posh Fish & Chips’. I think it was the ‘Posh’ bit that turned my stomach.

The show went well nonetheless. I managed to drag people from the comfort of their seats and stand up front therefore, in doing so, saving myself from feeling as if I was one of those middle-aged blondes who play beneath the smoky haze of a single spotlight mid-way through an especially heart-breaking episode of Ally McBeal.

Arrived far too early in London today. I love London, but I can’t stand traipsing about the place. However, luckily we were situated in Brixton, so there were beauteous sights and sounds a plenty. If you happen to be in Brixton with time to kill, you really should go for some drinks in The Goose pub – all the men have melted, Francis Bacon-painted faces, and the women barely resemble women.

The show was at The Windmill – a building that looks like a severely neglected community centre – and the owner, Seamus, breathes incomprehensible Irish through broken and alcohol-infested teeth. My kind of place.

People seemed to enjoy the show.

Back to Aidan’s place in Guildford tonight where hopefully my desire for a deep and lengthy sleep will be satisfied.

The house we’re staying at is far more interesting.

Dozens of empty wine and beer bottles, tacky fancy-dress shop animal masks, cheap women’s lingerie, and a few synthetic cocks (to each our gracious host has most admirably attached a small amount of his pubic hair, too) crowd table surfaces and litter the floor. I was soon informed that the residents of the house are making a horror film and that all of these items are mere props. I was glad to be told this information before I made use of the toilet, for inside a model torso lay limbless, propped up against a bottle of brown sauce and a rusty saw. This really is a house-of-horror.

Luckily for the budding film makers, below their humble abode lies a whore-house. They had managed to obtain the keys to the brothel from the delightful pimp who offered the dungeon and bedroom area as a setting for their film. How thoughtful of him.

We decided to use our day off wisely… and stay in Exeter.

Nonetheless, the sun was shining when we awoke. So, after demolishing an extremely large and salivatingly greasy full-English breakfast, us three troubadours embarked upon viewing the sights of fair Exeter. However, apart from the cathedral (and the half-naked beefcake buffoon who decided to use the cathedral gardens as his podium for the day), there doesn’t seem much else to see or visit. The cathedral was beautiful in any case. Far more beautiful than anything I was to see later on this evening!

Tonight has been the ‘big night’ for our resident film makers. Our host had placed an advertisement in the newspaper for a couple who would be willing to ‘model’ (in the loosest possible sense of the word) in an amateur horror film. They had received one positive response. And guess what?! Tonight was the night that they arrived for their ‘close up’. Without wanting to pigeonhole too much, I think you’ll know what I mean when I describe the couple as being “my favourite channel is late-night Sky One, and I’d do anything to be in ZOO magazine” sort of people. Within minutes of their arrival, our sweet and endearing host had their heads mummified, their clothes stripped off their bodies, and showed them to the dungeon area of the brothel where they were filmed as they proceeded to engage in acts of a sexual nature over the medieval wooden rack. Once they were done: £160 and a very warm handshake goodbye.

I decided to give the private viewing a miss. I was hungry in any case.

I’ll let you know when this thought-provoking existential thriller is due for release.

I was awoken this morning by those eternal words: “ I’m 36 and that’s the biggest one I’ve ever seen”. No, I wasn’t dreaming. My head had quite unfortunately fallen from the pillow and allowed itself to rest on the wafer thin floor. Beneath me the whore-house had obviously opened early for business. Time to leave.

And so to the last show of the tour. The big finale. The long goodbye… I enjoyed playing, and The Prince Albert is a lovely venue. But to be honest, once I’d struck the final note to ‘Lose Yourself’ I wish the audience hadn’t requested another song. I just wanted to go into town and watch Trencher perform. So I quickly got the playing over with and departed.

Show over. Trencher. Kebab. Conversation with a threatening and severely intoxicated Irishman. Sleep.

Brighton treated me well. A great place to finish the tour.

Aidan, Stuart and I started the week as strangers, oblivious to each others’ characters and pasts. I’d like to think we can call each other friends now, even though I’m quite certain that they’re glad to know that they won’t have to see my jaded face or hear my cynical voice for a good while yet.

A massive thank you to everyone who came to a show, put on a show, cooked for us or let us stay at their house. Special thanks to Aidan and Stu for being delightful company.

DiS-inserted note: House Of Brothers’ Dead Man EP is to be released in September. He plays at September’s DiScover Club date, on Saturday 22, at London’s Notting Hill Arts Club. Click here for details. For all other information and to check on future shows, visit the House Of Brothers MySpace, here. Thanks very much to Andy for keeping this diary and allowing us to use it here.