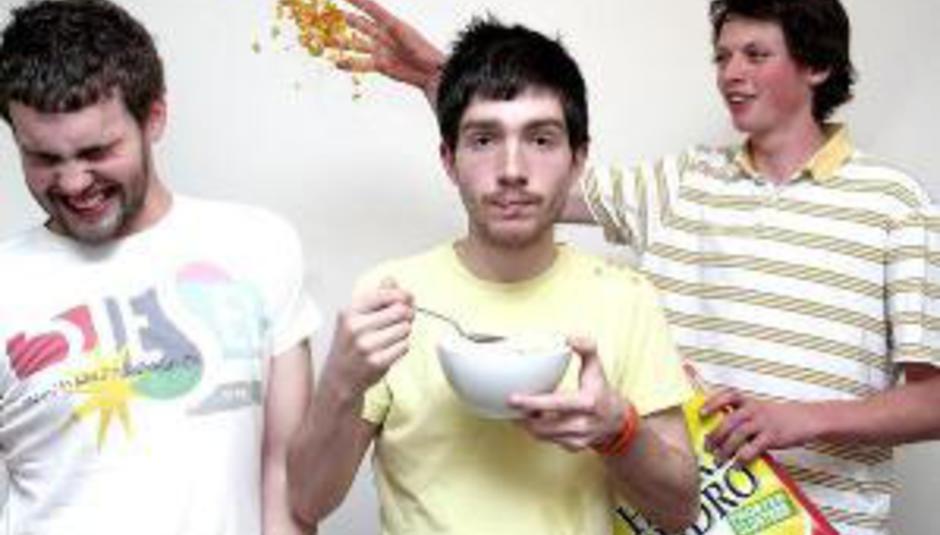 Herra Hidro are a Leicester-based trio mixing the tuneful indie-pop melodies of current chart-botherers like The Cribs and The Maccabees with angular post-punk riffs akin to the steely assault of Shellac and vocal harmonies to die for. Comprised of youthful sorts by the names of Calum Price (guitar, keys, vocals), Jake Wright (drums and vocals) and Luke Smith (bass, keys, vocals), the three-piece impressed DiS greatly at a recent hometown show – read the review here.

Always ones to go with gut feelings, DiS asked the band straight away if they’d like to come to London for a DiScover Club show. Kindly agreeing to our terms and conditions – i.e. they show up, play, and then get a little drunk – Herra Hidro are scheduled to open July’s Notting Hill Arts Club-housed DiScover Club. Also appearing are Vessels and Lovvers. Do please click here for more details.

With their first proper single, ‘Up Against The Bat’, now available to buy via their MySpace page – scroll down for link – the time seems right to DiScover Herra Hidro. Which is precisely what we’ve done.

First up: when and where did the band get together and, most importantly, why? Were you brought together by a love of similar bands, or a unified desire to make a racket, or what?
Jake: Herra Hidro was formed in the summer of 2003, but before that Luke and I were in a band with another guitarist, whose name can’t be mentioned for legal reasons. That band wasn’t so serious – it was just another hobby to accompany the days of skateboarding. We started actually playing our instruments because we were really into bands like Blink-182 and Nirvana, which went alongside the whole skating scene. A little later we became a lot more interested in the music, and decided to take it more seriously.
Luke: The reason we got together was partly the fact that it was just something to do.
Calum: I already was good mates with Luke and Jake – we shared the same music taste and skated around Blaby together though I never really got the hang of it. They asked me to join the band having booted the previous guitarist out due to undisclosed reasons, and the foundations of Herra Hidro were set.
L: With the old guitarist we all shared the same music tastes, but we realised he purely wasn’t any good at playing the guitar. Calum had a slightly dissimilar musical taste but I think that brought something extra to the band. Quality.

You’re steadily attracting more shows outside of Leicester – how have audiences been outside of your hometown so far, and do you have any dates planned for further afield, even, than London? Is a ‘proper’ tour out of the question at this point?
L: With out of town gigs, the reception has been good. But we haven’t played enough of them to really make a comparison.
C: They’re a little different at the moment, as the culture and humour tends to vary across the country. Saying the wrong thing at the wrong gig could prove to be deadly… know what I mean?
J: We feel a lot more pressured to play well and impress the audiences as this is not just a Leicester gig where all our mates will come and support us. We feel that we have to do ourselves proud, because we feel it’s a privilege to be outside of Leicester playing our own music. Ultimately all we want to do is try and convince people to like our music, no matter where they are from.
C: As of now London is the furthest we’ve travelled, though a tour with Public Relations Exercise is looking promising. We’ll then be visiting cities such as Newcastle, Sheffield, etc…
J: PRE are good friends of ours and we’re really excited to get out on the road with them.

‘Up Against The Bat’ is a bit jolly, and not a little dissimilar to a certain Yorkshire trio… it sounds like a ‘poppier’ take on what I saw from you live. Are you comfortable switching between really upbeat pop songs and more awkward, angular post-punk material?
C: I’m very comfortable with my sexuality, and who’s this Yorkshire trio?
L: We change the style of our songs to vary the set. It’s not a conscious decision to change. Our influences do it for us.
J: The way we write music is there’s never any plan of what were going to do in the song.
C: It’s like digging a tunnel without a torch.
J: Yeah, if someone has an idea no matter what style we will build on it, but always try to add a little Herra in there. It refreshes us and keeps us going when we change what we play. For example, Kaiser Chiefs songs all sound the same, and they’re shit.
C: If it feels good, go for it.

It’s your first proper single, is that right? What else, if anything, is available to delight the ears of those seeing you live and wanting to prolong the experience…? What about future releases: what’s forthcoming?
C: Yes, that is correct.
J: We do have a small collection of old demos, but you really do want to try and avoid them at all costs.
C: There’s the prospect of a mini-album on the horizon, with it being released sometime later in the year.
L: We are going to record some more material. The mini-album may even feature songs we haven’t thought about writing yet.
J: We aim to compress everything that Herra is about and put it into five or six tracks. Now we have experience in recording situations we feel that this release will be something we are truly proud of and won’t ever forget.

What other bands have you been compared to, if any, to date, and which comparisons have you been flattered by? Do you feel that press on the band so far has been positive? How close to the finished article do you feel Herra Hidro are as of now? You are still quite young, after all…
J: Obviously we’re constantly compared to Biffy Clyro, which is extremely flattering.
C: Also, a lot of comparisons to At The Drive-In have cropped up, and though we can’t really hear it ourselves it’s nice to be compared to one of your favourite bands. We’ve been genuinely shocked by some of the press – like DiS for example – which we really weren’t expecting. Though it’s good to know your hard work isn’t going unnoticed. That said, a comparison to Shawadywady would be nice to hear once in a while.
J: In general the press the band has received has been more positive than negative, which is crazy because back when we started out we never even thought we’d be featured in a magazine which reviews some of our favourite bands.
J: We are extremely happy with the way things are going at the minute, but I certainly don’t think we’ve reached our pinnacle yet. After all, the sky’s the limit.
L: We are far from the finished article yet. There’s more to come.
C: Herra are an unclosed book.

Who are your favourite bands that you’ve played with, so far? Any dream bills / acts you’d like to play with?
C: We managed to get a support slot with Reuben, which was immense, but some of our favourite slots have been with local bands such as Tired Irie, PRE and Death of London. There’s really a lot of good music coming out of Leicester and though it may be harder to find it’s defiantly worth it.
J: We also really enjoyed playing with Catsx3 and You Slut!.
L: Reuben! And we’ve got a show with Yourcodenameis: milo coming up soon, too. We’d love to play with…
C: U2.
J: Biffy Clyro.
C: Radiohead.
J: …and Rage Against the Machine all in one gig, it’d be faking mental!
L: I’d love to play with Yes.

Future plans for the rest of 2007… beyond?
L: Hopefully a better label and more press around the country… and keep doing what we do best.
C: To overtake The Beatles’ record sales.

For more information on Herra Hidro, click to their MySpace page HERE. See them in the flesh this Saturday, July 28, at DiS’s once-monthly DiScover Club show at London’s Notting Hill Arts Club.