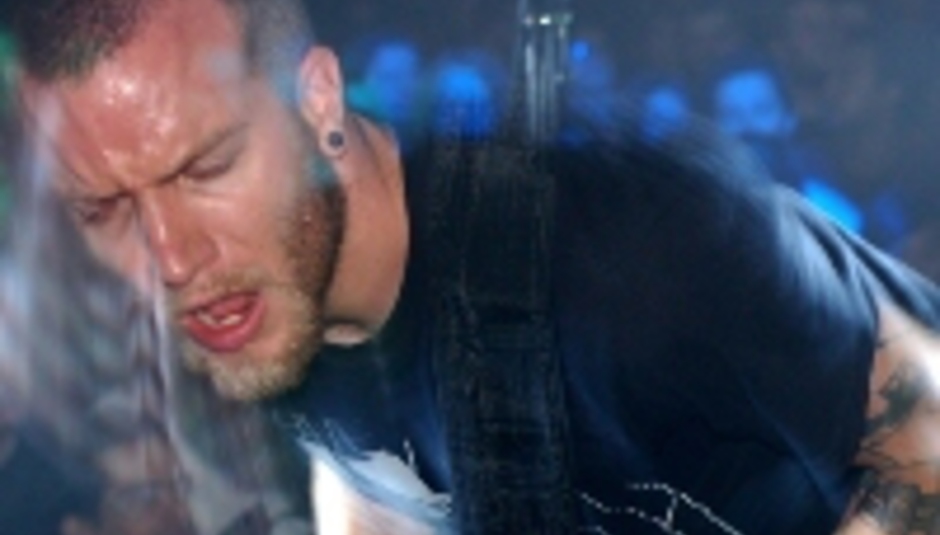 This weekend is a busy one on the festival calendar: in addition to the DiS-sponsored Dour (Belgium) and Summercase (Spain), there’s also Latitude in Suffolk. Expect to see plenty of DiS writers there if you’re scuttling along. This writer, though, will be in Birmingham for the always-excellent Supersonic Festival, now in its fifth year and this summer supported by DiS. Held at the city’s Custard Factory complex, the two-day event is organised by local promoters Capsule, and is headlined this year by Mogwai. The dates for your diary: July 13 and 14. Tickets, there are a few still available, but not many… Click the link at the article’s end for details.

Ahead of Supersonic ’07, DiS caught up with Lisa Meyer, one of the two Capsule types responsible for bringing the event together every summer. That picture: Isis, last year. Nice.

Hello Capsule! Please tell us who you really are, and what’s dominating your stereo right now?
Who we really are is Lisa Meyer and Jenny Moore and we’re not grannies despite what people say, but we do like cake. We’ve been listening and humming to Crippled Black Phoenix a lot recently, also been listening to Big Business, plus the William E Whitmore and Jenny Hoyston track that is on a Southern Sampler CD has been on repeat quite a lot, too.

Supersonic is now in its fifth year, is that right? What was the catalyst for starting the festival? Presumably you’d been promoting shows for a while before its establishment, as you continue to do now…?
We've been doing Capsule now since 1999. Basically, the way we started was because we both had pretty eclectic musical taste and at that time we were travelling round the country to gigs, as bands just weren't playing in Birmingham. We then decided that, instead of moaning about it, we'd start inviting bands to come and play in Birmingham. We realised that there was also a great amount of talent in Brum and wanted to find a way of supporting that by pairing up touring bands with high quality local acts. Birmingham is one of those places that has a bad outside perception, but once you come here you realise that there is loads going on. It’s just not very visible to the outside world.
After going to Sonar Festival in Barcelona we were inspired by the idea that niche audiences didn’t mean small, and that if we could make an event exciting enough we'd be able to attract a niche yet travelling audience, hence creating a larger-scale event. Many of the bands that play Supersonic are pretty underground, and rarely play to more than a handful of people, but if we can get that handful from every city around the UK and further afield to come along to Supersonic we have critical mass. As well as Supersonic we continue to do a year-round program of events and gigs.

Just how long, on average, does it take to pull together a Supersonic bill? Have there been acts you’ve narrowly missed out on, or are there any you’re still trying to get for future events? In a dream scenario, who would you pick as headliners, regardless of cost, or even whether or not they’re alive!?
We pretty much work on Supersonic year round: as soon as it finishes we start planning for the next year. You could say we are both pretty obsessive like that. We're massive music fans so we go along to loads of other festivals and gigs and are always on the look out for interesting stuff.
There are still plenty of bands that we'd want to have play. I guess if money was no object we'd have Lionel Richie play at the end of the night, to finish off the party. We know there are a lot of secret Lionel fans out there…

What’s been your most memorable Supersonic yet? Personally it has to be 2005, for Battles and Aereogramme and bombs that never were… and a nightmare of roundabouts on the way home…
Yip, the Year of the Bomb (review) as we like to call it now was pretty surreal; it was a few days after the London bombings and Birmingham city centre was fully closed down mid-festival, all the security got in their cars and we were left to evacuate everyone. But we remained very calm throughout.
Really enjoyed LCD Sound System with full band in 2003. At the time we just wrote to James Murphy and asked him to play, and it was the first show outside of London. Who knew they would get so big? Our second year was a bit of a nightmare, like a bad second album: the weather was shit, the crew we hired let us down, we couldn’t find a couple of the artists, and we were over tired. We learnt a lot from that year.

Can you see Supersonic expanding beyond the confines of the Custard Factory? While it’s obviously a neat venue for such an event, it isn’t exactly massive – would you like to run a Supersonic on a larger scale sometime?
We've thought about that quite in depth and we'd have to find a venue that was as suitable, somewhere that had loads of flexible spaces for us to program. It would be great to expand, but with that comes the idea of needing bigger bands to pull in bigger audiences which would change the nature of the festival.

While the bands are obviously a big draw, what else is there at Supersonic to entertain/inform the assembled attendees? It’s quite a multi-media event, isn’t it? There’s a very strong visual side to every event – aesthetic appeal, presumably, is as important to you as attracting a diverse and talented bill?
We have a great cinema program put together, this year by 7 Inch Cinema, and also Southern Records have dug deep into their archive to pull out some rare live footage from the likes of Sonic Youth (circa 1985), Big Black and Butthole Surfers… and documentaries on The Obsessed and Neurosis. We're also screening The Knife DVD on the main stage.
We have two exhibitions as part of the Festival, one which responds to the title of our symposium, 'Metal', and includes artists Lucy Mclauchlan, Savage Pencil, French, Gas, No Heaven Waiting and Mark Titchner. For the other, we've invited the Outcrowd Collective to take over one of the units at the Custard Factory and turn it into a mini gallery.
This year we are also holding a symposium entitled 'Metal', which will explore the West Midlands’ musical heritage. This is held on the Friday at the prestigious New Art Gallery, Walsall, and includes key speakers such as Jim Simpson (Sabbath’s manager for the first three albums), Nicholas Bullen, originator of Grindcore, and Mark Titchner, a Turner Prize nominee in 2006. We've always seen a close link with music and visual arts, and as such there is a very strong visual side. We both studied art at university.

Just how far do people travel for Supersonic? Is it an international event, or are attendees primarily from around the UK? Was the original decision to hold it in Birmingham simply based on the fact that said city’s sort of in the middle of England?
People come from all over the world, which is really exciting for us, as well as from all over the UK. The reason we hold the festival in Birmingham is because that’s where we are based; however, this year there are a couple of offshoot events happening in London - we've got a night with Plan B magazine at the Spitz with Oxbow, ZX Spectrum Orchestra and Duracell.

Do you try to ensure that no Supersonic is dominated by a single form/genre of music? While reports and reviews have praised the electronica aspects of events past, you’ve also booked a fair share of metal and indie acts, too. This year we’ve Tunng and Shady Bard, neither of whom fall into either bracket – just what is the booking policy, if there’s any?
The program has always been very eclectic in terms of genres, it’s just that people tend to just pull out what they know. Last year we had Broadcast, Hanne Hukkelberg and then High On Fire and Thrones; the year before, Rother & Moebius and David Cunningham (Flying Lizards) through to dälek and Psychic TV. The line-ups are always like fantasy football: we program acts we'd like to see and, in turn, hope other people will be interested in as well.

Any plans for 2008’s event yet? Already making approaches? What other Capsule shows are there in the near future that will be of interest to readers?
We’ve got some ideas for next year, a couple that we’ve already been chasing but none that we can announce. As for other events, we have a big show at the opening festival for the Town Hall in Birmingham, with Modified Toy Orchestra, Pram and special guests. This is particularly exciting as the Town Hall has been closed for years and in its former days had a lot of great gigs there, but before our time! It’s been fully renovated and is a beautiful venue now. We also have shows with High On Fire, the Boredoms and Acid Mothers Temple coming up, so best join our mailing list to find out more…

For more information on Capsule and Supersonic, and to join the Capsule mailing list for information on upcoming shows, click HERE. Selected shows include Russian Circles and High On Fire at the Birmingham Barfly on September 1, The Boredoms at the same venue on October 27, and the aforementioned Birmingham Town Hall show on October 15.

Below, DiS picks out some of our highlights on this year’s Supersonic bill…

Qui
Qui – from Los Angeles – were formed in 2000 by Paul Christensen and Matt Cronk; David Yow, of Scratch Acid and The Jesus Lizard, joined the band in 2006 after they’d already released their debut album, 2003’s Baby Kisses. A follow-up, Love’s Miracle, is out soon via Ipecac. Think punk-rock at its nosiest, played by men of an age where they should, maybe, know better… but where’s the fun in that?
MySpace

Shady Bard
Local boys (and girl) Shady Bard recently played DiS’s DiScover Club at the Notting Hill Arts Club; we were mightily impressed with how they translated the epic understatement of their debut album, From The Ground Up, to the stage. Expect melancholic contemporary folk-isms, swathes of post-rock builds and fills, and vocals dripping with thick soul and vision. Read our review of From The Ground Up here.
MySpace

Chrome Hoof
Do weirdoes come much weirder? London-based collective Chrome Hoof – whose Pre-Emptive False Rapture LP is out on Southern – are oddballs to defy all categorisations; even their own description on MySpace offers little guidance, mixing electro with death metal. Best bet: listen to the stuff. Just not with a full stomach.
MySpace

Beestung Lips
Punk as it, most probably, should be: noticeably pissed-off and acerbic like so few acts proclaiming to be ‘punk’ actually are. The band’s EP, Songs To And From An Iron Gut, is out via Capsule’s offshoot record label, and demands attention from anyone moved by the likes of Hot Cross, Hot Snakes and Hot… erm… coffee in the crotch. Neat, basically.
MySpace