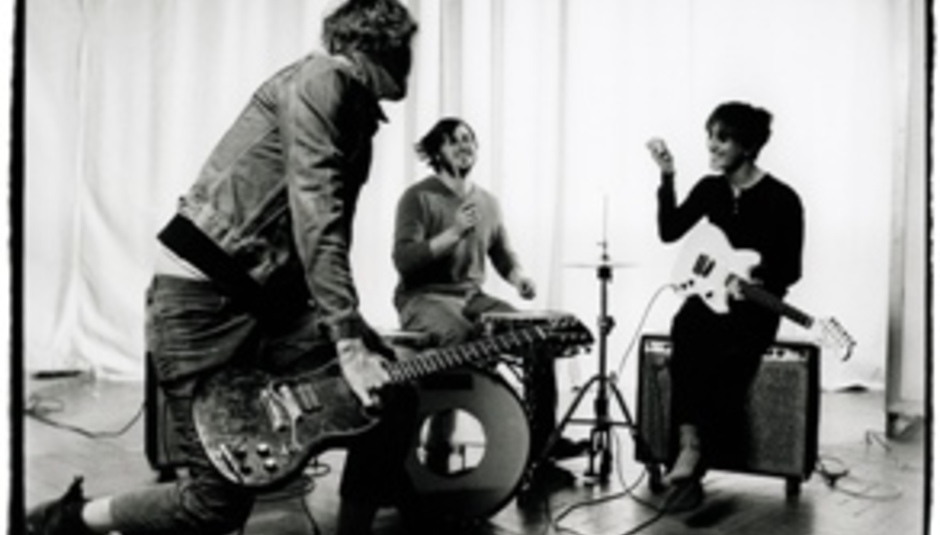 Liars have a new record. In something of a departure from an act that brought you such classics as 'The Frozen Glacier of Mastadon Blood' and 'Tumbling Walls Buried Me In The Debris With ESG', it’s simply titled: Liars.

No witch hunts or suchlike skulduggery; Liars is ambitious in the respect that it retains certain limits. The act's fourth record is less conceptually focused, yearning to tap into childhood nostalgia. Since the release of Drum's Not Dead in 2006 Julian Gross and Aaron Hemphill have relocated to Los Angeles, leaving vocalist Angus Andrew back in Berlin. Has it affected the recording dynamic? "We often find we were thinking about the same thing but just coming around to it from different directions," responds Andrew. Sat round a South Kensington hotel suite, we meet...

Liars, gentlemen, Liars. With the new record, whilst there is your fair share of standard noise-mongering, more so than on Drum’s Not Dead, there seems a focus on the pop sensibilities of it all. Was there a conscious decision to make something with a more conventional focus, away from the grand themes?

Angus Andrew: Yes. We had a goal on this record to focus on songwriting rather than anything else, be it musical or conceptual.
Aaron Hemphill: There comes a time after touring where we get ready to make a new record and Angus and I will talk about what we’re thinking about. It was the same focus on songs that connected and were influenced by things that had an impact on us when we were younger but were still relevant. So I think that is a powerful enough common agenda to make for a cohesion within the album. I think with this one unlike the other albums we feel comfortable with the tracks being separated and taken apart. It’s less academic and instead just putting out tracks that are really good.
AA: We were previously really concerned with that whole album concept to the point where we would wrap them quite nicely in concepts and images. We had similar ideas in mind but this time there was no sort of parameter that everything had to fit within. There was a lot more freedom to the process. We didn’t worry as much about how certain songs related to each other on the record because, again, the songs in themselves should be able to stand on their own. I think the plan was to tap in to when we were at a young age when we didn’t have any concerns like a job or rent and so music and your fledgling attempted love life was all you cared about. When I was younger I always just wanted to get away from my family. Not in a negative way but in way that I was ready to fly away.

So would you say the record was concerned with a youthful escapism then?

AA: Yes, with certain instances with certain songs but then equally there is a very melodramatic sense of love there.
AH: Things are based on very personal experiences to generate songs that have universal connections, and you draw from what you know and it becomes something people connect to more, maybe removing your source of connecting to that experience.


Liars - 'Plaster Casts of Everything'

As with Drum’s Not Dead, the record was self-produced in Berlin. Is it a place that provides an atmosphere that you actively seek to record in or more a matter of convenience?

AA: Berlin provides somewhere functional as a working place. It’s cheap and centrally located to places we like to tour. It was somewhere we were familiar with from the last record, so rather than a new experience using somewhere different each time - like we have previously - we wanted somewhere we knew we could get the most out of.

Compared to previous efforts, you spent a short period of time recording the album. How did that affect the final product?

AA: We spent less time sat round talking about it and was a matter of setting some deadlines and getting on with it rather than slowly working away at it. It defiantly feels a lot fresher to us now at this point than any other record has. Obviously there is a long lag, a long period of production, but with this one it seems really fresh and exciting to be putting something out in half the time.

Are there certain influences which had a particularly prominent influence?

AA: Just the ideas that you associate with many melodramatic bands like The Smiths or The Cure that maybe you remember listening to when you’re young and how those songs are really poignant and direct. They’re not about a concept the whole album has or anything like that but more the feeling of a particular song. Just any music that affected us in that way, the melodramatic romantic idea of music but equally anything else that when we were young floated our boat whether it was Guns N’ Roses or anything like that.

Choose a child. Are there particular favourites from the record?

AA: Well, yes, it is like choosing a child.
Julian Gross: There are certain kittens that are more playful than others.
AA: I like ‘Freak Out’. It’s Aaron’s song and I think it is this nice meeting point of his songs and my songs on the record, one of Aaron’s more conventional moments. These points come only with hindsight. They’ll be points when it will seem like Aaron is on another planet and I am worried how that will work out. But then we often find we were thinking about the same thing but just coming around to it from different directions.

After the release of They Threw Us All in a Trench and Stuck a Monument in 2001 to critical acclaim, Liars - then Andrew, Hemphill, bassist Pat Noecker and sticksmith Ron Albertson - took a turn. Noecker and Albertson went their separate ways from the band and Gross came on board. When They Were Wrong So We Drowned was released in 2004 it splintered opinion, distancing itself with many of the conventions that had landed Liars with crass associations as dance-punk. Here was a noise record to distance those notions. The album, recorded by TV On The Radio's Dave Sitek in New Jersey, focused around accounts from the Salem witch trials, and with winding instrumentation suggested the act had ideas beyond those that most had perceived. Drum's Not Dead followed in early 2006. Recorded in Andrew's new home-from-home Berlin its harrowingly isolation followed many of the disorientating traits of its predecessor but garnered vast critical acclaim for an album so conceptual. Sign o' the times?

With retrospect does it seem odd that whilst many spat out They Were Wrong... because of its change in direction from the first record Drum’s Not Dead, which actually shared many parallels, went on to garner such praise?

AH: I think there are a lot of parallels. Maybe it just took another effort to magnify different aspects of our sound for people to get involved in it. A positive to be drawn from that is that perhaps we have become better at conveying our ideas.
AA: Maybe people weren’t ready. Every record we look at as an opportunity to re-evolve. Or de-evolve. That one was probably the most written about. Change. Because it seemed to upset some people. I’m not sure if it actually did. So that one was sort of made significant, but each time we’ve done a record I think it’s been as significant as that change.

The Frieze show here in London was the last time you performed. How do you think the new material will transmit live?

AH: It seems odd because in the time between then and now we’ve recorded – practically released – a new record […]
AA: This is the record that most suits being played live. A lot of the intensity and the power of the songs can be communicated really well in that format but we’re working on it still.

Do you approach live performances with the aim of using material to complement or contrast with each other?

AH: We sort of build it so it complements. Certain tracks complement each other so that often it dictates what material we play. We’ve really focused on putting together a good show.
JG: I think increasingly we’ve focused on catering for what the audience wants. Like a lot of people particularly like ‘Broken Witch’ and if that makes people happy then we’ll try keep that in.
AH: But that’s more from past experience this presuming that they’re going to like it after we write another concept album. We spent a lot of time putting together orders for songs for live sets that have a flow that complements each other.
JG: I think it’s about tapping into your adolescence a little bit too, especially with me and looking back to thinking about what songs people like and thinking back to what I wanted to The Melvins to play and how excited I was when they played that song I wanted them to play and how excited I was when they played that song and how bummed I was when they didn’t.

AH: We thought about this a fair bit. It’s not that we’re not bummed that people got it for free, but I guess we want for its release to be exciting and not an apathetic sense of, "Oh, I got in yesterday", or, "Oh, maybe I’ll get it today". We download music constantly, and with the whole teen theme to it all it’s important to keep it exciting.

But with the elements you seem to pay a particular focus to - the artwork, accompanying DVD and all - do you not feel it can take the emphasis off the release?

JG: But at the same time you cannot really focus on it because that’s just the world.
AA: Really we’re stoked people would even would want to download it.
AH: I think it is important to remember what was exciting when we were young. Our exciting ‘record moments’ and looking at the environment now.
AA: Trent Reznor did well with that, right? He just started to make it a bit more fun, left in the bathroom and things like that. There’s better ways to think than just, “Shit, man…”
JG: You can’t anymore. For a moment you are disappointed like you would be a parent with a kid that keeps doing something bad and you’re thinking with the guy that originally leaked it and you’re thinking, "I’m just a bit disappointed that you couldn’t just wait", that this was selfish. But you look at all these blog comments and then it reinstates the excitement. "I hate track three, I love track four" and all this discourse with all these kids. It's refreshing.

Liars release Liars through Mute on 20 August. Expect a review over the next week or so. Want more now? WEBSITE. Nice. Liars play ATP’s Release The Bats party at London’s Kentish Town Forum - with Deerhoof, Black Lips and more - on November 2 – click here.