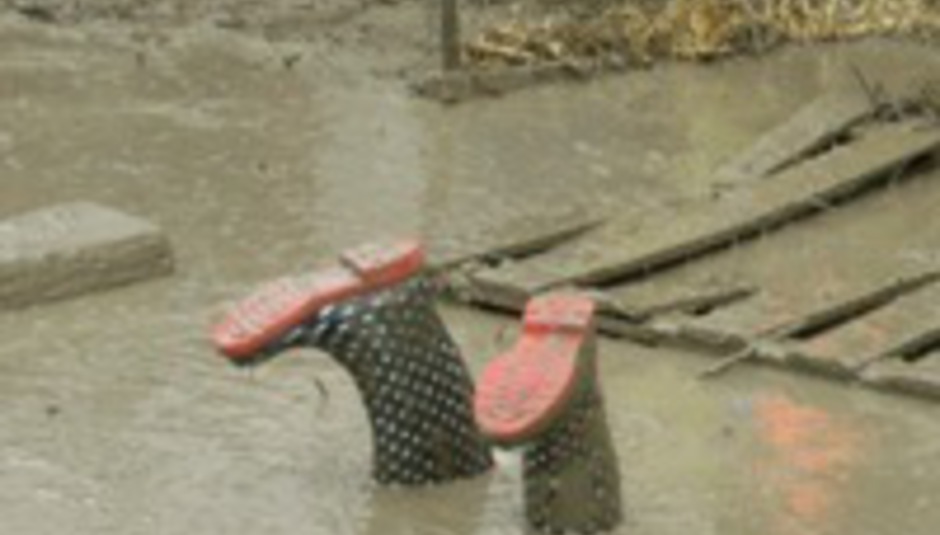 It serves them right to suffer. While some of us sat scratching our arses from the comfort of our living rooms, occasionally pushing the red button to keep Jo Whiley at bay, some idiots actually went to Glastonbury. But we're not bitter. No. It would have been nice to have an invite, but that's all history now. Here, DiS’s Ben Patashnik, Joshua Cole and Georgina Terry attempt to fashion coherent narratives from their weekends of mud-soaked madness… Friday brings doom and greyness, and that’s just Johnny Marr’s face. Over on the ever-gargantuan Pyramid Stage Bloc Party are attempting to bring a bit of menace to Worthy Farm and come up with a surprisingly energetic set. Opener ‘Song For Clay’ swoops and crashes accordingly, and as thousands of pairs of lungs bellow “East London is a vampire / It sucks the life right out of me” it becomes clear that they’re playing to a very partisan crowd.

As Arcade Fire kick off with a couple of the stronger moments from Neon Bible, ‘Black Mirror’ and ‘No Cars Go’, some of the crowd get a touch restless, even though the asymmetrical chaos onstage is translated into a brilliantly huge sound out front. Then the good shit happens. Lots of big-hitting tunes off Funeral means that, as the last light ebbs away, everyone becomes entirely transfixed by the insanity of a bunch of adults running around like kids, banging the hell out of whatever instruments they can find, to create something of pure majesty. Then it’s over to Glade for the mighty Squarepusher. He doesn’t play much of his ‘difficult’ material, instead choosing to concentrate on the mentally fast d’n’b that makes people dance like complete idiots, but it doesn’t matter – everyone surrounded by these illuminated trees is simply having it in a way that is completely alien to fucking Kasabian or The Twang. Euphoric bliss.

Saturday comes, and it’s basically mud, mud, mud mud mud and more mud. But The Bees are doing their best to bring a bit of psychedelic ska to the Jazzworld, and they succeed, at least partially. ‘The Chicken Payback’ raises more than a few smiles, but it’s the more languid material that gets the best response, mainly because it’s easier to bob and sway rather than actually skank.

Then shit gets weird. For some reason, Guillemots try to terrify everyone not perfectly sober by bringing out three dancing girls on stilts who just end up being more than a little disconcerting. Fyfe Dangerfield pinballs around the stage, almost with glee as the swelling crowd sings his lyrics back even louder, but on today’s evidence their attempts to create chaotic walls of complementary sound haven’t quite reached maturity yet. But John Fogerty, formerly of Creedence Clearwater Revival, has one thing to say. “I don’t know much about makin’ speeches, I just know rock ‘n’ roll,” he drawls, and by the power of Greyskull, he’s right. A flawless set of pure nostalgia to make everyone within earshot consider growing a flowing beard and pouring as much booze down their neck as is medically possible.

On Sunday, Cold War Kids attempt to get things moving on The Other Stage, but all the atmosphere they’re trying to create is swallowed up by the vast setting, as well as the fact that everyone keeps looking upwards and asking, “Is it raining? It is? Shit, better skin up now, then.” Funnily enough, Get Cape. Wear Cape. Fly. suffers a slow start but somehow marshals any remaining goodwill left onsite and focuses it into a set that liberally bursts with goodwill. The mass sing-along that greets closer ‘The Chronicles of a Bohemian Teenager Part II’ warms the heart more than a dozen Pilton Porkers.

Sunday night means Billy Bragg at the Left Field. With a more powerful set than usual, he plays the achingly beautiful ‘Tank Park Salute’ in tribute to Alan Miles’ recently deceased father, a move that is almost unbearably poignant. But then the righteous sing-along begins, and rolling out ‘There Is Power In A Union’, ‘To Have and to Have Not’ and ‘A Lover Sings’ turns the entire tent into a sea of raised cider cups. Billy Bragg _is_ Glastonbury through and through, and while the majority of music fans sneer at anyone seeking to make any kind of political statement, Bragg reminds us that the power to fight injustice lies within reach, without ever slipping into cliché. When did Björk ever do that? To close, a bunch of hoary old blokes sleepwalking through some half-decent tunes. Or not. The Who more than justify their billing as the biggest draw for the entire festival by strutting around with the energy of bands a third their age. Daltrey’s voice is strong enough to carry all the way to the back of the field and watching Townshend enthusiastically windmilling through ‘Won’t Get Fooled Again’ as the rain hoons down yet again is a true joy. Brilliant. Perhaps it was the depth of mud, quantity of rain and very rubbish choice of headliners. Equally it could have been the not pooing for nearly four days. Or maybe it was a result of the undisputed blanket attitude that YOU WILL HAVE FUN AT GLASTONBURY. Because. You just will. We’re all in it together. It’s Glastonbury, man. Enlightenment is practically a given. Whatever the cause, I’d be lying if I said I had that much fun in Pilton.

After Simian Mobile Disco’s failure to materialise for their ‘secret’ Thursday set at Q’s new Queen’s Head tent (‘Biggest Pub in Britain’ my arse), the first band I catch are The Cribs. Sure they are partially enjoyable, but I still cannot see how they are much more than a mild improvement on the dirge of Views-Fratellis-Automatics-Kooks et al clogging up the bill.

Judging by her stilted appearance in front of a dauntingly large Pyramid Stage audience, Amy Winehouse is either cripplingly nervous or coked up to her rolling eyeballs. It is hard to not be fascinated by such a striking figure, particularly as she is backed by some genuinely excellent music. Then it’s a mud rush to catch eight-piece New Yorkers !!!, who are absolutely incredible. Twice. From the tongue-in-cheek homoeroticism between the two captivating frontmen to their unashamedly dance crescendos, !!! are a rare live treat. “Now go tell all your friends who the best fucking band you saw at Glastonbury was!” shouts frontman Nic Offer. And he’s completely right.

The result of a !!! show is that whatever follows is involuntarily sapped of life. And so it goes. Watching The New Pornographers, usually so full of stomping joy and energy, is like a bad comedown. The band unwittingly come across like they have overdosed on herbal tea and custard creams, and it’s all !!!’s fault. Only blissful Lion King-esque set-closer ‘The Bleeding Heart Show’ successfully relights my fire.

When Saturday comes, fuck knows why Lily Allen is on the Pyramid Stage before Paolo Nutini. Allen is class, whatever you say, and in addition to performing all her sumptuous carousel Strawberry Pop-Tart tunes, she also unexpectedly reunites The Specials’ Lynval Golding and a morbid Terri Hall for a rendition of classic track ‘Gangsters’. Meanwhile, Maximo Park emerge to something of a heroes’ welcome. It seems their cruel_ NME _rejection has only gone and separated wheat from chaff, fans from scenesters, and their whole set is one united sing-along. So it wasn’t all bad I suppose. It’s just that blasted insistence on some non-existent magical collective festival-spirit mindset that irritates so much. It’s bullshit. But then I danced on a urinal with Banksy, made love to Lily Allen in her swan suit as Stephen Merchant watched, climbed Stonehenge at dawn on a bike with Doherty, went and dived headfirst into ten feet of mud before taking acid in a flooded tent with pregnant triplets, a 90-year-old World War One veteran who has been coming to Somerset since 1876, and a hairy Michael Eavis.

After an afternoon spent looking at cows, guzzling organic wine, experimenting with she-pees (who ever knew that writing one’s own name in piddle was quite so satisfying, other than boys?), and what will be referred to now as the ‘incident with security’ but must never be referred to again, it’s time for Kasabian on the Pyramid Stage. And golly, they look good. Both Serge and Tom, confident in cardigans, stride across the stage as if they own it. Yes, their anthems are pretty much interchangeable, but belted out across the Pilton countryside they have a swagger and confidence normally only achieved after many visits to the pear cider stall. And they seem to have recruited Noddy Holder on drums. Fantastic.

Arctic Monkeys, meanwhile, look nervous headlining the main stage, Alex’s “ladies and gentlemen” tic revealing the tension beneath their newly-buff exterior. But what could possibly go wrong for Sheffield’s new favourite sons? They’ve got the tunes, they’ve got a legion of fans; heck, they’ve even got a cover of ‘Diamonds are Forever’. What the Pyramid Stage hasn’t got though is reliable sound. Dizzee Rascal comes on for his verse of ‘Temptation Greets You like Your Naughty Friend’ and he can’t be heard at all. For a large portion of the set, only bass can be heard on the left side of the stage. What a shame.

Saturday, and CSS on the Other Stage are an exciting proposition. Again, the sound quality isn’t brilliant, but their high-energy electro tomfoolery is infectious, and the whole crowd dances about in the mud.

Calvin Harris in the John Peel tent is the most worthwhile trek of the whole weekend: Resplendent in a white tracksuit top with his own face emblazoned across the front, he and his band of merry midgets and both endearingly shy and triumphantly battered. If all the girls like Beck cocktails shaken by Les Rhythms Digitales then it’s no wonder he gets them. Truly fabulous fun.

While the above DiSsers were muddying themselves up in Somerset, a half-dozen others were packing for Hove, in Norway. The full Hove review will be up soon, but for the meantime check our blog HERE. It didn’t rain quite so much in Norway…