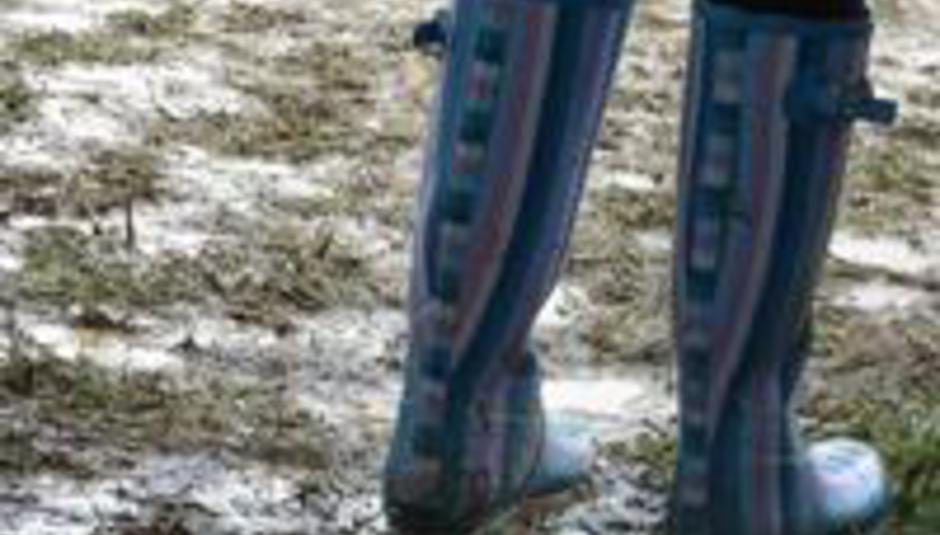 Disclaimer: This is not one of those comprehensive reviews; it's a quest for coverage that both documents some reactions to the highlights (with a few backstage insights) and gives anyone who wasn't there or was but 'wasn't' a clue as to what they missed. Onwards…

Quite a lot, frankly, mister noisy clown. Please quiet it down, yeah. We're still trying to steal some sleep...

Mud is a time machine. Mud transcends us. Mud makes Glastonbury legendary. Mud brings us back to what we were in a time before the birth of global capitalism and the industrial revolution and all its earth munching ways; before vinyl and tarmac, before cobbles, before the Romans paved their straight lines across Hardy's Wessex... Excuse me whilst I hug a tree (irony-free) and mould myself a mud shack.

My first footstep is a bubbles-beneath-yr-tongue-SQUELCH, but I don't care: I've got me some Wellingtons and I have a breakfast date with Conor Oberst and a strong DIY Irish coffee. Perfect. This is the Guardian Lounge one where he plays acoustic; he talk-sings about his war torn heart as he plays a guitar so teeny that it echoes and quivers like his voice; like a mini-me. The rain hits like a waterfall of drums on the tent overhead and some strings slowly begin to tickle the pages of people’s newspapers. A gentle breeze blows through my misty (and somewhat unnecessary) sunglasses and cools my sweat-some anorak. The minutes whoosh by and the lyrics are slowed down and put to the fore and slowly become little clusters of previously unnoticed epiphanies. What has someone/I put in this drink? I get lost in the idea that Bright Eyes is an Irish coffee, black both in thought and cultural pillaging but uplifting, complete with cloudy, milky skin. He takes the folk of the Irish but sloshes in shots of bourbon because of the way it hit the pre-rock 'n' roll blues in Tennessee and mixes it with the slave-song beans of protest. His words are so potent that the room is motionless and deathly silent. He plays only a short set which includes ‘Cleanse Song’ and closes with all those haunting visions of hope beyond suburbia in ‘A Song to Pass the Time’. Well, now, that's what I call a beautiful way to begin Glastonbury 2007!

The skies open wider as I wander toward Gogol Bordello. These gypsies without their concrete car parks feel so dang at home. If only home was a gigantic, half-built metallic Pyramid with a load of wet people in makeshift shelters, ankle deep in sludge; if only this could be a place to live. Gogol lurches and shrieks to the clouds, like they've run out of plates to smash. After a few chanties the rain all gets too much and my waterproof becomes something of a kids’ splash-proof watch at a teary swimming lesson. I run off like a wuss for proper cover.

Thankfully, Billy Bragg can whinge to himself a while longer and my rainlessness is found back in the Guardian tent for the best slice of LDN in the shapely of Adele. She's got a voice that quivers down your every vertebra like a lock-stocked Billie Holiday meets Erykah Badu or Jill Scott. Her set faintly tinkles around the room full of rain-shirkers, but despite sounding like dusty butterflies rushing in slow motion through Brixton it fails to make me cry a river this time around.

Watermelon is found. Disparate friends are lost and recovered as steamy screened phones decide they really don't like being filled with rain. First beer of the day is in its right place. Shit is talked. Emmy the Great is missed but reports back say she was charming. The Cribs make a big rant about the corporate nature of indie and get people in free Orange rain macks screaming back at them. The sun then thankfuckedly decides to come out.

It is okay to have favourites and heroes isn't it? Just don't ever expect them to do anything but constantly let you down. Expect them to make you look stupid every now and then and rarely deliver.

Then again... Bright Eyes (the ‘redux’ full-band edition) singing ‘First Day of My Life’ to a huge Other Stage crowd is a definite Glasto' 07 highlight. Possibly it is a life highlight, as he nudges the post-brat-pack anthem up a notch with cocoon-warmed chords at the sped-up pace of a schoolyard race. Conor, dressed all in white, is exactly what Glastonbury is all about, singing his potent and poignant songs about the pain of war right down to the most-touching detail ("is a bent up cigarette"), the ache of life, the idea of philosophical spirituality/meaninglessness versus the madness of religion ('Four Winds'), and them specs of beauty in the mundane ("leave autumn leaves on their swimming pool..."). Today a hero comes good on a promise: even after the first few songs this set is already becoming one of those rare, goose-bumps-at-the-thought memories. By the time the gigantic, double-drummed chorus of 'Calendar Hung Itself' tumbles us (I suppose!) into a better place, all that John Peel cussing stuff is forgiven and I'm left wondering: was I utterly alone in finding that deliriousness as hilarious as a Derek & Clive skit? In fact, all is perfect ‘til a guitar won't make a sound and the set is cut slightly short but it's okay because by that point all anyone wants to do is run off and tell everyone who missed this what a triumph it was.

Now for a walk up to the Park Stage, a new one Emily Eavis has set-up to give a taste of the olde Glastonbury for all those pesky purists who have a problem with careerist toss made and marketed for radio playlist automatons. Why the fuck are 'real bands' like The Fratellis and Kasabian here, anyway? Haven’t they got some mobile telephone-branded in-stores to be playing to a bunch of twunts who won tickets by sending an expensive text message? Shouldn’t this be restricted to the V festival, which people won a place at by getting through on the website in the three-minute window tickets were available? I didn't realise this festival business was so much about a competition to come to a place where you can buy E on every corner and dress up as a fairy if you feel so inclined…

…Martha Wainwright (aka our Martha) wanders on, strums her acoustic guitar and lets that voice ride through all her melodious amer-i-ndie-folk songs sprinkled in fucks and shits and beautiful imagery. It's a bit of the hits and some new song chasers. Newie 'Jesus & Mary' gets the Guardian journo I've duteously dragged along scribbling notes as the crowd participate in the woolooloolooo-ing... A bit of a triumph of a set, all told, and one of the best I've seen her deliver and topped off by a moving sing-along of 'Bloody Mother Fucking Asshole'.

Before I know it I'm stuffed in a bus to joyride around the site with Martha in a hunt for the Other Stage to join Rufus. Some blurry minutes of slurry wake-making later and I'm stood side o' stage and Martha's singing along, on TV, to a cover of Leonard Cohen's ‘Hallelujah’. Breathlessness takes over, damn you two!

I take a few moments to try to stalk Björk, but the search is fruitless and there're bouncers all around to wisely ward off the likes of me. So I decide to get some dinner but get distracted hounding girls backstage. Someone kindly sticks mushrooms in my pocket in exchange for a swig of my Wild Turkey and then I'm hooking pinkies with cuties and being led toward Arcade Fire to see if I can be converted to the sub-Mercury Rev, swirling, bashing, tink-tinkin' and warbling. I’m told you have to see them live. They take a while to get going, with lots of songs off the slightly dodgy second record (It’s so not dodgy! – Ed). Then things start to glow and they start dropping the hits all over the place, things swarm together and arms all around punch the sky. Then I’m singing along: what the crunk is a’doin? Something happens, and while it isn’t quite spiritual (not like watching Slipknot or Polyphonic Spree), it stems from the power of a devoted crowd. They finish, I’m happy. Good times.

Now’s the bit I’ve been dreading: who the hell do you go to see when your favourite space-rock band (Spiritualized), favourite pop band (Arctic Monkeys) and one of your favourite artists of all time (Björk) are all headlining different stages at the same time? What’s a boy to do? I opt to catch the first bit of the Monkeys. Are they playing yet? It’s oh so sodding quiet! Sadly, even after frog-marching 100 metres deep into the crowd, the sound volume doesn’t improve, at all, and if anything the people complaining gets louder and louder, burying the band. With Spiritualized light years of slurry away, I skip over to the Icelandic witch. There’s a forest of neon and day-glo bits in the distance. Her voice is gliding along dry milkways and the beats are crystal clear. The set rushes by with hit after hit from a parallel universe. My eyes are slammed closed. My mind is sat on her shoulder. She takes old songs and puts them on the same spaceship as the new ones. This has to be one of the greatest Glastonbury sets of all time. Quite simply, amazing! What a great way to end an inspiring day of music.

Writing implements are lost in the mud. No more words required today.