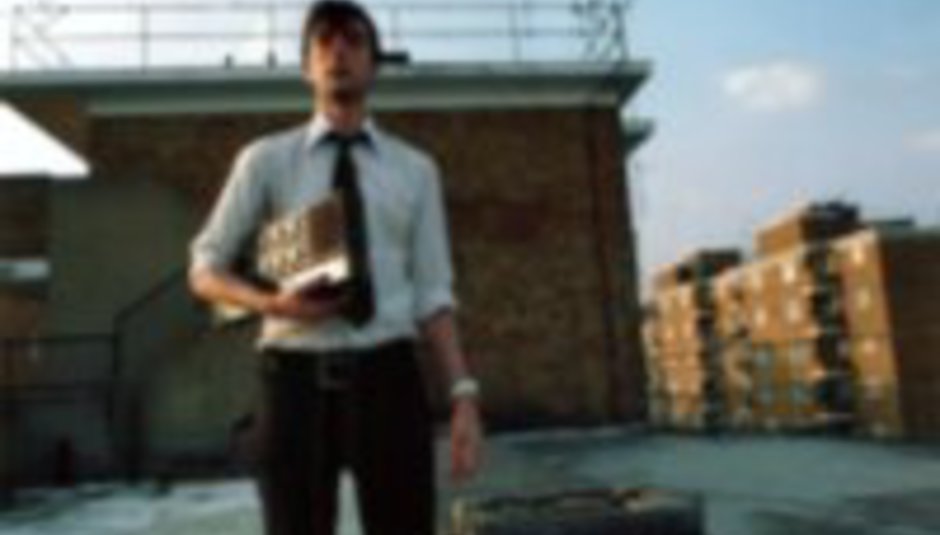 Sleeping States is one man, Markland Starkie. He likes noisy music and used to be in Norwich skronk heroes KaitO. Now he makes pretty music that's also quite brainy. Not so much different to anything else there, is there? No. There's not. But then you'll listen to Sleeping States and realise that there is a massively advanced level of natural musicality flowing through every work. Not to overly equate the man with dead people, but this gesticulatory flamboyance warrants the term 'composer' more than most people it is lazily thrown at whenever someone uses a clarinet or something. DiScover rushes in like a fool to greet him…

Hello. Tell us about how Sleeping States came about?
When I first moved to London, about five years ago, I moved with the intention of started a noise-pop/rock band, as I'd been in these types of bands for a while before moving and it was more my kind of thing than doing like a singer/songwriter thing. But I couldn't find anyone who was interested or who wasn't already in like four bands already - whilst this was going on I had been recording much quieter stuff on an old four-track cassette recorder, which I really had no intention on developing. It was more like... um, just something therapeutic to do in the evening after work. Anyway over time I built up a large collection of songs and (with some encouragement) started playing them live, and that's when sleeping states started. It was an almost accidental process that just snowballed basically.

You clearly have influences that are much harsher and noisier than your actual sound. Is there some sort of distillation process that your songs go through?
Well when I first started recording under sleeping states I wanted the songs to be as far away from my noise influences, just to really strip the songs down to the barest instrumentation possible and see what I could produce from those restrictions. But the more I've written, the more my noise influences have crept back into the songs. But then I don't feel that noise has to be noisy and loud necessarily - on the last single was a song called 'London Fields' which has these layers of white noise and radio static and noisy tape samples running all through it, but its still essentially quite a quiet melodic folk song. But then also, the live set tends to be a lot noisier/punkier than on record so I guess I channel my influences in that direction.

As a man who has clearly considered music from a more theoretical perspective, could you tell us how you re-inject some blood and sweat into those more academic ideas?
I suppose this comes down to melody - I consider the melodic aspects of Sleeping States to be pretty much at the centre of everything I do. Then once I've got the melody down I can concentrate on hiding it behind composed experimentations, heh heh. But really I don't think that 'cerebral' music or musical theory or whatever has to be mutually exclusive from the blood and sweat aspects of music, in that I feel as though the music theory that informs the stuff I write goes hand in hand with the emotional aspects. I mean you look at Sonic Youth or the Minutemen or newer bands like the Dirty Projectors, and they've all been active in making music that's intellectually stimulating whilst at the same time totally kicking ass.

You seem to be someone on the independent music world's collective lips an awful lot (Klaxons and Grizzly Bear name-drop you all the damn time). What's it like to be lauded so early on?
Ha, well I wouldn't really say it's that early on, Sleeping States has been chugging along longer than Klaxons for instance. But it's nice that the profile's been raised a bit. Having said that it means that I'm totally gonna be old news by the time the album comes out, heh heh…

You cite Stratford-on-Avon as an influence. Last time I was there, there was a little bloke going round the park on a mad multi-coloured bike with shiny bits on ringing a bell at people and trying to strike up conversations. Ever seen him?
Hmm, no I haven't, but it sounds about right. Stratford attracts serious weirdoes, people whose brains are too fried to find their way home after the Bulldog Bash, that kind of thing. I grew up there but I haven't really hung out there properly in a long time so maybe your guy is a more recent addition.

There is a freedom of tempo and dynamic to many of your songs that smack of impressionism. Do you purposely reject restrictions such as these?
Funnily enough these are things I started off actively experimenting with, and then moved away from whilst writing the new album, which I finished last year ('I Wonder' which is on the new single and album is, I think, pretty rigid and metronomic) but am now coming back to again ('Under a Capricorn Sky', also on the single, is a much newer song and, like you say, has a much more rubato feel to it, i.e. is much more free-flowing in terms of tempo and rhythm).

Though it's a hackneyed phrase, a lot of people are going to call you 'lo-fi'. If you had infinite musical resources, would your songs still sound how they do now?
I love a lot of lo-fi music and bands like Beat-Happening have influenced me a lot, and yes, my music has so far had a very lo-fi quality to it. Some of it has been so with theoretical intent (I released a cassette-only EP a couple of years ago that had an intently lo-fi quality to it) but then a lot of it has just had to do with what I've had available to me at the time. If I had infinite musical resources I would definitely get my future music to sound better, using better recording equipment and so forth, but I wouldn't go back and re-record my older stuff. They are documents of myself at that time and the lo-fi aspect is an important part of those documents. It would be weird to hear them sounding different to how they do now.

How do you make all this work in a live situation?
Well the live shows change depending on who's available at the time and the kind of place I'm playing in. I generally split all the guitars and keyboard samples and noises between myself and a friend of mine called Craig Gell, and then more often than not these days I rope in a drummer as well. Some of the songs sound like they do on record and some of them we've drastically rearranged. When I'm writing stuff I tend to swing between thinking "I should really keep the arrangement of this song to how I could play it live" and "fuck it, I want this song to sound a certain way and I'm just gonna worry about how to do it live later on". It's fun though, it keeps me and my band on our toes.

What are your songs about? There's a definite homespun aspect, a fair portion of dislocated drudgery in the lyrics.
Oh wow, well a lot of different things... I have at least fifty songs either released or about to be released so it's hard to generalise, but so far a lot of them have been pretty personal, not necessarily in a tragic emo way, but just about people and/or things that I have known. Little vignettes and stories about my life basically. 'I Wonder' is about a friend of mine whose mother died unexpectedly, and 'Under a Capricorn Sky' is a kind of dream-poem about Brazil.

What, if you had but one day left on this earth, would be the record you'd put on?
Damn, that is a tough one! It would have to be either Head Over Heels by the Cocteau Twins or EVOL by Sonic Youth... something totally goth and self-reflective like that.

Listen to Sleeping States on MySpace, here. 'I Wonder' backed with 'Under a Capricorn Sky' will be released by the Caspian Label on the 30th of July in a limited run of 500 seven inch singles. Label site.