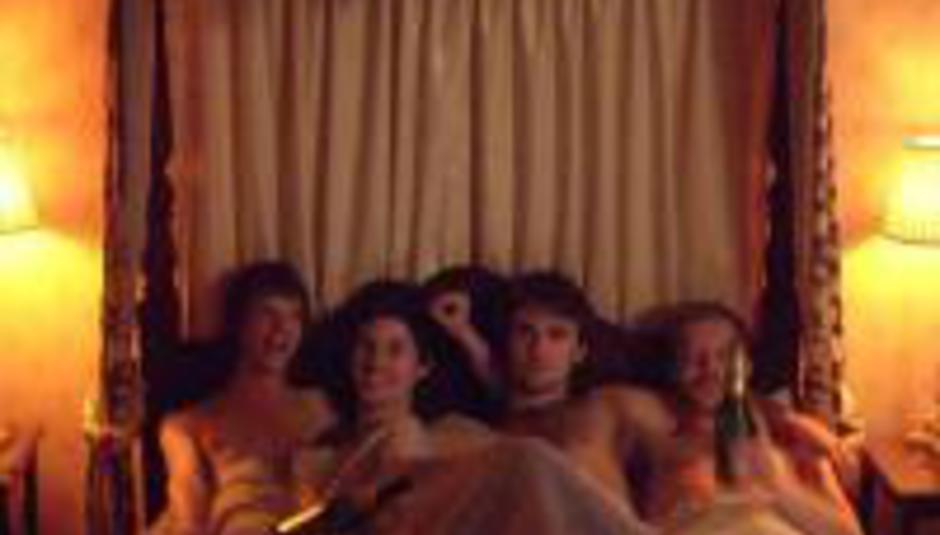 Leeds-based five-piece These Monsters - that’s Stuart, Tommy, Ian, Sam and, apparently, J to the L-O – are an act that could be categorised as post-rock, but the boundaries of said genre have to expand rather to fit the band’s saxophone-led compositions within its so-usually restrictive borders.

They are instrumental, that’s for sure, and they rock, of that there can be no doubt, but really: let’s not tarnish them with a brush with connotations almost exclusively of the negative variety. These Monsters are more than the sum of their parts; they’re a band who inspire and are inspired, and you can see them for yourself when they play this Saturday’s DiScover Club show in London alongside Yndi Halda and Shady Bard. Click HERE for all the details.

In the meantime, DiScover These Monsters (questions answered by Ian).

Simple start: the whys and hows of the band's formation. When did you get together, where, and what were members doing ahead of the coming together of These Monsters? Just who are you people, anyway? Do you like your crisps crinkled or are McCoy's a no-go for y'all?
We got together in first year of university after we'd all moved to Leeds in 2005. Sam and Tommy already knew each other from a previous band they had back in the ‘shire. Tommy met Stu on his graphics course, and we all lived in halls together. The band is Tommy, Sam, Ian, Stuart and J-Lo. We got J-Lo into the band because we'd heard what he'd done with Youthmovies.

The band is instrumental, yes. Was this the intention at the outset, or did you simply never get around to either recruiting a vocalist or having the courage to step up to a microphone?
We tried out having a singer for a few months at the beginning the idea was to use vocal effects. We decided there was really no need for it. We might have some people come in when we do the album, we might not.

Releases, to date: there's a two-track CD, a white 12" (I have both, mmm, very nice). Anything else? Are these releases widely available? What's cooking for the near (or not so) future?
Our releases are available from our MySpace (click for link) and a few shops in Leeds. The next thing we have planned is a split with We Vs. Death. In theory it will be out in September on Children No More Records. It'll be one song each, then it'll have us covering each others’ songs as well. These will be distributed by Cargo. The plan is to do a full-length next year.

Touring: do you get to play around the country much, or are your shows presently confined, mostly, to your local area? Have you embarked on any tours 'proper', and if so were they a particularly enjoyable experience? What's been your favourite place to play, and I do mean EVER?
Yeah we do a lot of one-off gigs all over, and we've done a few little tours. Best night out after a gig was when we played in Ipswich with We Vs. Death and Paul Marshall and the promoter sorted us out a hotel and everything, hence the naked band photo in the four poster (see above).

Could Pete Doherty drop any lower in your estimation? (Read THIS) He shags Kate Moss, fills his bloodstream with drugs and is stupidly rich. What a cunt.

Comparisons: you must receive some. I bet Sweep The Leg Johnny get the odd nod, what with the saxophone and all. Any comparisons you receive all the time, and are there any you wish you'd never heard?
Who? Reviewers tend to mention the bigger post-rock bands, such as Mogwai, Sigur Rós and 65daysofstatic, but it’s not really an issue for us.

And then: influences. What does influence the band? Doesn't need to be music - perhaps you write best after reading a really good book, or the Sunday supplements…
We’re influenced by a lot of different music, from bands like Isis to The Mars Volta to Warsaw Village Band and Jaga Jazzist. The writing process is just hanging out in our house, drinking lots of tea and enjoying some delicious reefa. We just have a good time and see what happens. Nice.

Leeds has a music scene of some repute, particularly in alternative (punk-ish) circles. What acts are coming through right now that you're particularly fond of, and reckon DiS readers should be discovering alongside your good selves?
Humanfly, Paul Marshall, Wintermute (playing DiScover in November - details), Year of the Man, Narcosis. Those bands are all amazing.

The DiScover Club show on June 23 - have you had the opportunity to hear the bands you're playing with? Looking forward to it? Fancy a pint after…?
We saw Shady Bard playing at the Brudenell Social Club a few years ago, and I remember thinking they sounded like a poor man’s Sigur Rós. Nah, not really: they were good, and I have got a free CD somewhere and it’s real nice, so it should be a good show. Listened to Yndi Halda’s MySpace and they’ve got some nice tunes… well euphoric.

Check These Monsters out at their MySpace site, here. For all the details on this Saturday’s DiScover Club show, click here.