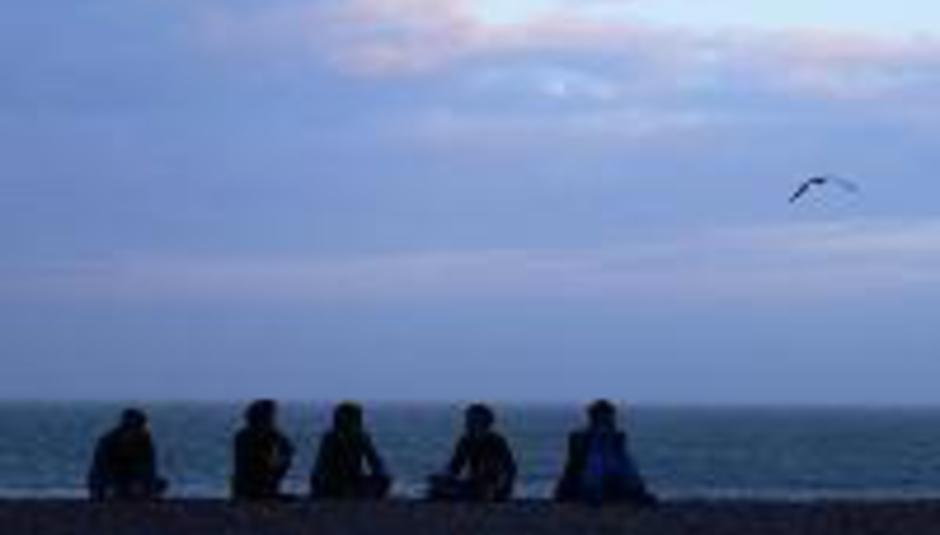 Yndi Halda are a Canterbury-based five-piece crafting the kind of epic instrumentals that seem made specifically to soundtrack the dying moments of some swelling star, or that second in a man’s life when his eyes first meet those of the lady he’ll spend each waking moment of his life with ‘til Death comes a knocking. You know – it gets you right there. This writer can barely contain the waterworks, still, whenever the band’s ‘We Flood Empty Lakes’ reaches its stunning climax.

Said song is taken from the band’s EP of earlier this year, Enjoy Eternal Bliss, released through the impeccable Big Scary Monsters label; the band also have deals in the US and Japan. The quintet – James, Jack, Brendan, Daniel and Oliver – are as stunning live as they are on record, too; it’s not entirely uncommon to see attendees at their shows quite literally lose control of themselves. You can witness said behaviour for yourself this weekend, as the Kentish rockers perform at the free-entry DiScover Club at London’s Notting Hill Arts Club, alongside These Monsters and Shady Bard.

Do please click HERE for all the details you’ll need on the show, which starts at 4pm. Our advice: do arrive early, as we’re expecting a busy one.

First question is almost always the same: where, why and how did the band form? Why choose an Icelandic name? Why be an instrumental band? What groups, if any, were members in before Yndi…?

How the band formed is quite easy, really. We were all school friends, and played in lots of bands together, gradually learning to play our instruments better as we did so. When we were around 16 we discovered bands like Tortoise, Labradford and Sigur Rós and we were absolutely stunned by their ability to achieve lyricism without lyrics and felt that we could do the same. We wrote Enjoy Eternal Bliss when we were around 17-18.

The band’s name is actually Eddic, which is an ancient Norse dialect that’s quite commonly associated with early Icelandic. It comes from a millennia-old poem called Odin’s Raven Magic, that we saw Hilmar Orn Hilmarsson – the Icelandic film score composer – perform and conduct a musical interpretation of a few years ago. There was something about the shape of the words and their meaning that completely captured everything musical we intended when we started writing those songs.

Enjoy Eternal Bliss picked up its fair share of flipping awesome – for want of some better adjective mangling – reviews around its release, and you’ve been tipped here, there and everywhere… just why, do you think, does the band have such a broad appeal?

We were completely overwhelmed by the amount of positive responses the record received. As I mention above, we were just kids when we wrote those songs, we had no idea that we’d be preparing to go to Tokyo a little while after the record was released. I like to think that our appeal comes from our expression of sentiment – we write and play joyously, and people like to feel joy – so if we’ve done as we intended to, then it’s recognisable in our songs.

You must be proud of the reception Enjoy… received, but was there any negativity at all? Would you rather stimulate an either/or reaction – a love or hate – rather than a shrug and an ‘it’s okay’?

We have had some negative reviews; I don’t think anything is unsusceptible to them. Those reviews seem to be largely concerned with the length of the songs and the lack of vocals, which is not something that really troubles us. I think I’d definitely much rather that reactions were polarised but passionate. I seem to remember someone wrote ‘mediocrity is the enemy of the good’, which seems quite applicable, but I can’t remember who said it or if it’s right.

Comparisons: I guess they’re varied, but within a certain field… does the post-rock tag blow a little, or is there no easily comprehensible alternative to it? What about bands: which acts are you most commonly compared to, and which are flattering (and which aren’t)?

Sometimes I wonder about the comparisons that reviewers make between us and other bands. I guess we didn’t really plan on ‘sounding like’ anyone else; we just wrote the sorts of songs that were the sounds of our heads, which just ended up as long, instrumental, and orchestrated with quiet parts and loud parts (songs, not heads). We don’t really mind the term ‘post-rock’, but I don’t think we’ve ever called ourselves it.

Names like Explosions in the Sky, Godspeed You! Black Emperor and Sigur Rós crop up quite often, but those are the sorts of bands that I think of when I say that it’s coincidence that people hear similarities between us. I prefer to think of us as something like ‘extended instrumental cinematic indie-folk with loud parts’. We listen to bands like the Arcade Fire, the National, Sufjan Stevens, Modest Mouse and so on, a lot more than the bands we’re compared to, oddly.

What about influences? Do the bands you’re often compared to rate as influences, or do you look beyond music for inspiration more often than not?

We definitely do find inspiration in fields other than music. We write in a barn at the top of a hill in a tiny fishing village on the south-east coast, and the view of the fields and the sea and the hills is a huge inspiration to us. Sometimes I think I should just show people a photo of that view to describe what we sound like – “we are this, in music”!

You’ve toured abroad, I see: do crowds on the continent vary, in particular, from domestic audiences? Do you feel that, as an instrumental act, you can be ‘understood’ in any country. After all, I am sure the emotional resonance in the songs translates across the board.

Continental crowds seem to be more honest than home crowds – they will say things like, “I enjoyed the first song, but your tuning was a bit off; also, the sound was not so good on the snare drum”. I think it applies in both directions – they’re less worried about potentially upsetting the band, but also less worried about seeming enthusiastic. When they like something, they seem to really like it. We sold every single item of merchandise we took with us, hundreds of CDs, t-shirts, vinyl, it was awe-inspiring and an incredible sensation that people were so excited, and that some people travelled so far to come and see us – a Polish couple drove 250km to Berlin for our show!

From the amount of people that were so willing to speak in English to us – so many, in fact, that our school-age French and German lessons were almost entirely unnecessary – I would guess that being an instrumental band doesn’t necessarily equate to having a non-locally-confined appeal.

Is there a follow-up to Enjoy Eternal Bliss in the works? Will there be a full-blown album, or do you treat the four-track …Bliss as your debut album (it is long enough, for sure)? Are things progressing positively, generally… in all matters musical and the business that surrounds the crafting of songs?

We’ve started writing some parts – which hopefully should be debuted live on Saturday – that we’re confident are the best we’ve ever written. They’re different from the EP; vocal, more mature and with more practiced instrument abilities (looking back at some of my guitar parts from the EP, they seem so simple and quite childish, really).

We don’t really consider Enjoy Eternal Bliss our debut album, because we’re not really happy enough with it to place all the stigma surrounding ‘debut album’ on it. We think of it more as ‘tentative steps before a leap’, which is especially true at the moment because we’re asked about the next record so often and so enthusiastically.

Also, forthcoming tours: are you venturing out in a van anytime soon? Any more trips planned abroad?

The next tour (actually we’re not officially titling it a ‘tour’, because of its brevity) will be in Asia: we leave on July 24 and are doing five shows in all taking in Hong Kong, Taiwan, Japan and China. We’re beyond excited about it! After the summer we’ll try to do another UK tour, before heading over the other ocean and playing to the Americans.

Have you had a chance to listen to the other bands playing on June 23… any opinions?

Unfortunately my computer’s a little too broken to handle mp3s currently, but we’ve played with Shady Bard before and we’re big fans. I’m looking forward to getting their record on Saturday. I’ve heard great things about These Monsters’ live set, too.