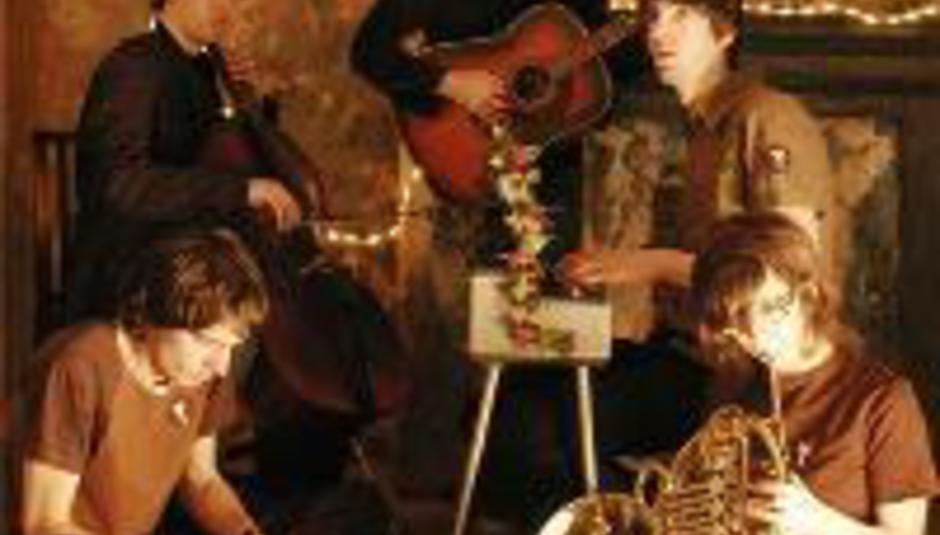 Shady Bard: from fragility to fullness...

Shady Bard: from fragility to fullness...

Birmingham-based folk-rock five-piece Shady Bard have just released, according to Alternative Ulster, “what could be this year’s best debut”. The record in question, From The Ground Up (on Static Caravan), attracted plaudits from across the critical music spectrum: Q magazine loved it, Uncut loved it, and DiS adored it. Read the review here.

The band – that’s Lawrence on guitars, vocals, piano, vibes, harmonica and loops; Jasmin on violin, vocals, French horn, samples and glockenspiel; Alex on cello, piano, vocals, samples and ‘cosmic noise’; Aidan on guitars, ebow, bass and effects; and James on drums and percussion (phew) – are in London this weekend for the one-monthly DiScover Club, held between 4pm and 8pm at the Notting Hill Arts Club. Entry is free – for full details, click here.

Righto, first: how and why did Shady Bard form? When and where? What were members up to, musically, prior to the establishment of Shady Bard?
We met in Birmingham. I was playing on my own and not enjoying the emptiness of the sound. The recordings were really layered and I wanted to recreate that, and so I started putting together a band with the aim of having loads going on musically. It all just sort of stumbled together from there. Jasmin and I put on gigs at Birmingham University and I found out she played violin and French horn and was partial to harmonising. I found out by chance that Alex, who lived in Leeds at the time, played cello and piano, at an after-gig party. Aidan moved back to Birmingham from Leeds and found us, and it all came together from there. There’ve been changes, several drummers, …Spinal Tap-style. It’s inevitable. We seem to have settled into our roles now.

The songs do have quite specific themes centring on the environment, which have been picked up upon in reviews – are you bothered at all, though, if listeners don’t necessarily pick up on the themes explored lyrically? If they enjoy the music, ultimately, is that enough?
The music was the starting point – loops and strings parts and warm sounds. It goes from fragile to heavily textured and full, and it’s kind of meant to lift the lyrical content and give it some hope. Some songs like ‘Bobby’ or ‘Treeology’ are more lyric led, but with songs like ‘Fires’ and ‘Torch Song’, they’re all about the loops and the building instrumentation. I’m really perfectionist but I like a happy accident, so I think you get a mix of scruffiness and preciseness in the arrangements. We like to pack the ideas into a short space as well, so it’s sort of like miniature post-rock with loads happening sonically, but in a three-minute song. And I hope that people pay the music just as much attention as any of the words.

From The Ground Up has been attracting the band a lot of positive press. You must be very proud. How long did the album take to put together, and is another in the pipeline? What other releases are/were available?
It’s been great to get the album out there. Some of the songs have been around for three or four years, so for us it’s been a massive build up. We started working with Static Caravan a few years ago and they’ve been brilliant. We did a really limited hand-wrapped EP and then a 7”, and then got to work on the album. We had it all mapped out and recorded, and then we went to the studio and took it up a level sonically. We worked with Robin Housman who’s a relative newcomer and really open to ideas. He has a background in electronica and hip-hop and alt.pop, and we talked constantly in minute detail about everything. That’s partly where the name From The Ground Up comes from – it sums up our production method and sounds well hip-hop.
To most people we’re brand new, but we can’t wait to get some new songs out there. We’re almost there on the next album – we’re demo-ing heavily at the moment. It’s a development – it’s orchestral and scratchy and fragile but also quite film-like and, lyrically, the themes are reaching further into new places. That’s all a bit vague, but we’ll play some new songs soon!

You’ve recently had a song used for an ad on MTV – are you in a position where you take what you can get (after all, it’s great exposure!), or did the theme of the ad in question, global warming, particularly appeal? Why has it vanished from YouTube!?
It’s amazing exposure – it’s going out worldwide. It was on MTV news the other day with Cameron Diaz gabbing over the top of it. It’s pretty surreal for us. The content is obviously very fitting and I think that’s why we’re on there but in a way it is slightly at odds with our message. ‘Saving the world’ isn’t a standpoint I identify with. ‘Treeology’’s about someone failing to change things – intervening and messing it all up. But I don’t think the ad execs care about that! It vanished from YouTube because we weren’t meant to put it up in the first place and The Man told us off, but now it’s on air it should re-appear again for all to enjoy!

On the subject, ish: just how important are the themes you’re exploring on From The Ground Up to you? It seems everyone in an indie band can take a pop at politicians, but few are so vocally bothered about global warming and the gradual deterioration of the Earth…
The environmental themes have been picked up on heavily everywhere but I think that’s a reflection of how those issues have suddenly become part of ‘the agenda’, whatever that is. Businesses and political parties are harping on about it so it’s in people’s heads. Our songs aren’t about saving the earth – quite the opposite I think: they’re about the futility of intervention. Like I said before, ‘Treeology’ is about messing it all up – it’s catastrophist. I don’t see an answer. Gradual deterioration is spot on actually because these things that are happening are slow and unknown and thinking you can save the world is naïve and in some ways arrogant.
For me, those themes are a way into singing about more personal things. ‘Penguins’ references global warming but it’s about other things entirely to me. We sing about guilt, blame, loss, break ups and uncertainty, but we wrap it in textured music which is meant to give it hope and warmth. Songs like ‘Winter Coats’ and ‘Memory Tree’ are really personal. And there’s a recurring theme of nature and the seasons and the world around us but I think that’s as much to do with living in England and a sort of misplaced nostalgia for those things, as with any of the issues that are being bandied about on the news.

It seems you’re already in the process of conquering the world musically, though, as you’ve signed a deal in Japan… are there other deals in other territories in the works?
Exciting news about Japan. We’re on the same label as Yndi Halda out there, so this DiScover Club gig marks that nicely. We’d love to get out there and play. Europe, too – that ought to be on the cards at some point. We’re looking further afield in all directions – we’ll see what happens. It’s a massive learning thing for us and for Static Caravan because we’re small operations, but we want to reach out as far as possible. Who knows!

Back in England, though: you’ve a handful of dates between now and the SuperSonic Festival in the middle of July, but will there be a proper tour anytime soon? Additionally, are there more releases planned for 2007?
Our April tour ended up being a ‘preview tour’ because the album was pushed back. We’re putting together a full UK tour in October. It’ll be great to tour with an actual record out for once! Recording wise: we’ve done a track which isn’t on the album (‘What’s Behind The Door?’) for a split EP on The Great Pop Supplement with Tunng. That’s coming soon. Static Caravan are doing a compilation with loads of lo-fi bands on for an Italian art project called Binary Oppositions, and we’ve contributed a song called ‘Long Term Solutions To The Seagull Problem’, so look out for that too. I don’t know if we’ll do another single from the album. There are potential singles but we don’t want to milk it too much. Maybe something hand-packaged; a Christmas single, perhaps…

SuperSonic: pleased as punch to be on the bill? How’d that come about, exactly? Any bands in particular you’re keen to see? Any other festivals lined up?
SuperSonic is amazing (link). The Capsule girls (organisers) are good friends of Static Caravan: Jenny Capsule did our press shots. We were delighted to be invited. Sharing a bill with Mogwai is unbelievable – we’re really excited about that. I’m not sure the Sunn 0))) fans will dig us but you never know!!

This DiScover Club this Saturday: have you had the chance to check out the bands you’re playing with? Great bill, isn’t it, even if I say so myself! And I did, just then!
These Monsters were in the crowd at our first gig in Leeds with iLiKETRAiNS almost two years ago, and we got to know them from there. Aidan knows them from his other band, Eaten By Tigers, who started out in Leeds. It’s great that we’re finally on the same bill as them! We did Club AC30 with Yndi Halda at Water Rats, and it was rammed. We’ve been in touch ever since and then there’s the whole Japan thing too. We’re really looking forward to seeing them again – I think there’s going to be some guesting going on this Saturday. I’d like to see everyone onstage together.

See said guesting in all its glory – if we can fit everyone onto the Notting Hill Arts Club stage! – for yourself this Saturday. Doors open at 4pm, and our advice is to arrive early. Click HERE for full details and HERE for Shady Bard’s MySpace page.