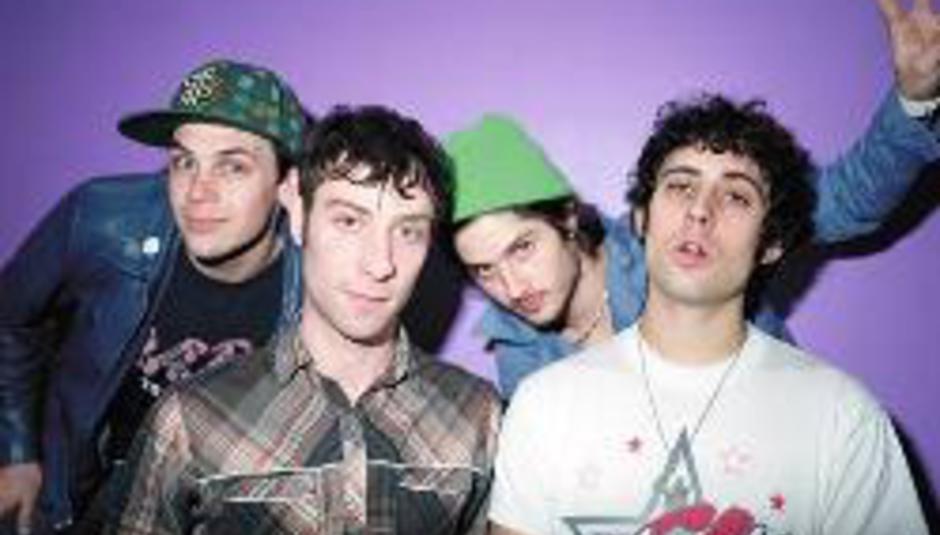 “All jobs have occupational hazards, but ours… I wouldn’t trade it for anything. We’ll gain fans and lose fans, but I’ll always love what we do.”

Ian St. Pe – Ian Brown in certain circles – has gold teeth. Ish. It’s a grill, or something, or a grillz. Fuck knows – the only teeth in my mouth are dulled white with ‘oles all over the rear some. He’s quiet until the very end of proceedings – fellow Black Lips Cole Alexander and Jared Swilley do most of the question-answering, while drummer Joe Bradley wears a mask of vacant satisfaction from under a particularly jazzy cap. With the exception of one, the Atlanta-spawned self-appointed ‘flower punks’ (the term doesn’t bother them at all, yet; a Klaxons-style reversal ain’t brewing presently) look a little dazed, via fair means or foul. Most probably the latter.

It’s late afternoon over London’s trendy east, and we’re a stone’s throw from the headquarters of Vice magazine. The location’s appropriate, as Black Lips’ fourth label in as many albums is Vice, currently finding its feet in the UK despite much acclaim and many a star act stateside. The as-yet-untitled album is due in September; a single, ‘Cold Hands’ is out now and reviewed here. There is, dare we suggest as much, a fair ol’ amount riding on the success of the forthcoming long-player – Vice, the italicised magazine version, has a reputation that’s hardly entirely enviable, and the domestic launch of label matters will be subject to cynical perusal. Some outsiders to the publication’s style-almost-always-over-substance aesthetic – it’s not like their critical musical round-up at each issue’s end is actually worth a damn – see it as trash, as something that only the purposefully fucked of hair and dishevelled of dress can appreciate, and even then only ‘cause, like, American Apparel models flash their teeny tits in it. (There is more to the magazine, seriously. Sometimes.) But whatever: it’s happening, the label, over here. Shrug a shoulder and deem it too fucking now for you and you miss out. And Black Lips really shouldn’t be missed by anyone.

“This is like our sixth time in Europe, or something,” mutters Bradley, countering the suggestion that many a publication will treat the band – still young of looks and retro of hooks – as newcomers. This time around, though, audiences have swelled. DiS caught the four-piece at Primavera at the end of May, and the swarming, arm-swinging dance mob down front was a sight to behold from the safety of the bleachers. Says Alexander: “Some of the shows, like the festivals, have been way bigger this time.”

“As far as England is concerned, though, we are a new band,” the singer continues, “even though we’ve been around for like seven years.” Bassist Swilley chips in: “A lot of bands that you see, who are getting the same press as we are now, have been around for a year, tops. With most they’re promoting their first album, but this one will be our fifth. We’ve done six European tours, and like 30 US tours. I think that’s healthy, too, as these bands that are just starting out have no built-in audience to fall back on, whereas we’ve worked our way to a strong cult following.”

The album that Swilley refers to, to take their tally to five, is Los Valientos del Mundo Nuevo, a live album released earlier this year through Vice; it’s from this LP that their recent single’s b-side, a live version of ‘Hippy Hippy Hooray’, was taken. That song’s original studio recording can be found on album three, Let It Bloom (review), and the band’s previous two records proper, a self-titled debut and the polar-oppositely monikered We Did Not Know the Forest Spirit Made the Flowers Grow , were issued in 2003 and 2004 respectively. Before, between and since, the group – whose line-up has shifted over the years; original guitarist Ben Eberbaugh was killed in a traffic accident in 2002 – have issued an absolute slew of seven-inches, more than many an act manages across a whole career. Productive doesn’t come close – the band carry a four-track with them at all times, in their van.

Let It Bloom was the first album to land in DiS’s lap – the label responsible, In The Red, has decent distribution channels, so the release allowed the band to tour more extensively, and build the fan base that’s stuck by them ever since. Says Alexander of Bomp!, the label that released their debut: “They’re amazing, but their heyday was the Seventies and early Eighties. In The Red, though – they’ve a few bands that have gone on to get more attention.”

One band that could follow in the footsteps of Black Lips is Demon’s Claws, introduced to the LA punk label by Black Lips themselves. “We A&R’ed them,” says Swilley. Alexander continues: “We didn’t even know we had done that until the label told us. They’re awesome.” Black Lips themselves may well have further recordings coming out via In The Red, as Swilley explains:

“We record a lot of songs, and then we only ever use some of those. And we’ve a load of songs we’ve recorded on our own. I don’t know how many, but we’ve a bunch of unreleased songs sitting around. We want to put it all out eventually. A lot of the lyrics are written in the studio, too, usually about ten minutes before we record them!”

“Sometimes in the studio, we’ll start doing a song but then add a load of stuff live, but it’s too late to add to the recording ‘cause it’s done,” continues Alexander, with Swilley ending his train of thought: “There are a lot of songs that I like better the way we play them now than the versions we recorded in the studio.”

The Black Lips live experience has something of a considerable reputation. Although in DiS’s experience we’ve witnessed none of what follows in a neat list format, past gigs have reportedly featured: vomiting, nudity, urination and fireworks. You could probably summarise their shows as being, generally, some fucked-up shit. “Playing live is how most people know us,” says Alexander, with Swilley following right behind him again: “Touring is the only way to make money in music right now.” Certain members of the band prefer their sound on record, but they openly admit that their live sets are often pleasingly chaotic enough that any shortcomings are overlooked. “The nature of the show does kinds make up for if we don’t sound so good,” fesses Alexander, “but it does suck afterwards, sitting in a van all day, hungover.”

“I’ve been to a million places, but I’ve only actually ever seen bits and pieces of these places,” comments Swilley. “But I do make a point of trying to stay a couple more days whenever we’re in Europe. There are a few cities I’ve spent time in, but loads I’ve never really seen. We played Vienna, but I’ve no idea what Vienna looks like.”

From D.I.Y. roots – the band previously booked all their own tours, and essentially managed themselves – the four-piece are now handing a degree of control over to parties within The Machine; they are integrating themselves into, for better or worse, the industry with the worst reputation in the world for chewing up and spewing out new recruits. As Swilley explains the process – the slow-moving recruitment of booking agents and the like – his face screws up a little: clearly there’s still a little discomfort in the ranks at allowing people who you’ve known for five minutes or less handle your concerns. Fuck, the band don’t even really know the people working their record online, and they work in the Vice basement. Nice people they are, trust.

Certainly the band’s relaxed collective posture and lackadaisical responses to DiS’s questions backs the theory that Black Lips are riding a wave right now – feet up, happy to fall wherever and whenever it breaks. After all, breaks are few in this business, and with that album four looming, all thumbs appear to be pointing upwards at this initial stage. But what of matters beyond music? Soon they’ll visit Israel…

“I think we can solve all the problems in the Middle East,” jokes Swilley. “The people that come to see us – they’re all likeminded. Everyone’s happy.”

“We’re a real primal band,” says Alexander. “Audiences react similarly everywhere, in the western world. We’re trying to get away from the ‘retro’ thing, but rock’s been retro forever! Our music uses the same rhythms as these Sixties songs…”

“Like, A Britney Spears song these days could be a Shangri-Las song, just recorded with different techniques,” adds Swilley.

And, finally, what of that new album? With a bigger and brighter deal, are the band’s raw, lo-fi roots to be jettisoned for something a little cleaner and more commercial?

“We recorded the new one in an even cheaper place than the last one,” answers Swilley, straight up.

That’s us told, then. Recorder’s clicked off until St. Pe intervenes: “I wanna say something.” He looks like he’s been through a couple of wars; most photos of him in the press find blood on his shirt and those gold teeth dulled by the grime of another flea-pit conquered.

“I’ll always love what we do…” The flashed smile’s sincere and genuine, and one reflected immediately by his bandmates. Fucking trendy rock blah blah whatever – let Black Lips swagger you about a room full of half-drunk revellers and you’ll be moved in a fashion that no flash-in-the-pan scenester shit-weasels could ever manage. This shit is real, honest and so brilliantly out of time that it could never be a product of the Here and Now and nowhere else. For Vice’s failings, of which there are many in the eyes of far more than a few, it seems they’ve opened their recordings account with a winner of a band.

Black Lips can be found on MySpace, here. ‘Cold Hands’ is out now on Vice, and their fourth studio album follows in September.