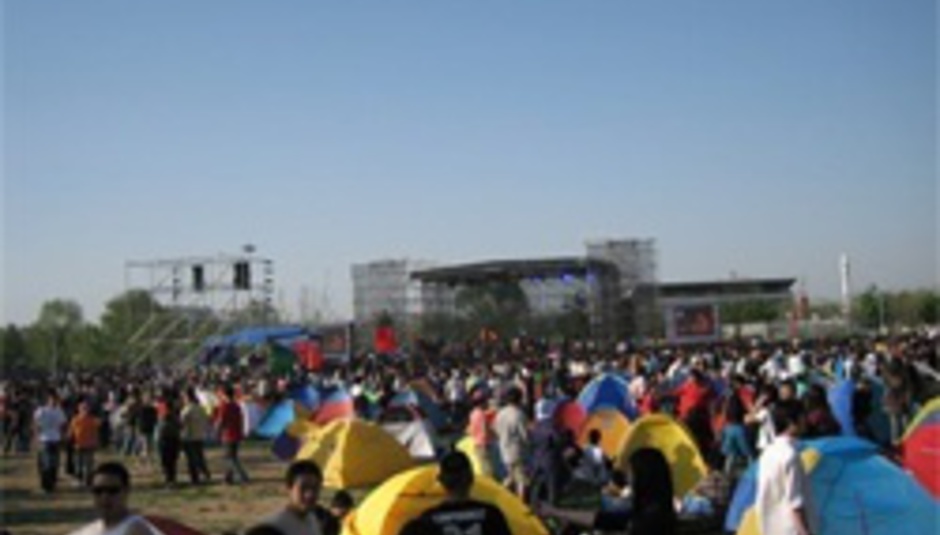 Okay – now I have some sick shit to write about. China rules!

We got on the plane to Beijing – had a safe flight and all. Landed – no problems with the customs – and everything went smooth. We met up with our Danish guy, Martin, over here. Checked in at our hotel and had a rest before we went out for dinner and drinks.

1st of May and first show: The Midi Festival.

Everything seems to be a bit chaotic when we arrive at the festival. And chaos is the main subject over here. More about that later.

Time for a soundcheck. Normally it’s pretty fast, but there are issues because of the language. Only one person on the crew (out of 100 or so) speaks English. And we don’t speak Chinese. So things are a bit tricky, but it works out okay, and we play a couple of songs to make sure that everything works fine. Around 300 people are already in front of the stage screaming for more.

There is no real backstage – there is a press tent where we hang out a bit, and talk about today’s schedule.

All good so far, but still everything seems a bit chaotic.

We take a walk around the festival area, and get a few beers, and check out the tents with shirts and other stuff. And then the madness begins, and this is no joke: I think we got something like 500 photos taking during the afternoon .With fans that knew who we are – and with people who just wanted to take pictures with those tall, weird looking guys from some other country.

Every five minutes some guy came to us and said: “Please, take picture?”
So weird to be in that situation the whole day – but fun. Met a lot of fun people. Later on we got told that people are considering us as being the headliners that day.

Interviews are being conducted and more photos are being taken. I’ve already got a bad thing going on in my body – had it from the early morning. So I am forced to visit the toilet three times that afternoon. And it’s no fun being two meters tall, and then taking a shit in a small closet with a hole in the floor, ha ha…

Showtime. Mayhem – that’s all I can say. Never found out how many people were there, exactly, but we think somewhere between 15,000 and 20,000. And everybody is into it. Crazy!

After the show we go to this venue called Star Live. Our new buds from Rock Hard Power Spray play there. We all get drunk, and the rest is a blur. Will be back tomorrow with a report of our second show.